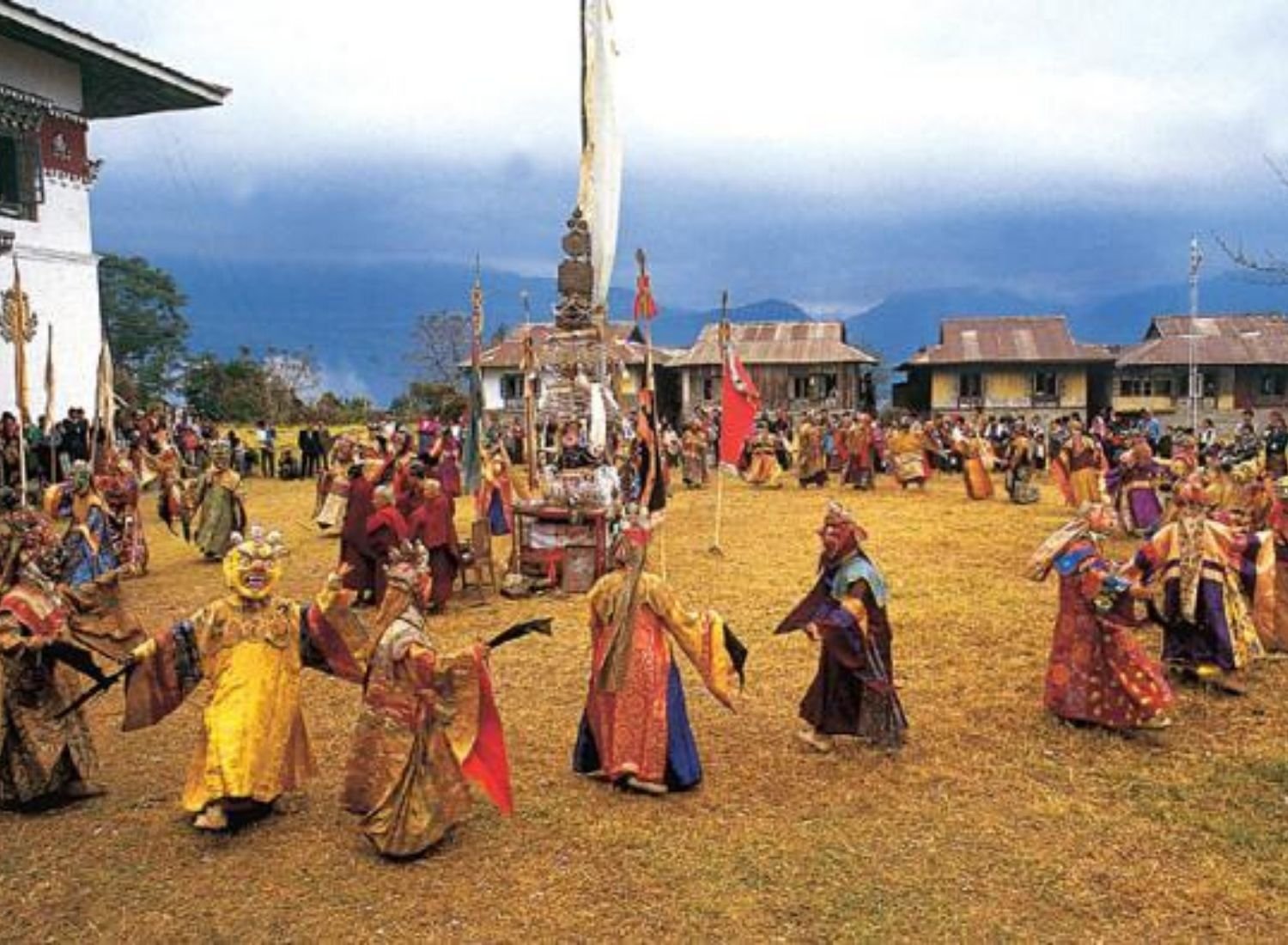 Dance, music, frolic, gorging on delicious food, mingling of different races and religions, and having a gala time – this is just how festivals are celebrated. India is a land of festivals. Every season is filled with lovely festivals. It is as if throughout the year people worship, spread happiness and colours. This is only possible in India. There are various uncommon Indian festivals celebrated in different parts of this country, which you might not be familiar with. And if you know about them, you might not have had the chance to visit the places and witness the festivities. Here are such 8 uncommon Indian festivals for you.

This is one of the uncommon Indian festivals that is celebrated every winter in January and February by the people of Assam. Therefore, it is also called ‘Magh Bihu’. This festival continues for four to five days. This is mainly a harvest festival that marks the end of harvesting season in the month of Magh.

On the first day of the festival, that is, “Uruka”, the young people of the village erect makeshift huts, known as Bhelaghar and Meji, from the bamboo, leaves, and thatch used in harvesting crops. At night, people gather around a bonfire, cook dinner, dance to the beats of dhols, and engage in merriment. The Assamese people also distribute the famous rice cakes named Sunga Pitha, Til Pitha, etc., and snacks as well. The traditional Bihu dance of young Assamese girls in Mekhela is very beautiful to watch. Other features of the celebrations include traditional Assamese games such as hen fighting (Kukkura Jooz) and Jallikattu style buffalo fighting(Mohar Jooz).

‘Kha, piye, and majja kar”. In other words, eat, drink, and make merry. This is a Konkani message which King Momo traditionally preaches during the Goa carnival. The origin of this festival traces back to when Goa was a Portuguese colony. It was then celebrated according to the Portugal Catholic tradition- Mardi Gra. Usually, the carnival starts on Fat Saturday (Sabado Gordo) and ends on Fat Tuesday (Shrove Tuesday), just before Ash Wednesday and the first day of the Catholic fasting season of Lent.

During the carnival, people dress up in colourful clothes, and you can see several people taking part in the Saturday parade. Dancers, musicians, fire-eaters, vendors, acrobats, jesters, women, and older men in comical clothes – it is a pageantry of sorts. The other enjoyable activities, including Khell or Fell, the one-act folk plays are special features of the carnival. It happens to be a delightful time for food lovers too. You can get a taste of the special Goan sweet ‘Bebinca’ made out of a coconut, jaggery, and butter as well as the mouth-watering dishes, such as Chicken Zacutti. Do not forget to participate in wine festivals such as ‘Grape Escapade’ while you are in Goa.

Every year, the Santhal colony of Purulia becomes enthusiastic to welcome the season of spring with this festival. In the middle of April or May, the Santhals of Purulia, Jhargram, and Birbhum districts celebrate this festival. ‘Baha’ means flower in the language of Mundas and Santhals. This is why it is also called the festival of flowers. During Falgun month, one can see a variety of flowers like the bright red Simul, Palash, etc. which fills the minds of Santhals with excitement and joy.

The festival is celebrated in a grand manner for three days. On the first day, that is, Unam, the Santhals clean their houses and also the temples of Gods and Goddesses. The Baha festival starts from the next day itself. On this day, the naikey or the priest performs a ritual of worshipping the local Gods such as “Jaher Ara”. In order to please the Gods, cocks are sacrificed. The Shendra or hunting festivals take place on the last day.

The traditional dance of Santhal men and women attired in white clothes and red Simul in their hair is a must-watch. They dance to the beats of Madal drums. Then the local drink Hadiya will be presented to the guests, and thereafter, the locals and visitors engage in dancing together. You can associate with them and take part in the picnic later on.

It is not possible to know the complete history of this festival. It is celebrated with much splendour and grandeur in the last week of April (Chaitra) every year in a few places of West Bengal such as Kalna. This festival which continues till the end of the Bengali year is devoted to the worship of deities such as Shiva, Neel, and Dharmathakur.

On the fifth day of the festival, the worshippers perform the marriages of Shiva with Neelaboti and Dharmathakur with Kamakhya. The sannyasis becomes the bridegroom’s party or the barjatri. Dressed as different deities, the devotees of Shiva present small skits or acts. This is the main attraction of the festival. If you are lucky enough, you can also get to witness a risky game involving fire by the devotees of Shiva. The dance with live burning rods in their hands is certainly an unbelievable sight.

Commemorating the birth anniversary of Guru Padmasambhava, this festival continues for two days. The Hemis monastery then gets filled with joy and enthusiasm. The festivities begin at the break of dawn itself. The image of the Guru is worshipped and then the lamas start their dance with the accompaniment of dhol and other instruments.

The main attraction of the festival is the Cham and Devil dances that the Lamas present in colourful brocade clothes and unique masks on their faces. The Cham dance is a symbol of the good over bad. After the dance concludes, chang, a fermented liquor in native bamboo, is served to everyone present. A fair is also organized where different handicrafts and souvenirs of Leh-Ladakh are sold.

The canoes designed for this occasion are made of a certain kind of wood named Pallyoram. The name comes from the long (100 foot) snake-like designs of the canoes. According to a legend, the designer of this snake boat is Lord Krishna himself. Every year in the months of August and September, the Aranmula Uthrattadi Vallamkali or the snake boat race is held in the city of Aranmula in Kerala. The festival is dedicated to the deity of the Aranmula temple of Lord Parthasarathi. The festival continues for two days.

The sight of the rows of colourful and beautifully decorated boats floating in the Pampa river cannot be described in words. With umbrellas covering their heads, the participants row their boats while singing Vanchipattu (Kerala’s famous boatsong).

This is different from all other fairs. In reality, this is a marriage fair! Every year the festival falls in the months of August and September. The fair is held in the Trinetreshwar Mahadev Temple in the village of Tarnetar which is located in the Surendranagar district of Gujarat. It is based on Draupadi’s swayamvar in Mahabharata. Several young men and women of the local Rabadi race gather in the fair. You can guess the unmarried women from the red zimi (a kind of dress) that they wear. These modern versions of Draupadi come to the fair in search of their would-be husbands.

Not only swayamvar but also the performance of different traditional dances, bullock-carts races, and handicrafts exhibitions are arranged here. The distinctive attraction of this fair is a soothing local dance performance named ‘Rasa’ or ‘Rasadas’. Nearly 200 ladies with sticks in their hands dance in circles to the beats of drums. Another attractive feature is the colourful chatris or umbrellas made out of black cloth and has lots of metalwork in them. The umbrellas also have embroidery designs of the images of Ganesha, Shesh Nag, and Amba Devi. Many umbrella men roam around here and there while singing ‘Doha’ with these chatris above their heads.

This festival is celebrated every year from 1st-10th December in the heritage village Kisama situated in the capital of Nagaland, Kohima. It is known as the “festival of festivals” since it continues for 10 days with a lot of pomp and enthusiasm.

You should definitely have a look at the exhibition of small wooden houses or Morang. Other than this, various unique competitions are organized here such as Naga Chilli Eating Competition and Stilt Bamboo Walk Race. There are opportunities for heritage village walks also. You can get to observe famous villages such as Khonoma as well as the simple lifestyle of Naga races very closely.

Read Also: Holi Festival – The Carnival Of Colors And Here’s How It Can Be Enjoyed.

Psychology has always left us transfixed with its revelations. Until introduced to this science, who'd have ever thought that the color of your favorite...
Read more

Egyptian Paintings Egyptians are well known for their phenomenal architectural inventions, artwork and their beliefs!The Afterlife was the main belief of this civilization which made...
Read more

You Won’t Believe That This Woman Was The Real Bloody Mary!

Real Bloody Mary No one can forget those days in high school where the horrifying tales about the apparition of the Bloody Mary would make...
Read more

Sex chat with strangers can be an exciting and interesting experience. It's a great way to explore your fantasies, broaden your knowledge, and learn...
Read more
Previous article
What Is So ‘Godly’ About God Particle?
Next article
4 Benefits of choosing Journalism

All You Need To Know About This Human Library