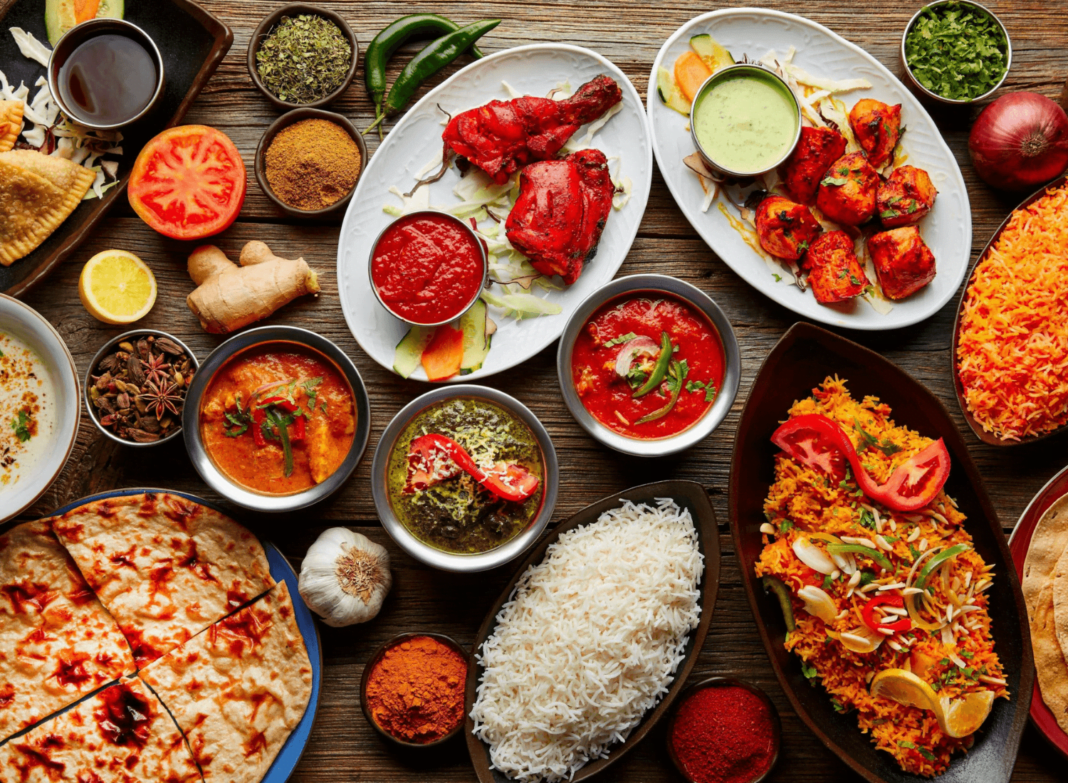 “Nothing draws people together like food,” as the saying goes, and this is especially true in a country with a population of almost 1.36 billion people. Indians may be split between north, east, west, and south and between diverse cultures, languages, and customs, but there is, and always will be, one thing that unites them and the whole country: their everlasting passion for food.

All of this translates to a variety of delicious, wonderful, and warming foods available around the country.

Here is a list of 29 Famous Indian Dishes from 29 States of India.

The term Rogan Josh translates to “red hot” which means you can rely on it to help you get through the chilly weather in this “Paradise on earth”. It’s mutton or lamb (red meat) served in a fiery Kashmiri chili pepper sauce, influenced by Persian cuisine and brought to the nation by the Mughals.

Although there are more than 20 types of fish curries found in India, Goa’s Goan fish curry is the one to rule them all. Prepared with coconut milk, tamarind, and curry spices, this curry is the prize for those who finally succeed in making their Goa trip happen!

Khichdi is one of India’s staple foods, which means there are several versions available around the country. This classic Haryanvi dish is made with Bajra (millet) and Moong daal, as well as a traditional spice blend, and is ideal for a light and tasty supper.

Vada Pav, also spelled Wada Pao is a famous street food snack, native to the state of Maharashtra. Vada Pav is easily one of the simple dishes to prepare on the list as it is a humble yet instant combination of deep-fried Batata vada (potato fritter) stuffed between two slices of pav (bread).

Appam, also known as Palappam is a type of pancake or lacy soft hoppers made with a batter of coconut milk, raw rice, dry yeast, and a little bit of sugar. This popular morning dish from “God’s own country” comes with a vegetable stew prepared with potatoes, carrots, onions, peas, beans, and ginger.

As Sikkim contains the highest amount of ethnic Nepali majority, Phagsapha is one of the main dishes of Nepali origin in the state. Made by stewing strips of pork in radish and chilies, this famous dish is consumed mainly in the months of summer.

Dhuska (also known as Dhooska or Dhushka) is a street food item of Jharkhand, but it is also prepared on the occasions of festivals and celebrations. It is a fried dish made of rice and pulses and served usually with green chutney.

This royal dessert from West Bengal is an all-time favorite of not only the Bengalis but the whole of India too! You don’t need a special occasion to enjoy this modest delicacy, which is made with ingredients like milk, cardamom, lemon juice, and saffron. Each bite will just melt in your mouth.

If you’ve ever been to a Garhwali or Kumaoni wedding or celebration, you know that you won’t return without a box full of Arsa. An integral part of the Pahadi tradition and festive occasions, Arsa is a sweet dish prepared with rice, jaggery, and mustard oil.

Hyderabadi biryani is a type of rice that traces its origin back to the Mughlai cuisine and the kitchen of Nawabs. Prepared with long-grain basmati rice, chicken, and an aromatic blend of spices, this Biryani is in itself a perfection, which makes for one of the most important parts of the Indian culinary experience.

In Odia, Chenna Poda translates to cheesecake! This heavenly goodness of Odisha includes paneer (Indian cheese) and jaggery/sugar, baked traditionally in Sal leaves until the Chenna caramelizes and turns brown.

Although it is a side dish that goes with every other dish in the Mizo cuisine, Bai in itself is a gem. A variety of stew, every seasonal vegetable that is available in the particular season makes its way into this dish, resulting in a lot of tasty varieties found throughout the state.

Cooked in almost all the households and restaurants in the state, Bisi Bele Bath is originally a vegetarian dish made using rice, lentils, vegetables, and a masala (mixture of spices), prepared especially for this dish. Even though its preparation takes a long time, it in itself is a complete hearty meal.

As if we needed another proof of Indians’ love for rice, here is another famous rice dish! Jadoh is a northeastern version of Pulao or Biryani made with red rice and pork. While the modern version of this dish today sometimes includes chicken, fish, or just vegetables, traditionally prepared jadoh was cooked in pork blood!

Talking about the cuisine of Bihar would be incomplete without mentioning Litti Chokha. Due to their similarities, a lot of people confuse this traditional Bihari dish with Rajasthani, Daal baati. Litti is stuffed whole wheat dough balls, with the filling of sattu (powdered roasted gram), and the chokha for this is made using brinjals, tomatoes, and potatoes.

Trust us when we say that it was a strong fight between dhokla and khandvi, but this delectable snack won its way to our hearts and this list! Also known as Patuli, Dahivadi, or Suralichi Vadi this authentic Gujarati snack is made using a mixture of gram flour and buttermilk.

Neither the Assamese cuisine nor any meal in this beautiful Indian state is complete without its signature dish- Khar. To put it simply, khar is an alkaline extract, extracted from the peels of burnt, dried bananas, which is then used to make traditional khar dal with papayas.

Chattisgarh is known as the rice bowl of India, so without a doubt, its most famous dish is a rice-based regional delicacy, Muthia. Not to confuse it with a Gujarati food item with the same name, this dish is made of steamed dumplings made of rice batter and seasoned with spices and coriander.

No mention of south Indian cuisine is complete without, Dosa. Prepared using a fermented batter made of soaked rice and lentils, dosa is a rendition of Indian crepe or pancake. They are usually served with Sambhar (a lentil-based curry) with the side of delicious coconut chutney. Numerous varieties of this south Indian favorite are found throughout India.

Hailing from this serene northeastern state, Eromba or Iromba is a type of chutney consisting of local dry fermented fish called “Ngari or Ootonga“ with mashed vegetables. Like most northeastern dishes, it is prepared in little to no oil and eaten with rice or rotis for either lunch or dinner.

Available primarily in Madhya Pradesh’s Indore, Bhutte Ka Kees translates to grated corn. It is a nutritious street snack made by simply cooking grated corn in skimmed milk with coconut and aromatic spices. Bhutte ka Kees makes for a unique and fulfilling winter snack, straight from the “Heart of India”.

Naga cuisine is best known for its simplicity from one of the most unexplored regions of northeast India. An integral part of a Naga household, both bamboo, and fish come together to prepare this regional delicacy. To prepare this dish, bamboo tubes are filled with fish sprinkled with spices and allowed to be smoked over a fire.

A complete meal in itself, this semi-sweet thali comes straight from the land of vibrant colors and palaces. This three-in-one treat includes, a spicy and flavourful Daal(lentil), baked or fried wheat dumplings known as Baati and semi-sweet Churma made of wheat flour topped with loads of ghee!

Any list of Indian food is incomplete without a curry, and for that, this appetizing curry comes straight from the beautiful hills of Himachal Pradesh. This easy-to-make dish is prepared by cooking chickpeas in a yogurt-based gravy mixed with spices and served with a bowl of warm rice for a comforting meal.

Mui Borok is the traditional cuisine of Tripura, which includes Berma, a local dried and fermented fish cooked in a blend of spices with no oil, making this dish extremely healthy and nutritious.

This list of famous Indian delicacies wouldn’t be complete without mentioning this dish from the country’s capital. This tasty combo consists of Chole or Chana i.e. deliciously tangy chickpea curry with Bhatura/Puri, a type of Indian fried bread that has fans all over northern India.

Indians combine a broad range of ingredients and spices to create enticing, flavorful cuisine that may fulfill one’s appetite while also satisfying one’s taste buds. These are fascinated not only by the flavor and aroma of the Indian cuisine offered but also by its looks. Moreover, Some Indian foods may be instantly cooked by anybody, even if they have no prior cooking knowledge. Bon Appetit!

The Facebook security scam has taken a big turn this time, and the users are blaming Mark Zuckerberg for this. it is said that yet...
Read more

By atheist, the only thing that comes to our minds is someone who does not believe in the existence of God. No matter what...
Read more

India is a land of customs, traditions, and beliefs. We follow them anyway because it is in our blood. We often do hear a...
Read more

Your body is an incredibly complex machine. There are still plenty of secrets regarding how some parts work, and research into these things is...
Read more
Previous article
Beer Is Not Just An Alcohol ! Read On To Know Its Superb Uses
Next article
This Indian Is The Father Of The Pentium Chip

Was Anne Frank Betrayed Or Discovered By Chance?