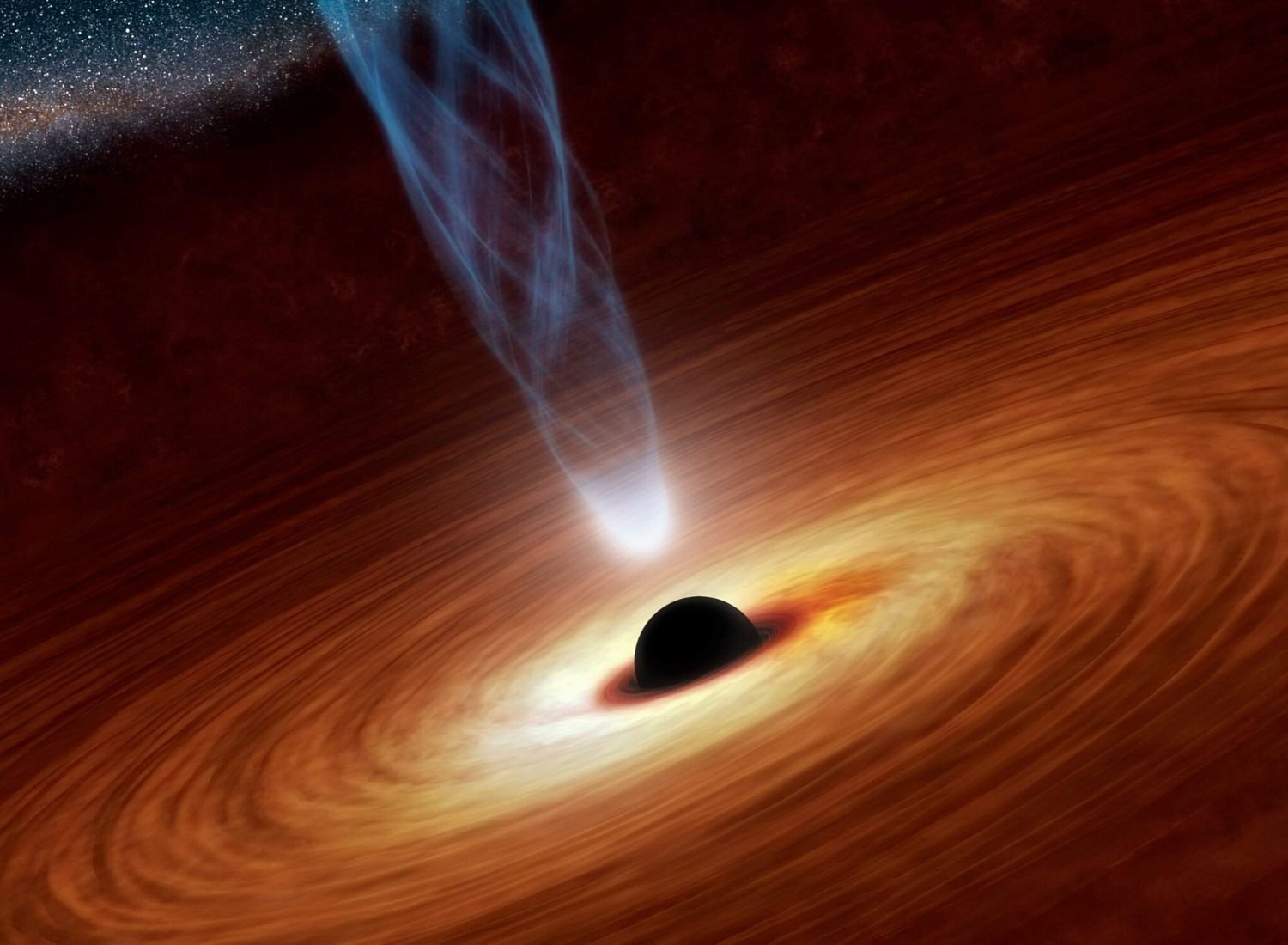 Table of Contents show
What is a black hole?
10 Interesting scientific facts about black holes.
1. You can’t directly see a black hole.
2. There are different types of black holes.
Schwarzchild Black holes
Kerr-Newman Black Holes
Kerr Black Holes
Reissner-Nordstrom Black Holes
3. We would have to shrink the earth to the size approximately with that of a coin to turn it into a black hole.
4. There is a massive black hole at the center of our milky way galaxy.
5. The opposite side of black holes is estimated to be white holes.
6. If a star passes too close to a black hole the star can be torn apart.
7. A spinning black hole has a speed limit.
8. If you were to fall into a black hole, the theory suggests that gravity would stretch you out like spaghetti.
9. Time slows down near the event horizon of the black hole.
10. The Black Hole Era

What is a black hole?

A black hole is a region in spacetime where the gravity is so dense, that nothing, even particles and electromagnetic radiations such as light, can escape from it. The gravity is so strong because the matter has been clasped into a tiny space.

A German physicist and astronomer named Karl Schwarzschild suggested the phenomenon of a black hole. Black holes can be massive, intermediate, and stellar-mass black holes.

We can’t see a black hole through our naked eyes or through any telescope. This is because a black hole does not illuminate any light i.e. light cannot escape the black hole’s gravity.

The event horizon marks the limit of a gravitational field of a black hole so strong that any known object in the universe, including a photon of light, would need to attain an escape velocity greater than the speed of light to overcome the pull of the gravitational field. As the speed of light marks the upper-speed limit in this universe according to General Relativity, light cannot achieve the required escape velocity.

2. There are different types of black holes.

The simplest kind of black hole is a Schwarzschild black hole, which is a black hole with mass, but with no electric charge, and no spin.

These are the types with mass, electric charge as well as spin. The Kerr–Newman metric explains the geometry of spacetime for a rotating charged black hole with mass M, charge Q, and angular momentum J.

Kerr black holes are the ones with mass and spin but no electric charge. The Kerr metric or Kerr geometry describes the geometry of empty spacetime around a rotating uncharged axially-symmetric black hole with a quasi-spherical event horizon.

Reissner-Nordstrom Black Holes are the ones with mass, electric charge but no spin. the Reissner–Nordstrom metric is a static solution to the Einstein-Maxwell field equations. It corresponds to the gravitational field of a charged, non-rotating, spherically symmetric body of mass M.

3. We would have to shrink the earth to the size approximately with that of a coin to turn it into a black hole.

4. There is a massive black hole at the center of our milky way galaxy.

5. The opposite side of black holes is estimated to be white holes.

As, General relativity won’t let the information out and quantum mechanics forbids its deletion. Hence, it is said to be possible that the other side of a black hole could be a white hole.

6. If a star passes too close to a black hole the star can be torn apart.

The star is distorted by the black hole’s tidal force, but otherwise normal, and only loses gas slowly (over many millions of years) onto the black hole. A direct, head-on collision is rare, but if it happens, it would be very violent and the star would be torn apart very quickly. So quickly, that the core of the star probably won’t have time to respond to the changing conditions before it gets torn apart. A fully torn-apart remnant of the star may form a disk around the black hole.

7. A spinning black hole has a speed limit.

Astronomers have detected supermassive black holes spinning at the limits predicted by these theories. At the heart of the galaxy, one black hole NGC 1365, is turning at 84% the speed of light. It has reached the cosmic speed limit; it can’t spin any faster without revealing its singularity.

8. If you were to fall into a black hole, the theory suggests that gravity would stretch you out like spaghetti.

Once you reach the event horizon of a black hole there is no going back, it’s a point of no return. From there, the black hole will start to stretch you long, like spaghetti. This process of matter stretched like spaghetti in dense gravitational fields is called spaghettification.

If you were to fall into a black hole, your feet will be attracted more towards the black hole than your head and hence you will be stretched as the gravity will affect each part of your body differently.

9. Time slows down near the event horizon of the black hole.

The theory of relativity says, the speed of light is constant and everything else is relative. Hence gravity and time are relative too. You may think, at the event horizon, with the gravitational pull, time would go faster, but in reality, time passes by slowly.

In the book, The Five Ages of Universe, authors Fred Adams and Gregory Laughlin, have discussed five eras through which the universe is expected to go through, one of these is the black hole era. The five eras are the primordial Era, the Stelliferous Era, the Degenerate Era, the Black Hole Era, and the Dark Era.

The Black Hole Era is defined as 10^40. In this era, according to the book, the organized matter will remain only in the form of black holes, as all the matter in the universe will start forming black holes.

After 10^100 years, these black holes will evaporate themselves and the universe will enter the Dark Era.

Did You Know About All Rounder Inventor Benjamin Franklin?

Where To Print Your Obituary Programs For A Quick Turnaround?

Obituary programs are just like the funeral program but with a pre-designed version, you can customize it online or by using a 3rd party...
Read more

The Chakra literally means a wheel or a disk in English. The body has energy centers that look like spinning wheels. Hence, they are called chakras.There are...
Read more

One of the most significant factors that can be an indicator of overall health is your diet. What foods do you consume regularly and...
Read more
Previous article
7 Interactive Classroom Activities For College Students
Next article
Can Coffee Really Increase Your Level Of Productivity?