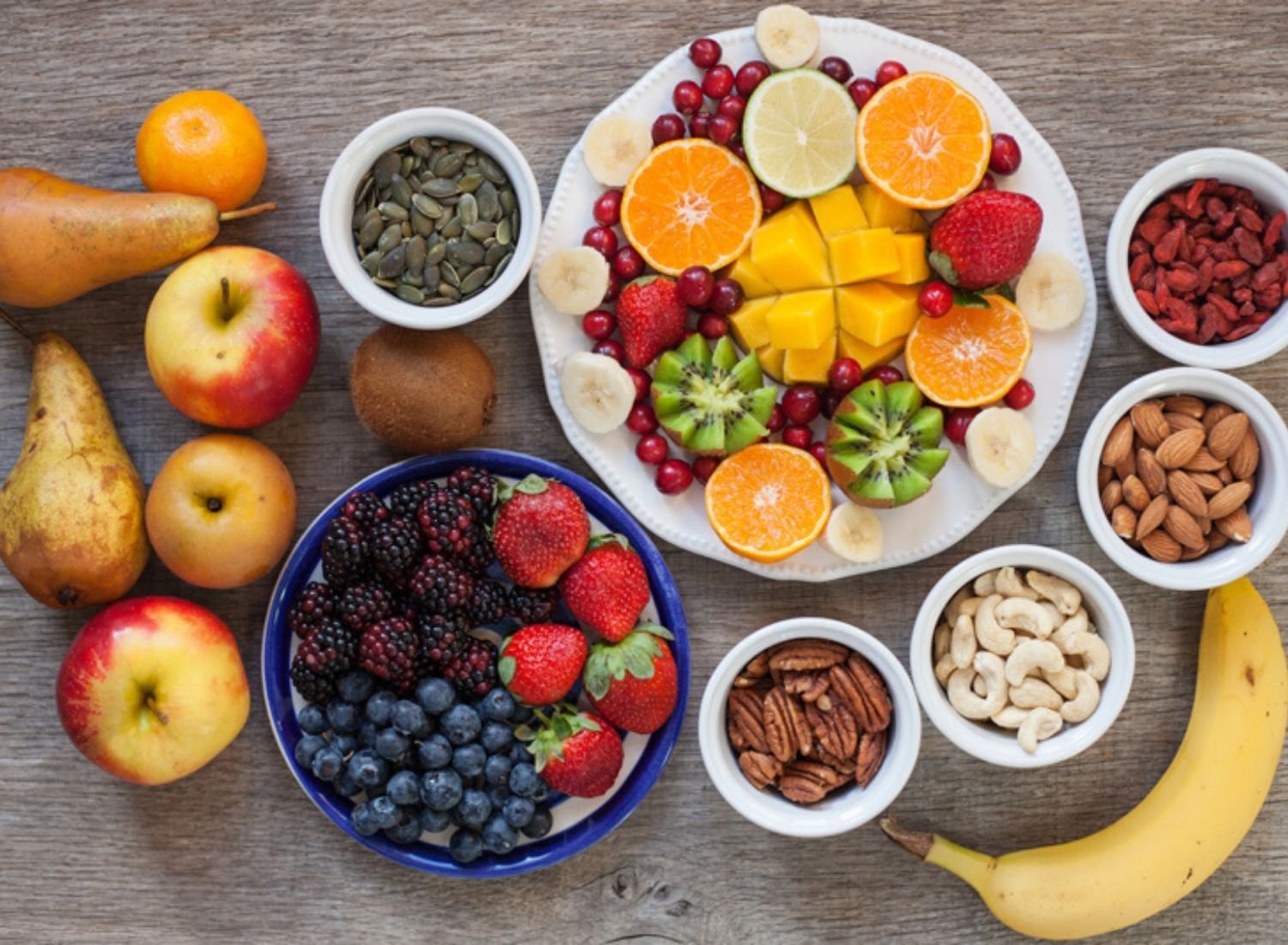 “Health is wealth”, an age-old phrase that has been closely related to eating healthy food and staying fit every day. And when we speak about eating healthy, the first thought that strikes our minds are natural fruits and nuts and vegetables that are enriched with essential vitamins and minerals. But here comes a shocking as well as an overwhelming fact, most of the common healthy fruits and nuts that we eat today such as bananas, oranges, strawberries, and almonds are not entirely natural.

Any organism that has been modified through genetic engineering is called GMO (Genetically Modified Organisms). Although most the fruits and nuts are created as a result of Selective breeding or artificial selection, a process used by humans to develop new organisms with desirable characteristics. Two parents each with some superior characteristics are chosen to breed so that they yield offspring with better and desired traits. This is how more nutritious fruits and vegetables are yielded. Some of those fruits and nuts are discussed.

The most famous citrus fruit enriched in vitamin C is not a natural fruit. Citrons, in fact, were not the ancestors of the orange that we eat today. These were produced from the cousins of citron, called the pomelo and mandarin. The pomelo was a bitter fruit with nutritious properties and mandarin was a sweet fruit, orange in colour that was crossbred to form the contemporary orange. Although not clear, some Indian or Chinese scientists selectively bred these two fruits somewhere around 314 BC to get a new fruit, an ancestor of the modern-day orange, which later through several steps of breeding formed the contemporary orange.

The banana is a hybrid of the wild Musa acuminata and Musa balbisiana banana species. Wild Musa acuminate was fleshy inside with an unpleasant taste whereas Musa balbisiana was pleasant tasting with too many seeds inside. These two, crossbred naturally in the forests of South Asia thousands of years back around 10,000 years ago, to form the ancestor of modern bananas.

Although these ancestors were sterile in nature, so early humans replanted their shoots to cultivate more bananas. Later, they engaged in selective breeding by planting bananas of favourable traits to produce contemporary bananas.

The true ancestors of the modern watermelon are indigenous to northeastern Africa: Citrullus lanatus var. colocynthoides, known as gurum in Sudan and gurma in Egypt. The wild watermelon variety was round in shape, bitter or bland tasting, and unappetizing, with a very light reddish hue and lots of seeds. It dates back to the Egyptian civilization thousands of years back.

But unlike other fruits, this could be eaten for weeks and even a month if kept in cool condition. Soon, Egyptians thought of giving this fruit a taste and hence they started selectively breeding watermelons that gave rise to the oblong shape of the watermelons. Such paintings are found in Egyptian pyramids. In subsequent years, the watermelon took the familiar reddish hue because the gene for the colour red was paired with the gene that determines sweetness (sugar content). As watermelons were bred to become sweeter, their interior became more reddish.

Wild strawberries are native to the Alps mountains and are well known since the prehistoric era. They were typically small and didn’t have a long shelf life. The large strawberry is a variety of strawberries that comes by crossbreeding two American species, Fragaria virginiana and Fragaria chiloensis that were mixed in France. The strawberry is such a fruit that has undergone several selective breeding throughout the world mainly in Europe, and America to form modern strawberries throughout the course of time so much so that now they don’t have many similarities with the native species.

Though the most common strawberries are the crossbred result between Fragaria and Ananassa. One of which has a better flavour and aroma and the other has a shorter shelf life. To date, there are a variety of types of strawberries grown in different regions around the world.

Mangoes are age-old and date back thousands of years back even before the Vedic age. It has given rise to 1500 amazing varieties among which 1000 are for commercial purposes in India alone. Each of those varieties has a unique taste and flavour and many are the result of selective breeding between two types of mangoes. This is predominantly a Southern Asia fruit, that later travelled throughout the world.

Alphonso was a Portuguese, who after conquering southern India decided to cultivate the most expensive mango in the world – Alphonso Mango. Some hybrid varieties of mango namely – Mallika and Amrapali, a cross between Neelam and Dashehari, Arka Aruna and Arka Puneet, and a cross between Alphonso and Bangapalli are some of the notable varieties in India.

Grapes are one of the oldest cultivated plants. They are classified as true berries because the fruit wall or pericarp is fleshy all the way through. The cultivation of grapes dates back to 5000 years in Egypt and they were highly developed and cultivated by Romans and Greek. Today there are 200 varieties of grapes. The modern grapes have been derived from two main species – Vitis vinifera (a tight skin grapefruit with wine-like flavour) and Vitis labrusca (a slip skin grapefruit with concord the taste) the latter is an American variety have has a fleshy watery pulp mainly used for making jellies, juices and preserves.

Corn, although considered a grain, can also be called a fruit. Perhaps the most remarkable example of selective breeding is the North American sweet corn, which was bred from a barely edible teosinte plant. Natural corn was first cultivated in 7000 BC and was dry like a raw potato. Today, corn is 1000 times larger than it originally was 9000 years back and also much easier to peel and eat. The sugar content now is 6.6% from 1.9% in natural corn. This drastic change mainly occurred in the 15th century when Europeans started cultivating it.

Peaches were small, cherry-like fruits with little flesh. They were first cultivated around 2000 BC by the Chinese, although they have domesticated it since the Neolithic period. It is said that original peaches had an earthy and salty taste. Biologists have described their flavour as “like a lentil”. Modern-day peaches are actually hybrids produced by crossbreeding Prunus species. Years of selective breeding have finally produced peaches that are 64 times larger, 27% juicier, and 4% sweeter.

The modern peanut is a hybrid of Arachis duranensis from Andean valleys between Bolivia and Argentina and Arachis ipaensis from Bolivia. Both of these plants were miles apart so there is no scope of natural cross-breeding via pollination. Therefore, the only option is by human intervention.

Researches say that people from Andean valleys settled in Bolivia 10,000 years back. During that time they might have carried Arachis duranensis and crossbred it with Arachis ipaensis in Bolivia. Though this cross-breeding was not directly done by humans. Bees induced pollination between these two plants and hence the ancestor of contemporary peanuts was produced.

Wild almonds of the primitive period were actually poisonous. The almond was a man-made hybrid of an utterly bitter variety, which when consumed in a considerable amount could be proven deadly. It is still cloudy to scientists how our ancestors converted a poisonous nut into one of the most nutritious healthy sweet meals.

Although the history of the ancestor of modern almonds is unclear, scientists believe that Amygdalus fenzliana (Fritsch) Lipsky was the ancestor because the tree, seeds, and fruit resemble modern almonds. It was found in Armenia and Azerbaijan, where the contemporary almond is believed to have been selectively bred by humans.

So, the next time someone states that genetically modified vegetables, fruits and nuts are not healthy to consume, you can state with conviction that we already are.

A woman is capable of helping herself in any adversity. But the mentality of some people today is still forcing society to become a bit...
Read more

Urine As Medicine A Lot of F.R.I.E.N.D.S. series fan would have a flashback when I say that urinating on a jellyfish sting helps to heal...
Read more

Sago, also known as Tapioca Pearls (Hindi: Sabudana), is a popular source of carbs in most parts of the world. It is a kind...
Read more

Planning a wedding is an exciting time. You’ve probably been excitedly chatting about an abundance of ideas you’ve both has since the engagement, and...
Read more
Previous article
Green Borneo Kratom: Benefits And Recommended Intake
Next article
4 Easy Steps To Grow Weed At Home

Before You Get a Tattoo, Know About Its Ink Ingredients!

Did You Know About The Sad Reality Of Princess Diana?