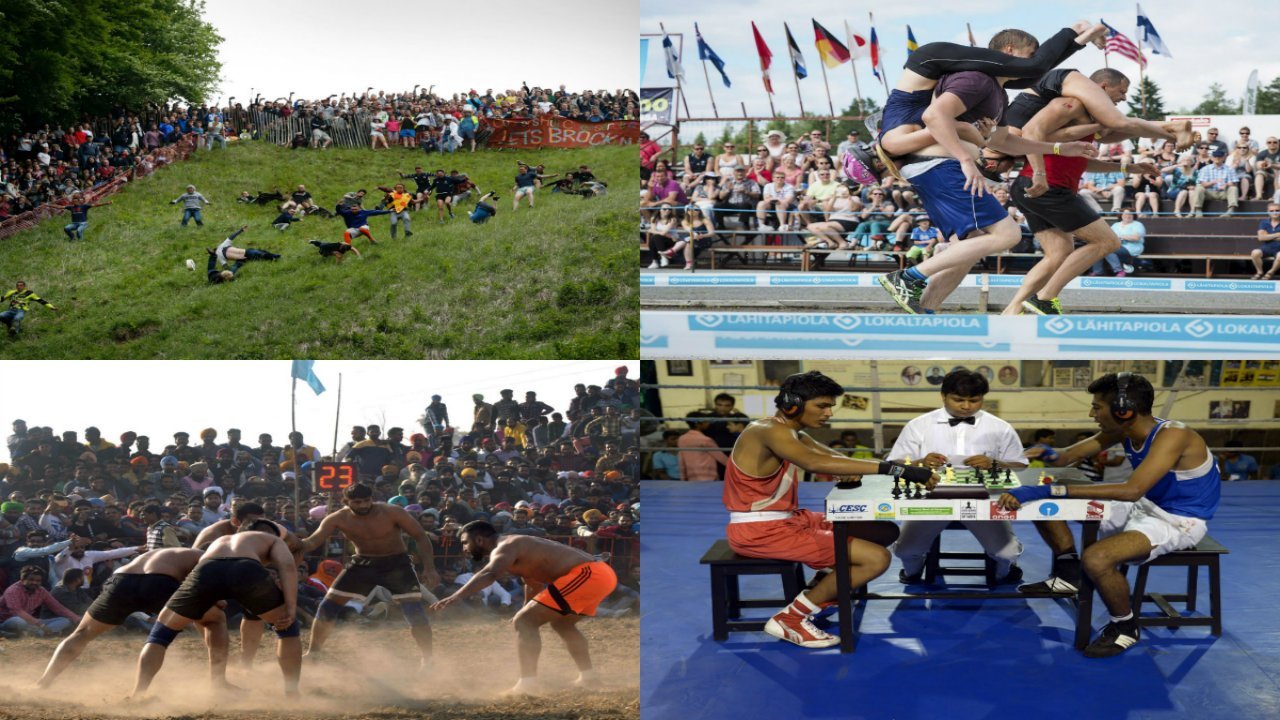 Soccer, basketball, cricket, rugby, swimming etc are some of the sports which everyone has heard of but What you may not know is that there are an incredible amount of sports being played around the world that are completely unrecognizable like Extreme Ironing or Chess Boxing. Curious to know more? Here is the list of some of the weirdest and unusual sports that you’ve never heard of.

The sport was first introduced at Sonkajarvi, Finland, since 1992 and made it’s way to north America in 1999. It is a contest in which male competitors race while each carrying a female teammate on their back, they are not required to be married legally. The objective is to go through the obstacle track in the fastest time while carrying the female teammate on their back. wife carrying world championships are held annually. Several types of carrying are being practised: piggyback, fireman’s carry(over the shoulder) or Estonian style ( the wife hangs upside down with her legs around the male teammate’s shoulder, holding onto his waist). If the man drops his female teammate then five seconds extra is added to their total time. At the annual North American Wife carrying championship, winners receive the traditional prize of the wife’s weight in beer, five times her weight in cash and an entry into World Championship in Finland.

The Cooper’s Hill Cheese-Rolling is an annual event held on the Spring Bank Holiday at Cooper’s Hill, near Gloucester in England. It was Traditionally played by the local village people of Brockworth, Gloucestershire but now people from all over the world take part in it. The Guardian newspaper has called it a ‘world famous event’ with winner from the united states, Australia, New Zealand and Nepal.A large cheese wheel is rolled down a steep hill, and competitors race after it. The first person to reach the bottom of the hill gets to take the cheese wheel home. This sport may not sound dangerous but the steepness of the hill have resulted in many major injuries.

Also known as Octopush, mainly in the United Kingdom. It originated in England in 1954 when Alan Blake, a founder of the newly formed Southsea Sub-Aqua Club, invented the game he called Octopush, as a means of keeping the club’s members interested and active over the cold winter months when open-water diving lost its appeal. First Underwater Hockey World Championship was held in Canada in 1980. Now the sport is played worldwide, where two teams trying to push a puck using a stick across the floor of a swimming pool into the opposing team’s goal. It is quite similar to the game of hockey but is played underwater.

It is a hybrid fighting sport that combines two games: Chess, a cerebral board game and Boxing, a physical sport. Chessboxing was invented by Dutch performance artist Iepe Rubingh. Competitors play 11 alternating rounds of chess and boxing for three minutes each. Chessboxing is popular in Germany, the United Kingdom, India, and Russia.

It is an extreme sport where the participants of this sport call themselves “ironists” and go to remote areas and iron their clothes. According to the Extreme Ironing Bureau, extreme ironing is “the latest danger sport that combines the thrills of an extreme outdoor activity with the satisfaction of a well-pressed shirt”. It has been performed underwater, hanging from cliffs, while skiing or snowboarding and even on top of vehicles.

As the name suggests, Toe wrestling is a sport where two opponents who lock feet and attempt to pin each other’s foot down. The game was invented by four drinkers in Ye Olde Royal Oak Inn in Wetton, Staffordshire in 1974, who was bemoaning the fact that the United Kingdom struggled to produce any world champions. Players play with their bare feet alternating between their left and right feet and play the best of three rounds. There are separate divisions for men and women. Since 1970’s World Toe Wrestling Championship has been ongoing.

Also known as hacking or purring. Originating in England in the early 17th century, the combat sport involves two contestants attempting to kick each other on the shin until one hits the ground. The Shin-Kicking World Championship is part of the Cotswold Olimpick Games, an annual event held on Dover’s Hill, north of the English town Chippen Campden.

It originated and popular in Southeast Asia, It is similar to Volleyball but instead of hands, players use their feet, knees, chest, and head to move the ball around, which is made from softwood. The International SepakTakraw Federation holds competitions where teams from different countries participate.

This game is associated with Easter, where One member of a two-person team tosses an egg to another. If the egg does not break, they step apart and the toss is repeated. The contest continues until one egg is left unbroken.

Since 1933, the farming fraternity of Punjab has been hosting the Kila Raipur Sports Festival, Desi Olympics or Rural Olympics. It is a 3-day event, Acrobatics on horseback, motorbike stunts, pulling vehicles with the hair, racing bullock carts, withstanding an onslaught by farm machinery and lifting bicycles with the teeth are some of the games played in this event.

It originated in the United States since 1920’s. It involves dogs that are trained to surf on surfboards, bodyboards, skimboards, windsurf boards or to bodysurf. Many competitions and exhibition have been held in the coastal areas of the Unites States that feature surfing dogs.

It has been inspired by a fictional game of the same name invented by author J. K. Rowling, which is featured in the Harry Potter series. Fans inspired by the idea of Quidditch so much that now it has become a real sport played internationally. There are two teams of seven players each mounted on broomsticks played on a hockey rink-sized pitch. It borrows elements from rugby, dodgeball, and tag. The game is also referred as muggle quidditch to distinguish it from the fictional game, which involves magical elements such as flying broomsticks and enchanted balls.

The name that literally translates into ‘Well of Death’.Defying the laws of gravity, participants ride either cars or bikes, trying to outdo each other in speed and thrilling stunts as they race across a barrel-shaped track specially erected for the purpose. It ia an attraction at rustic fairs and exhibitions.

This sport began in South Australia in the small fishing community of Port Lincoln. It was inspired by the local fishermen who would toss fish onto their trucks with force and started being used as a way to spice up a local festival. The person who manages to throw a 20-pound fish the furthest emerge as the winner. Nowadays a rubber fish is being used by the participants.

This marathon began as a way to settle a pub argument in 1979 when Welsh locals Gordon Green and Glyn Hones wondered who would win a marathon – a horse or a man. Since then,an annual 22-mile (35.4 km) marathon is held in Welsh Town, Wales with both men and horses running. Men won on 2 occasions otherwise mostly horses emerge as winners, if a human wins, they are eligible to win a $40,000 cash prize.

Since 1996, it is being held in Dublin, Georgia every summer. This athletic event involves unique sports such as toilet seat tossing, seed spitting, mud belly flops, armpit serenades and dumpster diving.

In Kenya, there is a race called “To Hell’s Gate on a Wheelbarrow”, It has been named after a national park that holds the 5-kilometer (3.1-mile) race course. Funds raised from this event is used for the conservation efforts for the park.

It is a race which is around half a mile long, and participants decorate their pumpkins in a colorful way. The most popular giant pumpkin race is held annually on Nova Scotia’s Lake Pesaquid.

It is a traditional game of Mizoram, Where Two players carry around wooden rod within a play area measuring about 15-18 feet, with each one aiming to push the other one out. There are 3-4 rounds of 60 seconds each, were letting the rod touch the ground can get you disqualified.

As the name suggests, it is nothing but a hockey on unicycles. Each team consists of 5 players who are required to have both feet on their unicycle at all times.

Worm charming is a sport in which participants attempt to lure as many earthworms out of the ground as possible within a pre-defined time frame. Many techniques can be used however the most simple and common technique is to simply tap the ground rhythmically until the worms come out.

It is also known as ‘radball’. This sport is essentially a game of soccer played with bicycles, where you’re not allowed to use any part of your body, and must only touch the ball with your bicycle which lack brakes. The ball is controlled by the bike and the head, except when defending the goal. The sport was introduced in 1893 by a German-American, Nicholas Edward Kaufmann. Its first world championships were in 1929. It is popular in Austria, Belgium, the Czech Republic, Denmark, France, Germany, Japan, Russia, and Switzerland.

Sikhs developed gatka as a martial art form to be used in self-defense when Mughals invaded India. With actions performed to the accompaniment of drums and chanting of the holy verses, It draws its name from the wooden sticks used for sparring. Two competing participants attack each other with wooden staves, sometimes a shield is also used.
Turns out, mainstream sports are so passe when it comes to the world of competitive extreme ironing and chess boxing. These are some of the wackiest sports played in the world.