The Mystery Behind The Crooked Forest – 4 Proposed Explanations 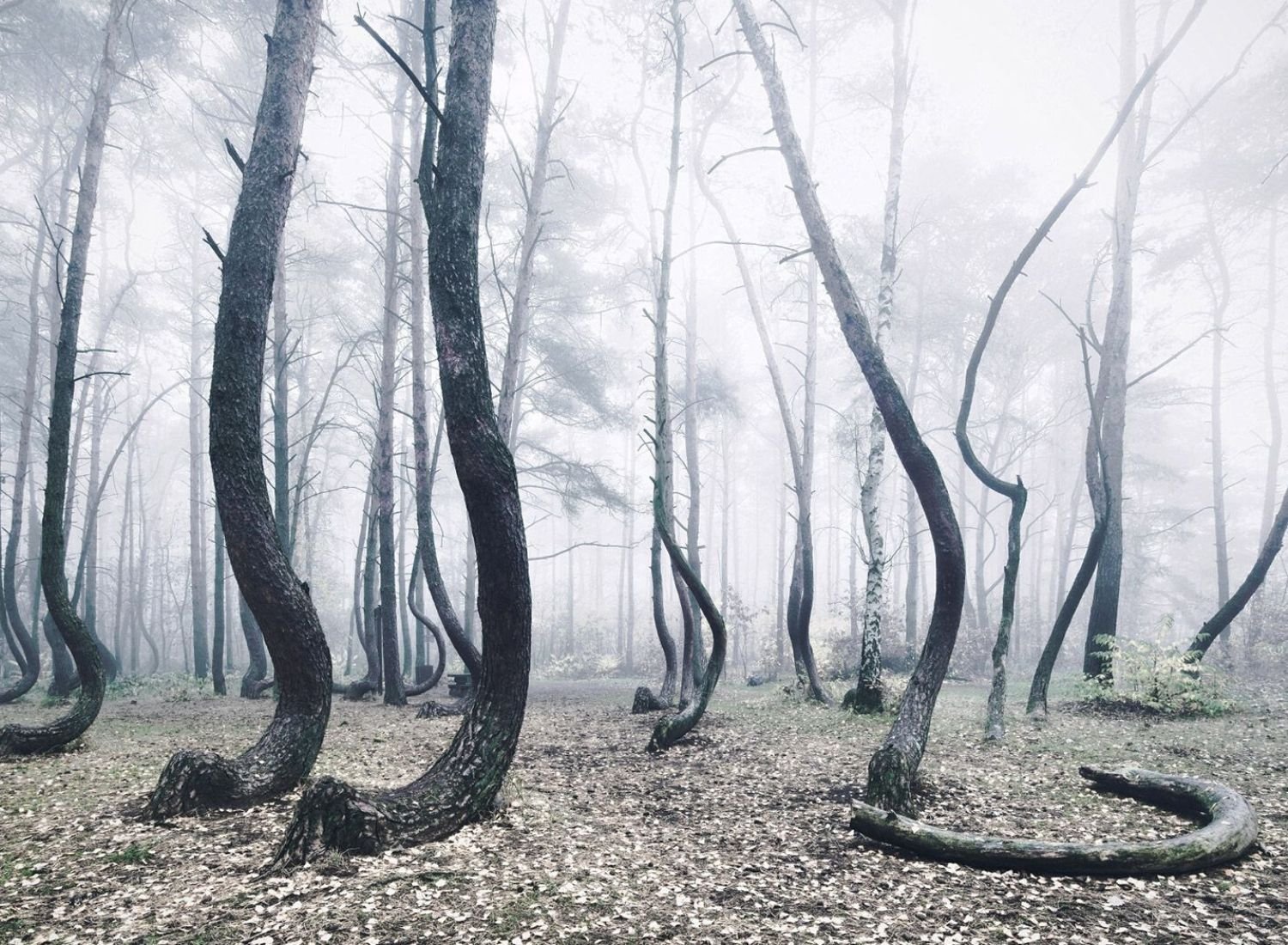 How should an ordinary pine forest full of pine trees look like? Of course, by the laws of nature, they shouldn’t be crooked and must stand upright with straight posture reaching out for the skies draped in spiny leaves. But when we speak of the mighty nature, one thing you and I should never forget is that nature creates and violates her own rules for the sake of survival creating something even more mystifying. Or is it seldom humans who provoke her into bending her own laws? Whatever it might be, even though she bends, she never fails to stand upright again. Here, we are speaking about the uncanny Crooked Forest of Poland.

The Crooked Forest is a grove of 400 J-shaped pine trees located close to the town of Gryfino, West Pomerania, Poland. These eerie looking curved trees are a storehouse of mystery since their origin is unknown. Despite the numerous theories proposed by various scientists, no one has been able to confirm the reason for such an adaptation.

In the Crooked Forest, also known as Krzywy Las, the pine trees indeed grow crookedly with an acute 90 degrees curve right at the base that bends towards North and then upright again. This typically makes them look like J-shaped trees. Surprisingly, the trees surrounding these 400 endemic trees stand straight without any curves, which makes this woodland even more mysterious. It is estimated that these trees were manually planted in the 1930s, during World War II and that they were merely 7-10 years of age when they experienced something bizarre that made all of them take this curve uniformly as an adaptation for surviving in that contemporary environment. But later when everything cleared out, they started growing straight again.

So, what made this crooked forest take this weird curve at a tender age? Was it an unexplainable natural phenomenon? Or was it human intervention? Here are some of the theories put forward by elite scientists who studied the forest.

Some scientists believe that it was extreme gravitational force or an unprecedented gravitational pull at that particular patch of land which made all the trees consistently take a swift bend. But to contradict this statement, they also said that this is highly unlikely since a sudden change in gravitational forces how minute it might be cannot only be effective only on a few square meters of land. This should have affected all the trees surrounding that area too at least for a few kilometers. Moreover, the gravitational pull would have made them move downwards and not sideways. Hence, this theory was not considered a valid explanation.

A slightly more acceptable reason was – heavy snowfall, that may have covered the saplings at a tender age. This would have resulted in flattening of these trees in the crooked forest for an extended period until the snow melted resulting in this unusual bend. The heavy snow might have been followed by a long spring melt that permanently made the trees crooked. But the question again stays unanswered. Why would the heavy snow only affect a selective patch of woodland? If there was a snowfall that resulted in this shape, all the other pine trees surrounding these should have been crooked too.

These trees in the crooked forest were planted a few years before the destructive World War II. Many believe that during the world war, when Poland was attacked, enemy tanks might have paced over the young forest causing them deformity. But still, the question remains unsolved. Why only these trees?

The most acceptable explanation is that these trees in the crooked forest were bent by humans. During those days, bent trees were cultivated to use them as timber. The farmers used to plant trees and manually bent them using various techniques so that they can be used as timber to make finely carved furniture. References of such curved timber have been found in pages of history during this period.

Why is this mystery unsolvable?

Unfortunately, maybe the War of Poland during World War II caused massive destruction of wealth and life. This may be the reason that prevented the farmers to finish the job and thus leaving this peculiar plantation in the hands of nature to let them grow and encrypt the secrets behind their formation scripted in themselves. For many years after the great war, the area besides these woodlands was void of any settlers until the late 1970s when people started to build a new power plant there. Hence, no one can provide any certainty of this odd yet uniform curvature of the crooked forest since there is no witness alive to testify their origin. Although the last explanation seems plausible.

To all the pizzaphiles out there, you cannot disagree on the fact that there's no season for not eating pizza. Craving for pizza is...
Read more

Sex chat with strangers can be an exciting and interesting experience. It's a great way to explore your fantasies, broaden your knowledge, and learn...
Read more
Previous article
7 Mindset Habits That Will Change Your Life
Next article
Keep Calm And Baby On: How To Soothe Your Infant?

7 Amazing Vegetable Painting Ideas For You!

How to be the Ultimate Sports Fan in 2020