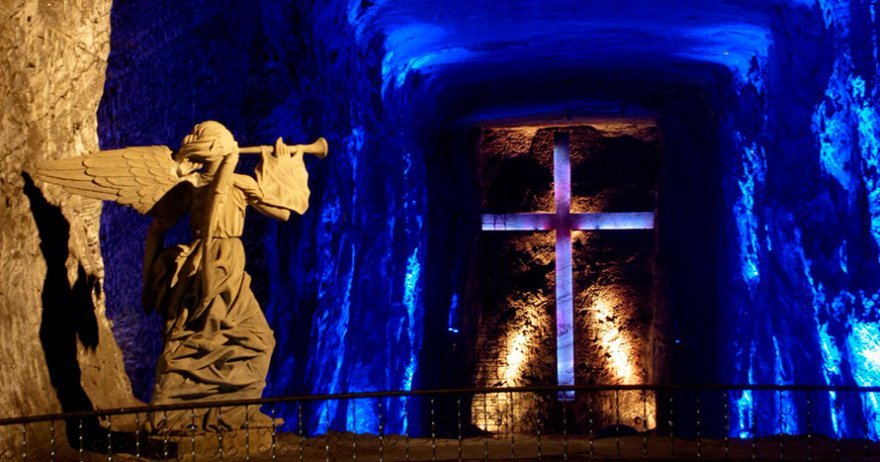 The Salt Cathedral of Zipaquirá is a roman catholic church which has been built 200 meters underground, in the tunnels of a rock salt mountain in Colombia. This church within a salt mine is considered as one of the biggest achievements of the Colombian Architecture. It has also been described as a ‘Jewel of Modern Architecture’.

Cathedral de Sal is built inside the tunnels of a mountain in the town of Zipaquirá, which is an hour’s ride away from the capital city of Colombia.

The construction of the cathedral dates back to 1932 when the salt mine workers who used to extract salt for trading carved a sanctuary for their daily prayers, to pray for their safety. A bigger project started on the cathedral. The cathedral was officially inaugurated in the year 1954. It was dedicated to Our Lady of Rosary, Patron saint of miners. The original cost of building the church amounted to 258 million dollars. It could accommodate up to 8000 people at the most. But due to safety concerns, it was shut down in September 1992.

The construction of the new cathedral took place in 1991 and was inaugurated in December 1995 with a new and safe structure.

Structure of the Cathedral

Furthermore, the chamber is about more than 250 feet deep and around 30 feet wide. The main nave has a chiseled monumental cross. The cross is about 50 feet tall and is illuminated. It also throws a giant shadow of itself on the dome on the cave. Moreover, what’s more, interesting is the fact that it has been carved with 250,000 tons of salt.

The three naves are interconnected, and they represent the birth and death of Jesus. The left nave shows the birth, baptism of Jesus and a waterfall (symbolizing the Jordan River). The right nave showcases the Stations of the Cross icons, also the Rosary chapel, with the Virgin of Rosary Icon.

The Holy Week, the week leading up to Easter is very significant. During busy Sundays the church also offers services. Moreover, Sundays see as good as 3000 people visiting. There is no bishop in the Cathedral. Hence, the cathedral has not yet been officially given the status of Catholicism.

Guides can be hired who take you on an entire tour through the mine. They also explain the significance of each space, history and all details.

The place, although is a Catholic space, doesn’t stop attracting millions of tourists from all over the world.

Read Also: History Of The Holy Grail: The Controversial Cup

How To Reach Your Fitness Goals With These 5 Healthy Drinks?

"A healthy outside starts from a healthy inside."Try out these quick and easy Healthy Drink DIYs for your prolonged fitness goals. 1. Detox water The name...
Read more

One of the most significant factors that can be an indicator of overall health is your diet. What foods do you consume regularly and...
Read more
Previous article
Chinese monorail – Chongqing Metro Monorail Passes Through Residential Building
Next article
Bamboo Products as a replacement for Plastic Products in our lives