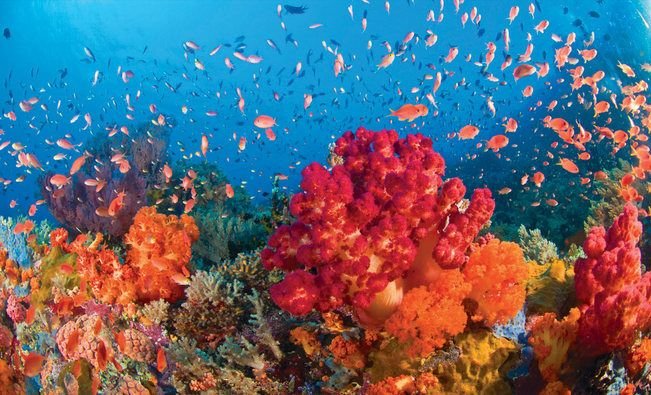 The fast-moving world is experiencing changes on a day to day basis. Inventions, technology, industries are increasing which is not something new that we talk about. Global warming and its after-effects have become such common words that the concept has lost its power of warning, and the term itself has been trivialized. It is the sight around us that is at least powerful enough to show us what we have done to our home. One such incident that has sent a powerful message about the effects of Global warming is the mass bleaching of The Great Barrier Reef. This mass bleaching has not only affected the environment of Australia but has severely affected its fishing economy and tourism. This reef affects not only the ecological chain but also the economic chains that play great importance in Australia. Read more to understand what happened to the beach and the complicated chain structure associated with the same.

Table of Contents show
1 1. What is the Great Barrier Reef?
2 2. Importance and significance of Great Barrier Reef
3 3. What is Bleaching?
4 4. Misconception that Prevails
5 5. Isn’t bleaching bad nevertheless
6 6. Scenario in Oz
7 7. Past incidents
8 8. Steps were taken to combat bleaching
8.1 Also Read About: The Austrian Park That Disappears During Spring!
8.1.1 Image Courtesy

1. What is the Great Barrier Reef?

The Great Barrier Reef in Australia is 1400 mile long coral reef and has the pride of being the world’s largest structure made by living organisms. Corals are animals of the ocean and live in a symbiotic relationship with algae. While the algae provide food for the Coral, the coral, in turn, provides housing for the algae to make the deal mutual.

Apart from being the most massive wonder produced solely by living organisms, the reef plays a significant role in the promotion of Tourism in Australia and is the leading source for many fishers dependent blindly on the fishing economy and its associated activities.

Statistics have shown that the Tourism on the Great Barrier Reef employs over 70,000 people and generates an annual income of $5 Billion (Australian). Apart from tourism, the fishing industry which includes fishing, fish harvesting, pharmaceuticals also relies on this Reef for a chunk of their income.
With a mass bleaching event happening, the fear of the extinction is not just a major threat to the Environment but also to a chunk of the Australian Economy. It will not be wrong of us to interpret that the Reef is the bearer of life and economy in Australia.

Yes, bleaching is also equally dangerous as the coral loses its primary source of food that is provided by the algae. The only way it can gain back the algae is when the water currents cool down again.

Researchers have found that more than 1/3rd of the coral structures in the north and central parts of the reef have been majorly affected by this mass bleaching that occurred. This happened in May. After this event, 60% of the reef is bleached white with several individual corals found dead. Another 20-21% has been found to be covered in brown algae, which is also a sign of poor health condition for these corals. To quote the researchers “If it were a person it would be on life support system.”

This mass bleaching is not something new. This has happened twice in the past. Once in 1998 and other in 2002. In the year 1998, there was a mass bleaching event that affected 50% of the corals, and the water temperatures were the highest during this period. Another 60% of the corals were affected during a similar turn of events in 2002. We can infer that history has repeated itself for the third time and within very close time proximity. This is what sends a chill down the spine for many marine scientists and researchers in Australia.

8. Steps were taken to combat bleaching

A coral reef summit had been staged to combat against this mass bleaching that happens to save the world’s greatest biodiversity from facing a premature death. A Coral Reef Management team has been set up, and funds have been provided to take proper care of the reef, and the sources of these funds range from the Australian government to many international bodies and countries who have shown significant interest in understanding the problem and threat posed to the environment. Countries like Malaysia, Antigua, Honduras, and Papua New Guinea have been selected to be “Coral Reef Leaders.”

The Australian government has also established water quality targets to help keep check of the pollution, fishing and waste dumping that happens in these oceans. But these marks have fallen short of achieving the likely target due to lack of funds to put into action the proposed steps and solutions. But, researchers remain optimistic about the improving health condition of these corals thanks to the impact these efforts have brought about.
In conclusion, it is high time we humans understand the kind of destruction that we pose to the Earth that has provided us with life and opportunities. Considering how we are the only living organisms to have six senses and actively working gray cells, it should be our responsibility to protect and preserve the biodiversity around us, rather than destroying it. To remix the quote of Mahatma Gandhi- “We have not world toured to experience Earth’s from what is left from our previous generation, but have borrowed the experience we owe to our future generation.”

Also Read About: The Austrian Park That Disappears During Spring!