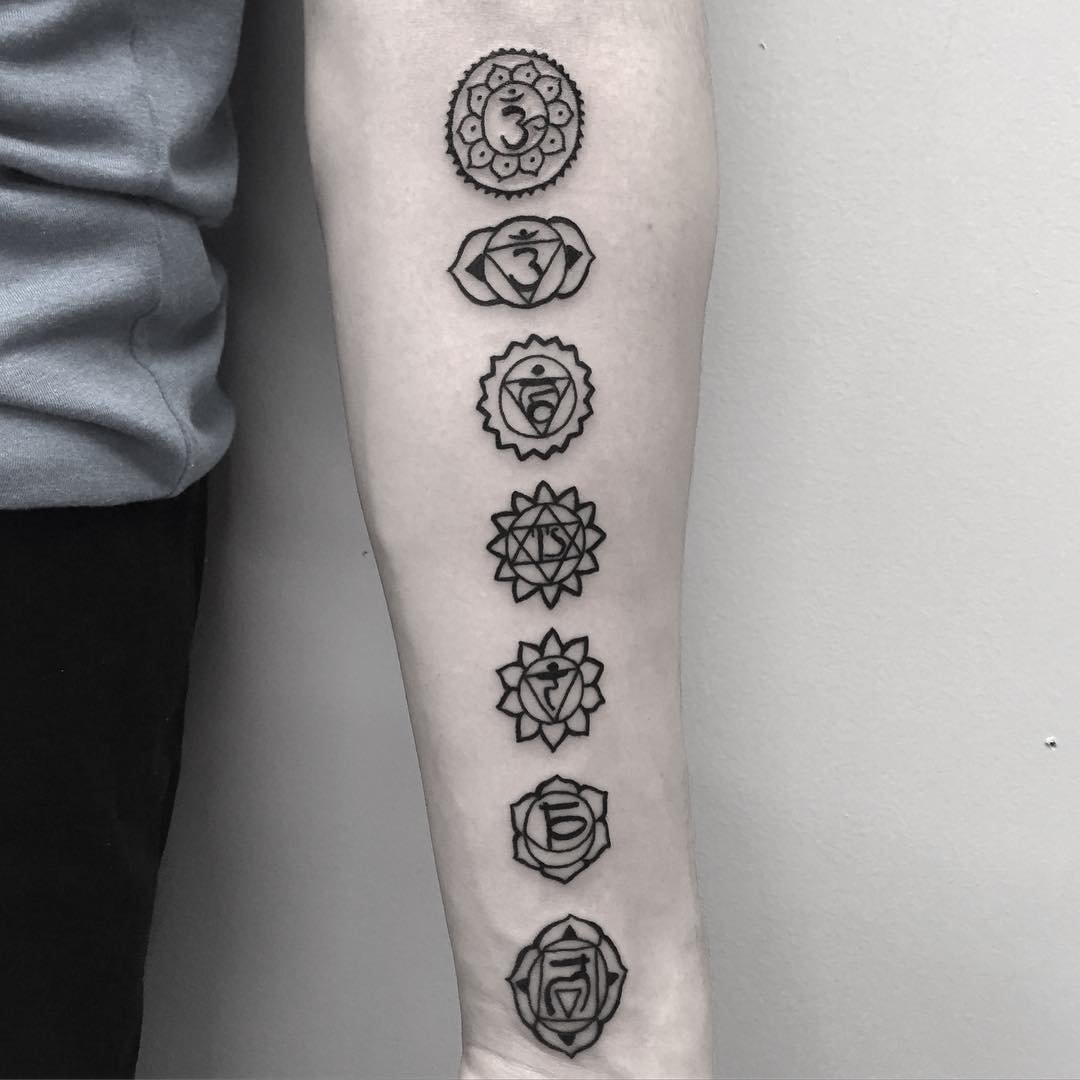 The Chakra literally means a wheel or a disk in English.

The body has energy centers that look like spinning wheels. Hence, they are called chakras.
There are seven main chakras, which align the spine, starting from the base of the spine through to the crown of the head.

To visualize a chakra in the body, imagine a swirling wheel of energy where matter and consciousness meet. This invisible energy, called Prana, is the vital life force, which keeps us vibrant, healthy, and alive.

The aim is to concentrate on chakras and ensure that every one of them is aligned and open, so that energy is free flowing throughout the body, creating physical, mental, and spiritual harmony.

Table of Contents show
Origin of Chakras
Sacral Chakra Tattoos Design: Their Meaning and Significance
Here are some ideas for chakra tattoo designs and the best places to have your chakra symbols:-
image source

According to old Indian texts, known as the Vedas, the chakras originated from India in the period between 1500 and 500 BC.

There is also evidence of the chakras’ existence from this early period in other texts such as the Shandillya Upanishad and Yoga-Shikka Upanishad.

According to several historians and Chakra scholars, the knowledge on the chakras was not in the written form.

And for many years, the Aryan people would pass it down to generations through oral tradition until some new -age authors gave the chakras some symbols and published them.

When the chakras got their symbols, the seven main ones stood out, and so people would draw them in their body for spiritual and physical energy. This tradition has persisted since centuries. It doesn’t only exist in tattooing-the designs are used in henna and art as well.

A chakra tattoo is one of those that a modern tattoo enthusiast will prefer to add to other body markings to give them a deeper meaning and symbolism.

Instead of going for the traditional totems, nowadays people prefer to have the chakra tattoos design because of their spiritual and uplifting and fulfillment.

The only thing that makes the modern day tattoos different is the fact that they have various colors and realistic images. This makes them more appealing than the ancient ones.

The meaning of your chakra tattoo will depend on which of the seven you have because each one of them has a distinct meaning and symbolism.

You can have all the chakras. Or just combine the ones that you want to bring out your particular meaning. The front body represents the conscious part of us, the Individual (ego) Self and the future. While the back body, it represents the unconscious, the Universal (spirit) Self, and the past.

Here are some ideas for chakra tattoo designs and the best places to have your chakra symbols:-

A tattoo is very personal. So, you can have it in any location that you wish. But, just like with other genres, the chakras have specific places where they look fantastic.

Some people prefer to have the chakras as they are and in their original colors. However, some tattoo enthusiasts can spice chakra tattoo designs up a little. To do this, you can combine the chakra with other tattoo symbols to give it more meaning, or draw it in an attractive style.

One of the most common chakra tattoo designs entails having some wings on the sides of the chakras. This not only makes them look extra cute but also adds a spiritual or religious element to the tattoo.

The most common placement area for chakra tattoo designs is the back. This is because it provides you with enough space to draw all seven chakras in their ascending order.

Legs and hands also make perfect placement areas for these totems. And this is only due to the availability of space.

Another favorite design entails drawing a colorful cobra with the chakras within it.

Both the Cobra and the seven chakras have a lot of significance in Indian societies. Therefore, having it can give your tattoo an element of spirituality too.

Some people also have some small symbols wrapped around the wrist to form a distinct design.

The seven primary chakras have been there for centuries. People use them to focus on some attributes of the spirit, mind, and the body.

And this means that they are a perfect body marking for any individual that wants something beautiful and meaningful.

A chakra tattoo is not just an attractive image. It also has spiritual and religious symbolism. That makes it an excellent body marking.

So if you want something that will not only look beautiful on you but also help you focus on the various energies of the mind; then these chakra tattoo designs are a great choice!

We love watching movies! Indians are one of the top moviegoers and consume a lot of Bollywood masala and art movies. There are many Bollywood...
Read more

Know These Bananas Facts Before you Peel them Naked!!

Bananas are loved by many and are grown in the warmer regions of this planet. Aside from being enjoyed fresh, cuisines all over the...
Read more

Delos (Δήλος) is a small rocky island in the centre of the Aegean Sea, about 1.3 square miles (3.4 square km) which are uninhabited...
Read more

Mukbang and ASMR eating has been the ongoing trend of this "new generation," which is usually on the phone screen, scrolling through social media...
Read more
Previous article
Is There A Link Between Creativity And Mental Illness?
Next article
Pastry War Read On To Know More Weird War Stories

Causes And Effects of Nuclear War