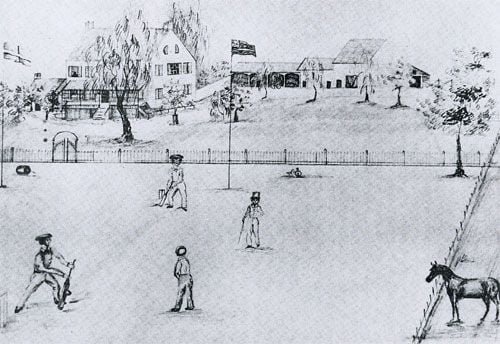 I have always thought about the oldest international rivalry in cricket. Like many of you, I believed it was England against Australia. In conclusion, I was drastically wrong.

Maybe, using the word ‘rivalry’ would be incorrect. After all, cricket is a gentleman’s game that unites nations.The teams of United States (pun not intended) and Canada played the first-ever international cricket match. And no, the venue was not the Lord’s or the Eden Gardens. Rather, it was the Bloomingdale Park in the Kips Bay neighbourhood at 31st  Street and First Avenue, Manhattan. It was a rural area back then.

Even today, there are doubts over the fact that this match was international. Locally it was declared to be a match between the USA and Canada, although the players were from different clubs. The year was 1844 and the England-Australia debacle was still 33 years away.

It all started in August 1840 with a prank (a prank that we all are grateful for). St. George’s Club in New York received an invitation from a Mr. Phillpotts (thank you Mr. Phillpotts, whoever you were). They were to play against the Toronto Cricket Club at a ground near Lake Ontario. While they traveled across New York state on a stagecoach, they crossed Lake Ontario by steamer. Only after reaching, the  Americans were told that there was no such invitation and no Mr. Phillpotts. In addition, the visitors were exhausted and shocked. So, they have not turned away. The Americans were given food, lodging, and rest.

Therefore, a cricket match was organized in haste. It was played on 4th September at Caer Howell, Toronto. The players of the club turned up, along with a decent crowd, in no time. Also, there was a band performance and the match was attended by Sir George Arthur, Governor of Upper Canada. The game was played for a stake of $250 a side. The visitors won comfortably by 10 wickets.

This match set the foundation for the first-ever international cricket match, to be held four years later.

In 1844, an authentic invitation for a match was received by Toronto. The match was publicly declared as “ The United States of America versus the British Empire’s Canadian Province.”

This time the stake was increased to $1000. The match was of two days, 24th and 25th September. The venue was the grounds of St. George’s Club.

The journey was rather tiresome for the Canadians. They had to travel by boat up the St. Lawrence River and across Lake Ontario. Then they took a grueling train journey to New York. There was no pantry in the train. So, they bought food from the intermediate stations. (Wonder how the modern-day cricketers would react to this!)

Canada was the first to bat. The side was bowled out for 82 by the afternoon. It was a respectable score, aided by the butter-fingered Americans. David Wickworth and Freeling were the top scorers with 12 runs. Sam Wright scalped 5 wickets.

Wickworth is considered to be the first dual international. He played his first three games for Canada. Later, he moved to Detroit and played for the USA, in 1946.

Play resumed after an hour-long lunch break. Moreover, by the end of the day, 61 for 9 showed up on the US’ scoreboard.

Rain abandoned play the next day. Sadly (or luckily?) there was no D/L/S method back then. The match resumed on 26th September. The USA could score just 3 more runs before the fall of the last wicket. Wickworth took 4 wickets.

Canada scored 63 runs in their second innings. Wickworth again top scored with 14 runs. Henry Groom and Wright shared the wickets between them. However, the No. 3 batsman for the USA, George Wheatcroft, failed to turn up.

James Turner and John Syne opened the innings for the USA. They had a good start. But, due to the injury as the result of an attack on George Sharpe scores went from 25-0 they went to 36-6. The US innings came to an end with 58-9 and Wheatcroft absent.Hence, they lost by 23 runs.

George Wheatcroft finally turned up, a good 20 minutes after the fall of the 9th wicket. The Americans tried to resume their batting. As Canadians refused to start the match ended.

The two sides met twice in 1845 and Canada won both the times. An interesting thing happened the third time they met.

It was Canada’s 2nd innings. The score was 13-2. John Helliwell hit the ball from Sam Dudson in the air. Helliwell, due to some reason, charged into the bowler, head first (History repeats itself. Right, Zidane?). Knocking on to the ground Dudson caught the ball and held on to it.

Dudson gave Helliwell a good chase after getting up and threw the ball at him. Furthermore, the team handled the situation and made apologies. However, Canada refused to continue with the game. Thus, this rift ensured the two sides never face each other for another 7 years.

Tim Lockley, an expert in American history, said, “ Cricket was by far the biggest sport (in the USA) in this period. Then the Civil War started in 1861, just when it was reaching its peak of popularity. The sport became a victim of that war.”

People are getting more curious about substance abuse treatment, mainly as the field changes. They prefer to know what they should do to prevent...
Read more

History is filled with environmental disasters. Well, the Kill A Sparrow or the Four Pests Campaign is China's self-inflicted disaster. The four pests to...
Read more

The reason behind abusing drugs may vary for many people. For example, some teens start abusing drugs under peer pressure at a very young...
Read more
Previous articleShocking! What Saddam Hussein Decided To Do Just Before The Elections
Next articleAll You Need To Know About Entomophagy – The Practice Of Eating Insects

Everything You Need To Know About a $75 Million Cake .