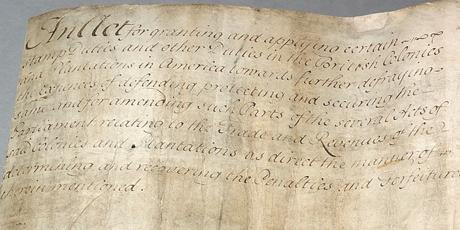 For more than 800 years, the United Kingdom has been printing its laws on vellum. But what is vellum? It is made from calf-skin. Vellum is made by first soaking calf-skin in a lime wash. This causes the hair follicles to expand, making it easier to scrape the fat and the fur from the skin. The scraping is done with a curved bladed knife called a ‘scudder’.

The prepared skin is then washed and stretched onto a wooden frame, and then scraped further with a lunar knife in order to make the thickness even. The skin is the left off to dry, the length of time depends on the ambient temperature, humidity and individual qualities of the skin.

Table of Contents show
Why Vellum?
The Problem With Digital Archiving
The Maintenance Issue

Now that we know what vellum is, the next question is why use it? Why not use paper? Well, the primary reason for this is that vellum is extremely durable. Ordinary paper deteriorates rather quickly. However, this is not the case with vellum. The archives of the UK Parliament contain documents first inscribed in 1497 even!

As a result of using vellum, original copies of documents signed over more than 800 years ago (like the Magna Carta) still exist. But why not keep the records in a digital format? This is because there is a real discomfort with the idea of digital archiving. There is also a lack of belief that digital storage can survive into the future.

There is no real guarantee that the type of digital storage used today will continue 200 years later. So using something like vellum is a lot safer.

Read Also: What In The World? Artifacts That Stumped Experts

The Problem With Digital Archiving

An example of how digital archiving can be problematic can be seen with the BBC Domesday Project. It was conducted between 1984 and 1986. Children from more than 9,000 schools assisted in compiling a statistical survey that consisted of personal thoughts and memories. All this data was stored on laser discs which were considered to be a technology of the future at that time.

However, nearly two decades later, there are virtually no disc players that can read these laser discs. Eventually, the data was made readable but the idea of digital archiving took a hit. Such cases show how fragile digital is. Especially when compared to physical.

Both physical and natural archiving are not without their own problems. If a digital format is neglected, it becomes obsolete. This requires a digital archive to be well created so that migration and active managing of files over time, becomes easier. This improves the chances of readability in the future.

One of the main issues with digital formats is that they are not fundamentally human readable. A specific technology is required to make it understandable. With the rapid advancement of technology, it is very common for things to get outdated. Also, IT systems are far from being infallible. Storing all the data present in the archives as of now, migrating it from one file format to another, backing up copies at regular intervals, it is all rather tedious a task.

When it comes to maintaining paper records, there are matters such as decay, chemical changes, insects and animal damage and the effects of temperature, light, humidity, and dust to consider. Furthermore, there are also issues such as tearing and rubbing.

Read Also: Get To Know All About The Most Powerful Family In The World

Animated shows always have a soft corner in your heart, no matter how old you get. Here we have a curated list, with the...
Read more

How to Turn Your Backyard into a Lovely Oasis?

If you’re one of those people who love spending time outside enjoying the fresh air and the serenity of nature, you’ll definitely want to...
Read more

Students are expected to automate writing assignments due to the variety and purpose of their assignments. It's nearly impossible to not write about something...
Read more
Previous article
The Untold Story Of India’s First Gold Medallist In The Paralympics: Murlikant Petkar
Next article
Diving Into The Secret Of The Skeleton Lake Of India

Most Unusual Ice Cream Flavors You Need To Try This Summer