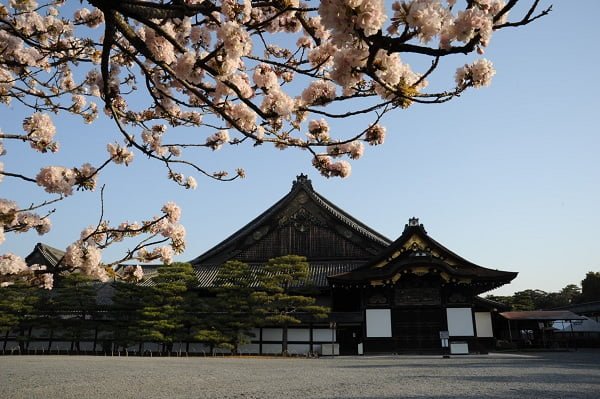 Being a ninja is all about being stealthy and quick on your feet. And being cool. So how did feudal lords and other vital persons protect themselves from ninja assassins? Enter the nightingale floor. As the name suggests, nightingale floor, also known as ‘uguisubari,’ was a type of flooring system designed to make a certain chirping sound when walked upon. The English name of Nightingale refers the to Japanese bush warbler bird or uguisu. So ‘uguisubari’ translates to ‘bush warbler guard watch’. These floors were used in the hallways of some temples and palaces such as the Nijo Castle in Kyoto, Japan.

Table of Contents show
1 The Alarm System Mechanism and Use
2 Nijo Castle, Kyoto
3 The Honmaru and Ninomaru Palaces
3.1 Image Source
4 Leave your vote

The Alarm System Mechanism and Use

Dry boards creak under pressure, as you may very well know. These floors, however, were designed so that the flooring nails rubbed against a jacket or clamp that produced chirping noises. Upside down V-shaped joints move within the boards when pressure is applied.

The purpose of these was a security device, thereby ensuring that none could sneak through the corridors undetected. Not even ninjas!

The Nijo Castle was built in 1603. It served as the Kyoto residence of Tokugawa Ieyasu, the first shogun (commander-in-chief in feudal Japan) of the Edo Period (1603 – 1867). Later on, his grandson completed the castle’s buildings 23 years later and further expanded it by adding a five-story castle keep.

After the Shogunate fell in 1867, the castle was used as an imperial palace. Consequently, it was donated to the city and opened up to the public as a historic site. The palace buildings are probably the best surviving examples of the castle palace architecture of feudal Japan. Nijo Palace was designated a UNESCO world heritage site in 1994.

Read Also: Ever Wondered Why The Leaning Tower Of Pisa Is Leaning?

It has been divided into three areas: the Honmaru (central circle of defense), the Ninomaru (secondary circle of security) and some gardens encircling both. Stone walls and moats surround the entire castle grounds and the Honmaru.

The Honmaru and Ninomaru Palaces

The Honmaru Palace has four parts: living quarters, reception and entertainment rooms, entrance halls and the kitchen area. The different regions are connected via corridors and courtyards. The architectural style is the late Edo period. The castle displays paintings by several famous masters such as Kano Eigaku.

The Ninomaru Palace consists of five separately connected buildings and is built almost entirely of Hinoki cypress. The decorations include gold leaf and elaborate wood carvings with the intention of impressing visitors with the power and wealth of the shoguns. Hence even the sliding doors and walls of each room are decorated with wall paintings by notable artists such as those of the Kano school. One of the most striking features are the nightingale floors in the corridors. Also, it is most interesting to note that the Palace is an excellent example of social control manifested in architectural space. Low ranking visitors were received in the outer regions of the Ninomaru while high-ranking visitors were shown the more subtle inner chambers.

8,359FansLike
2,100FollowersFollow
223FollowersFollow
Previous articleSome Questions About Universe We Don’t Have Answers To! Here’s Why?
Next articleAll Weird Facts About Sneezing You Need To Know