Diving Into The Secret Of The Skeleton Lake Of India 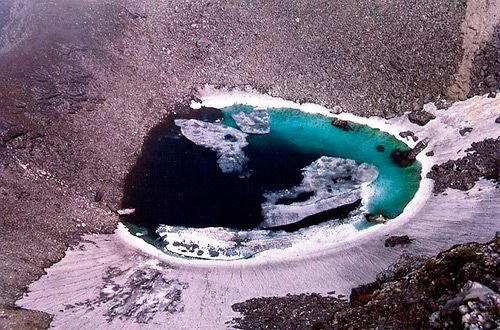 With the onset of spring, one can hear the birds chirping, witness the little animals running about, the snow melting from the tree branches and kissing the ground as beads of pearl, the defrosting of the lake, leaving behind crystal clear water and human skeletons.

Yes, you read that right. This lake in Roopkund, Uttarakhand, India wears such a picturesque hue when the warm season sets in.

Table of Contents show
The Astonishing Discovery
Whose Skeletons Are They?
What Caused This Massacre?
Would You Like To Visit Roopkund?

In 1942, a British patrol stumbled upon a frozen lake full of human skeletons, around 17,000 feet above sea level. As the ice melted, it resembled either a nightmare or a frozen graveyard, only with all the skeletons outside their graves. At first, they were taken to be the remains of Japanese soldiers who died while trying to sneak into India. However, careful examination proved to be otherwise.

Whose Skeletons Are They?

The bones were quite old, dated around 850 AD, and had been well – preserved by the cold. DNA evidence established that these 200 – odd skeletons belonged to two distinct groups – a closely related or family group and a shorter group of locals, perhaps hired as porters or guides. Spears, leather shoes and bamboo staves were found, indicating that the group of people were pilgrims heading through the valley with the help of locals.

What Caused This Massacre?

Initially, an avalanche was deemed to be the reason behind their death. However, experts revealed that all skeletons show only one kind of perimortem wound. This is the trauma that occurred at the time of death.  Also, the weapons used in that era did not make the wounds.

Every person had died in the same way – sharp blows to the head, the weapon being rounded. After much speculation, it is now proposed that the severed head and shoulder injuries were due to a storm of large hailstones (23cm in diameter), the size of a cricket ball. Trapped in a shelter less valley, the people could not escape resulting in this shocking discovery 1,200 years later.

Most of us are stuck at home due to the pandemic, and we have been missing out on a regular schedule. And since we...
Read more

The Giant Telectroscope was a device that helped people see on the either side of Atlantic Ocean or places that are distant via broadband satellite facility....
Read more

5 Items to Always Have With You When Walking At Night

Whether going around the house for a regular check or walking down the street as a form of exercise, you need to be prepared...
Read more

One of the most significant factors that can be an indicator of overall health is your diet. What foods do you consume regularly and...
Read more
Previous article
Why Does The UK Print It’s Laws On Calf Skin?
Next article
10 Inventions that changed the history of the world

These Drinks help you to Detox from Festive Excesses!