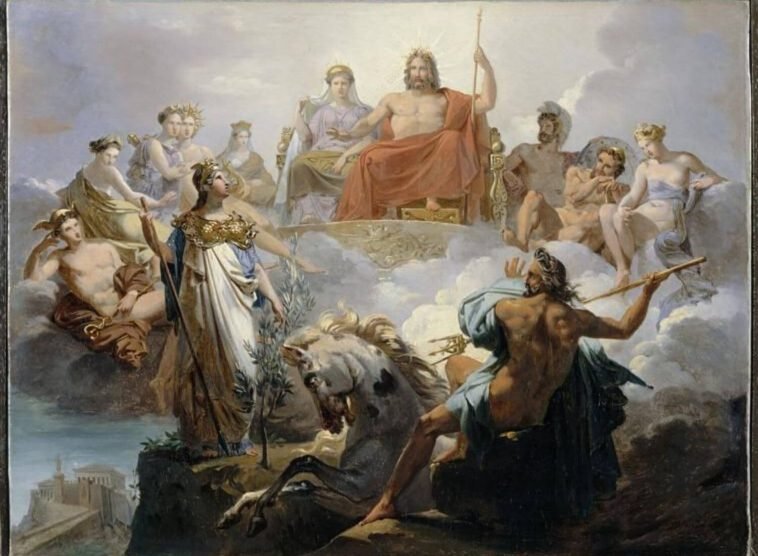 Greek Mythology has no written texts like the Christian Bible or Hindu Vedas. Instead, they are spread through oral communications (especially the stories of The 12 Olympians) from the beginning of the Bronze Age, but soon they were written in literature of the archaic and classical periods. Gods, Goddesses, heroes, and monsters were an important part of the Ancient Greeks’ lives.

The poet Hesiod’s Theogony bought the first written origin story of Greek Mythology. The story of the universe’s journey from nothing Chaos (a primeval void) to everything like God and Goddesses, Gaia (Earth), Ouranos (Sky), Pontos (Sea), and Tartaros (Under World).

There were 3 generations of the Greek gods but only the 12 Olympians were well-spoken off. The previous two generations are not mentioned more. The first generation was Chaos himself, the second is the generation born by Chaos, the third generation is the ones born by Gaia and Uranus: Mnemosyne, Tethys, Theia, Phoebe, Rhea, Themis, Oceanus, Hyperion, Coeus, Cronus, Crius, and Iapetus who were known as The 12 Titans. The fourth-generation known as the Olympians were born from Cronus and Rhea.

The 12 Olympians – The Greek Gods

According to Greek Mythology, the pantheon of deities lived on the highest mountain of Greece, Mount Olympus. It is believed that they ruled every aspect of human life and that the Olympian God and Goddesses looked like men and women who could also shapeshift into animals and other things. Nevertheless, many myths revolved around Olympians.

Some say that the Olympians gained supremacy in the ten-year-long war against the Titans, the previous generation of deities. The first generation of Olympus: Zeus, Poseidon, Hera, Demeter, and Hestia were the offsprings of the Cronus and Rhea. All in all, each Olympian God has its symbols.

The Twelve Main Olympians Gods and Goddesses are as follows:

: The King of all Gods (Jupiter, in Roman Mythology). He is a father of many and also the God of weather, law, and fate. His symbols are the thunderbolt, eagle, oak tree, bull, scepter, and scales.

The Queen of Gods and Goddesses of women and marriage. She is the first wife of Zeus. Her symbols are the peacock, cuckoo, and cow.

He is the God of Sea and the brother of Zeus. He married to Nereid, Amphitrite, though he had many lovers like the other Gods. His symbols include horse, bull, dolphin, and trident.

He is the God of travel, hospitality and trade, and Zeus’s messenger. He is the son of Zeus and Nymph Maia. His symbols include caduceus, winged sandals and cap, stork, and the tortoise

She is the Goddess of beauty and love. She is the daughter of Zeus and Oceanid, Dione. Her symbols include the apple, dove, bird, swan, myrtle, and rose.

Apollo is the God of prophecy, music, and poetry, and knowledge. He is the son of Zeus and Leto and also the twin brother of Artemis. Both were born on Delos Island. His symbols are the sun, bow and arrow, lyre, swan.

Ares is the God of war. He is the son of Zeus and Hera, despised by all the gods, except Aphrodite. He carries symbols like the boar, serpent, dog, vulture, spear, and shield.

Artemis is the Goddess of hunting, animals, and childbirth and the daughter of Zeus and Leto. She is the twin of Apollo whose symbols included the moon, horse, deer, hound, she-bear, snake, cypress tree, and bow and arrow.

Athena is the Goddess of wisdom and defense. She is the daughter of Zeus and Oceanid Metis, who was born from Zeus’s head fully-grown with battle armor. Her symbols are the owl and the olive tree.

She is the Goddess of agriculture and grain and the lover of Zeus and Poseidon. Her symbols are poppy, wheat, torch, cornucopia, and pig.

Dionysus is the God of wine, pleasure, and festivity. He is the son of God Zeus and the Princess Semele. His symbols include grapevine, ivy, cup, tiger, panther, leopard, dolphin, goat, and pinecone.

Hephaestus is the God of fire, metalworking, and sculpture. He is the son of Hera and his symbols include fire, anvil, ax, donkey, hammer, tongs, and quail.

The other gods and goddesses

Many others might be considered Olympians like Heracles, who became a resident of Olympus. After his glorification, he married Hebe. The children of Styx: Zelus (Envy), Nike (Victory), Cratos (Power), and Bia (Force), are said to have no house apart from Zeus, and not even a dwelling or path except for where God leads them, but they dwell always with Zeus, according to Hesiod. Others like Muses, the Graces, Iris, Dione, Eileithyia, the Horae, and Ganymede, are also considered as Olympians.