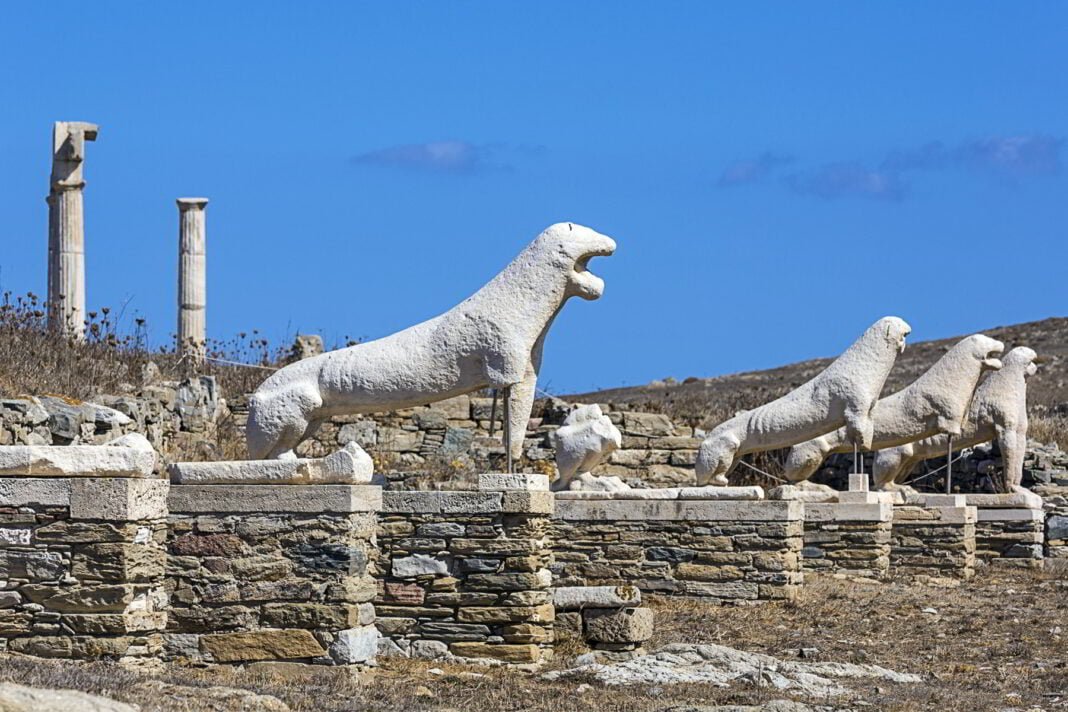 Delos (Δήλος) is a small rocky island in the centre of the Aegean Sea, about 1.3 square miles (3.4 square km) which are uninhabited now. It is important as a mythological, historical and archaeological site of Greece. The island lies to the west and in between Rinía (Rhenea) or Megáli Dhílos (Greater Delos) with Mýkonos Island to its east. It’s also known as Lesser Delo. The artifacts that were found in the excavations are proved to be the most extensive in the Mediterranean and are kept Archaeological museum of Delos and the National Archaeological Museum of Athens.

It was considered the most sacred and famous island of Ancient Greece (Callimachus, 3rd century BC) because of the birth of Apollo (The God of Light) and Artemis (The Goddess of Hunting), the children of Zeus and Leto.

According to Greek mythology, Hera, the first wife of Zeus, was jealous of Leto and didn’t want her to give birth, so being the Queen of gods, she ordered all to turn down Leto. However, Zeus took the help of his brother Poseidon to find a place for Leto to give birth. Poseidon directed Leto to the floating island of Delos, where she gave birth to Apollo and Artemis.

Being the birthplace of Gods, the island has experienced worships, unity, and bloodshed. Births were prohibited on the islands about 2000 or 3000 years ago when it was inhabited. Pregnant women travelled to a nearby island like Rineia to give birth. They celebrated festivals, rituals and also played many athletic games.

The excavated Mycenaen tombs date back to the Bronze Age. in the mid-10th century BCE, Ionians inhabited the island. They turned it into a religious place by the 8th century BCE, attracting many devotees and soon flourished to be a place of trade. Athens interested grew on this island in the 6th century BCE, and they tried to remove the burials of the isle. From c. 540 BCE. It was a centre for importing slaves for menial tasks in temples, shops, and workshops and loading or unloading goods.

In 478 BCE, Delos was chosen as the place and treasury of the Delian League. The Delian treasury was moved to Athens after taking over the island for administration and establishing the League of Islanders, including Delos, in 314 BCE.

Delos became an independent polis for around 150 years, administrated by the hieropoioi after the Chremonidean War (226-229 BCE). Soon the Delian’s independence came to an end when the administration was handed back to Athens in 166 BCE, making it a port for free trade. This brought habitation and increased the population as they supported importing slaves for trade.

After Mithradates Ⅵ’s general, Archelaus, sacked the island in 88 BCE, and after that by pirates in 69 BCE, the situation worsened and brought a permanent decline.

Many excavations revealed ruins that tell of Dellos being a holy sanctuary. The French School at Athens has excavated the island with the Greek Government. Visitors can view the site from Mt Kynthos. It’s said during the summertime, Delos is covered with a sheet of yellow, red, and purple wildflowers with a few pond frogs croaking.

But during summers, the Delos island heats up, leaving hardly any shade of trees; visitors are required to take shelter beside the house walls or their umbrellas.

The islands have Greek gods like Athena, Apollo, Artemis, Hera, Zeus, Hercules, Leto, and Asclepius. There is an 8m high statue of God Apollo in the temple of Apollo, made of wood and covered in gold. There were many other sacred buildings, along with the Twelve Olympian Gods (the Dodekatheon). Delos had many other buildings like the theatre, gymnasium, stadium, hippostyle hall, a sacred lake with a monumental gateway entrance guard by marble lions.

There were commercial buildings that included markets, warehouses, and residential buildings dating back to the 2nd century BCE, with mosaics, wall paintings displaying the prosperity of the island ages ago. Out of the original nine lions by the Naxians in the 7th century BCE have five left, which have been proved to be a more significant attraction for archaeologists and visitors. Many mosaics have been discovered, along with the Dionysos seated on a panter.

“Many waters cannot quench love-neither can the floods drown it.” – Inscription at Straus Mausoleum, Woodlawn Cemetery You are clearly lying if you say that...
Read more

Have You Heard Of Living Bridges? Read On To Know More

Living bridges or root bridges are commonly found in Meghalaya, India. These  Living Bridges are natural yet man-made as they are built by Khasi people and...
Read more

Islands certainly make for an exotic holiday destination. From sitting under the rustling palms, sunbathing and gazing at the clear blue sea to engaging...
Read more

A mommy makeover is a popular cosmetic surgery procedure that many women choose after pregnancy and childbirth to restore their pre-pregnancy body shape. The...
Read more
Previous article
5 Important Things To Know Agarbathies
Next article
Are Coffee Beans Edible?

THC-O-Acetate: Things You Need to Know Before Buying