Do You Know The Mythological Story Behind The Festival Of Karva Chauth? Find Out The Truth Here 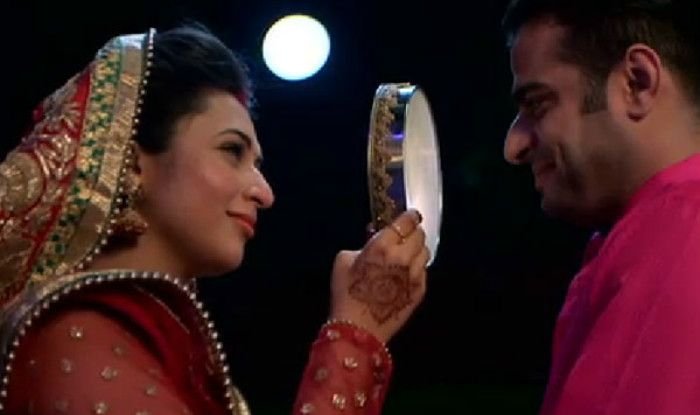 Admit it. You all have heard of Karva Chauth whether it is celebrated by your relatives or not. Being an Indian, I feel that Karva Chauth is as famous as Diwali or Holi, thanks to our daily soaps and Bollywood films.

Karva Chauth is the festival celebrated by married Hindu women. They fast from dawn till the moon rises; all this for the long life and prosperity of their husband. When the moon finally turns up, the women look at it through a sieve and then at their husband. Then she is fed water by her husband and her fast is broken. So we see husbands rushing home early from work on this day (otherwise God save them!).

But all this tells us how this festival is celebrated.

Do you want to know the mythological story behind this festival? Continue reading to find out –

The story revolves around a beautiful princess, Veeravati. She was married to a king. On her first Karva Chauth after marriage, Veeravati was visiting her parent’s place. She had been fasting from dawn. By the time darkness fell, Veeravati had become rather too weak. Finally, she could no longer bear the hunger and thirst and fainted.

Veeravati was the beloved sister of seven brothers. They had immense love for their sister and they decided to prevent her from fasting any longer.

Read Also – Did You Know About The Types Of Hell In Hindu Mythology?

From here, there are two stories that are popular.

The seven brothers placed a round mirror in a Pipal tree. They claimed that was the moon. Veeravati believed her brothers and thus she broke her fast.

The brothers made a fire behind the mountain and said that the glow was that of the moon. This tricked Veeravati and so she broke her fast.

As soon as the queen ate food, she received the news of her husband’s death. Here again, there are two versions. Some say that Veeravati wept copiously throughout the night. On seeing her misery, Parvati appeared for her rescue. The Queen explained how she had been deceived by her brothers. On hearing this, Parvati asked Veeravati to repeat the Karva Chauth fast the next day. It is believed that this second day of fasting compelled Yamraj to return the King’s soul.

On hearing the news of her husband’s death, Veeravati started for her husband’s palace. On her way, she came across Shiva and Parvati. They informed her that the King’s demise was because of her untimely breaking of the fast. Veeravati instantly asked for forgiveness.

Here again, there are two subsets of beliefs. One goes like this –

Parvati cut her little finger and gave Veeravati few drops of her holy blood. The queen sprinkled the blood on her husband’s dead body and hence brought him back to life.

Parvati forgave Veeravati but she said that the King would remain sick and unconscious for a hundred days. When the queen returned to her palace, she found a hundred needles pierced into the King’s body. Every day, the queen would take out one needle from his body and the King would get slightly better.

Eventually, just one needle was left and it was the day of Karva Chauth. Veeravati observed a fast and had gone to the market to buy things required for the puja. Meanwhile, a maid removed the last needle from the King’s body. The King regained consciousness. However, he mistook the maid for his queen. On returning, Veeravati was made to work as a maid.

Even after going through so much, Veeravati continued to love her husband and fasted on Karva Chauth for his longevity. Once, the King was leaving for another kingdom. He asked Veeravati (his supposed maid) if she wanted something for herself. She demanded a pair of identical dolls.

The King asked Veeravati why she kept singing that song. To this, she narrated the entire story to him. Thus, the King realized his mistake and accepted Veeravati as his queen.

Summer Fashion TipsIf you wake up every morning and find yourself staring blankly at your wardrobe in a never-ending dilemma of what to wear,...
Read more

Except you have been on another planet in the last few years, you may have heard about CBD. In the wellness and health community,...
Read more

Healthy eating is essential when it comes to preventing, controlling, and even reversing diabetes. Therefore, you will need to pay attention to some of...
Read more

Description: Fairness and integrity are Marvelbet's primary priorities. The bookmaker has established a reputation as a trustworthy app. More than a million regular gamers...
Read more

There are many reasons you might want to eat well in life. It could be that you have got an event such as a...
Read more
Previous articleSpine Chilling Story Of The Air India Flight That Crashed Within Minutes Of Take Off
Next articleIs Salt In Toothpaste Really Useful?

Include These Fitness Foods In Your Diet If You Are A Fitness Freak!

What Shampoo To Use For Kids Frequently Exposed To Chlorine?