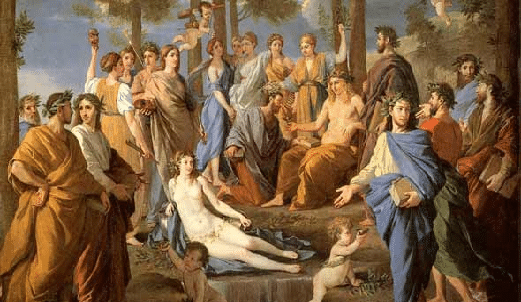 There is a vast majority of horrific deaths that took place in Roman and Greek mythology. Many of these deaths were caused by very gruesome and peculiar punishments that were imposed by the Gods. Here is a list of the most devastatingly repulsive deaths that occurred and the brutal sanctions that were given in the mythology.

In Greek mythology, Prometheus the trickster defied Gods and presented ‘Men’ with fire. For his disobedience, Zeus sentenced him to eternal punishment. Prometheus was chained to a stone, and every day an eagle (symbolising Zeus) would feed on it. Since he was immortal, his liver would grow back, and the eagle would again come and feed on his liver.

Once, Zeus brought Ixion to Olympus as a guest. Instead of being thankful, Ixion tried to seduce Hera (Zeus’s wife). As a result, Zeus blasted him with a thunderbolt and was bound to a burning wheel that spun forever.

Narcissus was the beautiful son of a river god. Echo (mountain nymph) fell in love with Narcissus, but he didn’t reciprocate her feelings. Consequently, Nemesis the God of revenge decided to punish him. She tempted him to a pool where he saw his reflection and fell in love with it and committed suicide.

Erysichthon was the king of Thessaly. He ordered to cut down the tree from Demeter’s sacred grove. This lead to the killing of one of the dryad nymphs, the nymph’s last words was the curse on Erysichthon. As a result, Demeter responded to the evil and punished him with endless hunger. When he was out any source of food, he ended up eating himself, and hence, died.

We all know Medusa, the woman with snakes for hair and could turn people into stone. But, she was not always this bad. Medusa was once a lovely woman and was raped by Poseidon in Athena’s temple. This was followed by Athena turning Medusa’s hair into snakes, for being such a temptress. Later, Medusa was killed by Perseus who got help from Gods to kill her, including Athena herself.

Read also: The myths and superstitions about birthmarks

Travelling might just be the essence of life. When you travel, you find out so many things about yourself and the world around you....
Read more

We’ve all eaten bananas – the classic yellow-colored fruit, rich with potassium. It’s simple – you peel the cover and eat what’s inside and...
Read more

When it comes to drug and alcohol addiction treatment, relapse prevention is critical. To maintain sobriety and keep on the path to recovery, it’s essential...
Read more

Mukbang and ASMR eating has been the ongoing trend of this "new generation," which is usually on the phone screen, scrolling through social media...
Read more
Previous article
MIY ToothBrush Bracelet Is What You May Not Know
Next article
Aam Aadmi Party In Pakistan: There’s Not One But Over Six AAP In Pak