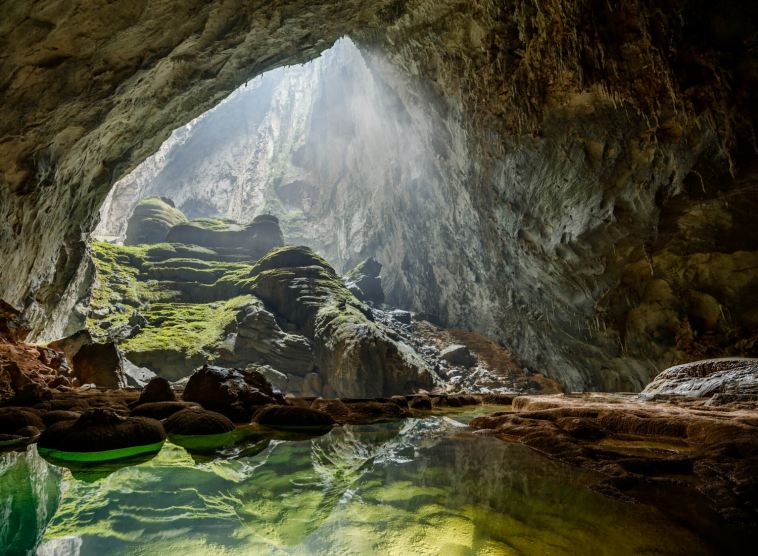 When mundane routines start gnawing at your fun and interesting personality, and when you’re tired of the cliche string of places to visit that are thronged by tourists, what you need is a break from the boring and the usual. This list of extraordinary places to visit around the globe will astound you with the stunning variety the world has to offer.

Table of Contents show
1 The Venice of Netherlands
2 2. The Tunnel of Love
3 3. The Atlantic Ocean and the Caribbean Sea at Eleuthera
4 4. Iceland’s Blue Lagoon
5 5. The Secret Garden
6 6. Museum Of Death
7 7. Hang Sơn Đoòng
8 8. Ko’olau Mountains, Hawaii
9 9 The Anechoic Chamber

The Venice of Netherlands

The village Giethoorn is conjointly referred to as “Venice of the Netherlands” and has no roads. The village was founded around 1230, has no modern transportation at all, and only canals and 176 bridges. People there use “whisper boats” to travel, named so because of their noiseless engines. That is why this village is so peaceful. The loudest sound you’ll ever hear is probably of the quaking of a duck. When the village was discovered, its first inhabitants found numerous peat deposits and dug up several holes over the years. These holes then turned into lakes.

The recently created islands were connected with over 176 bridges which gives the village a magical fairy-tale touch. Back in the days, Giethoorn used to be a pedestrian village. It became regionally noted, particularly in 1958, once the Dutch film producer Bert Haanstra created his noted comedy Fanfare there.

2. The Tunnel of Love

The Tunnel of love is a section of an industrial railway situated near Klevan, Ukraine. The tunnel of love links it with Orzhiv. It is a railway track surrounded by green arches and is three to five kilometers in length. It is famed among romantic places to visit who wish to take quiet walks. Its location is Klevan’, Rivne Oblast, Ukraine, 3531 and is open for 24 hours.

3. The Atlantic Ocean and the Caribbean Sea at Eleuthera

Atlantic Ocean water enters the Caribbean through the Anegada Passage lying between the Lower Antilles set between Cuba and Haiti. The Yucatan Peninsula Channel between Mexico and Cuba links the Gulf of Mexico with the Caribbean. It is one of the few places on earth where you’ll be able to compare the rich blue waters of the Atlantic on one side of the road and the turquoise-green waters of the Caribbean on the opposite side. The Glass Window Bridge is approximately 2 miles east of Upper Bogue and joins Gregory city and Lower Bogue at the narrowest location on the island.

The Blue lagoon is a geothermic spa in southwestern Iceland. The spa is found in a volcanic rock field close to Grindavík on the Reykjanes dry land, in a location favorable for the generation of geothermic power, and is equipped with water utilized in the nearby Svartsengi geothermal power station. The water’s opaque blue shade is because of its high silicon oxide content. The silicon oxide forms soft white mud on the rock bottom of the lake that bathers rub on themselves. The communal showers are split up by gender.

Children aged eight and below are solely allowed entry with the use of arm floaters which are provided free of charge. The lagoon isn’t appropriate for kids below two years. There is a personal changing room accessible for those with special needs. The Blue Lagoon was accidentally found in 1976 and after that people began to bathe in the rare water and apply the silica mud to their skin which cured many skin problems.

This is the entrance to the Secret Garden, Portland, Oregon in the hills on the west side of Portland. It is an amazing getaway that is hidden from even the citizens of Portland. Forest Park is a 5,100-acre city-owned park, one of the largest city parks in the country. Its address is SW Rose Garden Way, Portland, OR 97205, USA. The opening and closing timings are between 5 a.m. to 10 p.m. every day of the week. Unless you’re a ‘garden person,’ you’re not likely to take the extra time to go here but it’s one of Portland’s coolest spots.

For a really tiny annual contribution, you can have the garden completely to yourself early in the morning for coffee with a friend or small group. This is typically a place to seek out a parking spot. There’s a small incline walking up, definitely worth the little climb. This garden is always carefully attended to, and if you look ‘serene’ up in the dictionary, there’s likely to be a picture of this pretty place.

The Museum of Death provides a self-guided tour, approximately 45 minutes to an hour, but those who can stomach it are free to stay as long as they like. Museum of Death is a museum with locations in Hollywood, Los Angeles, and New Orleans. It was established in 1995 by J. D. Healy and Catherine Shultz with the museum’s stated goal being “to make people happy to be alive.” When I first heard about it I was amused! Might visit this one for sure.

The largest cave in the world, Hang Sơn Đoòng, is in Vietnam is over a couple of hundred meters high and is altogether a different world inside the cave. It has its own climate, jungles, rivers, and clouds within. Hang Sơn Đoòng was found by a man named Hồ Khanh in 1991 who used to reside nearby. The whistling sound of wind and the roar of a speeding stream within the cave could be detected through the doorway. The steep descent prevented the native folks from entering the cave.

Koʻolau Mountain Chain is a dormant fragmented remnant of the eastern shield volcano of the Hawaiian island of O’ahu. It was labeled as a National Natural Landmark in 1972. It is a beautiful trekking location bathed in the most luscious greens your eyes will ever see and the freshest air your lungs will ever breathe. Treet your eyes, lungs, soul and the mosquitos there (Just Kidding) right by visiting this earthy spot!

Are you tired of crowded cities and noisy traffic? Do you think a quiet room can help you with this problem? The Anechoic Chamber at Orfield Labs at Minneapolis in Minnesota is the quietest place on earth. This room in the above picture will change your definition of silence. This silence can drive you crazy, it is an acoustics and architecture test facility.

It is so quiet that even a minus 9-decibel level is too much!. You can even hear your own heartbeat and other internal organs. It is said that no one can last even for more than 20 minutes. You can’t go there unless you are a journalist who is there to make a documentary about it. Count these among places to visit that will guarantee an eerie experience.

These places to visit will have you itching to get up, hop on a plane and follow your adventurous spirit.

Read also: Visit These Waterfalls In Hawaii That Flow Upwards