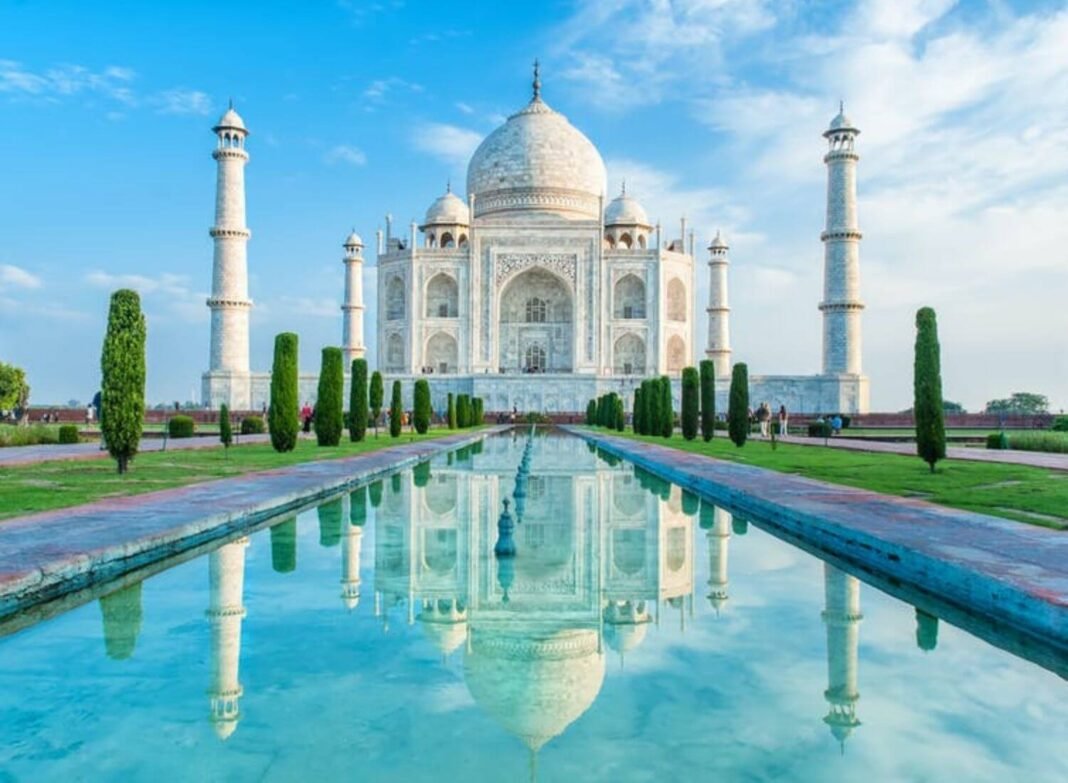 The Taj Mahal is considered the epitome of true love and passion across the globe. It was built by Shah Jahan in 1631, in memory of his loving third wife Mumtaz Mahal, who died on 17 June that year. The monument is described by the Nobel Rabindranath Tagore as ‘the tear-drop on the cheek of time’. Even today, the Taj Mahal is regarded as the best example of Mughal architecture and a true symbol of India’s rich culture and heritage.

But this precious monument is always surrounded by some hard-to-believe dark, hidden mysteries, myths, and controversies.

Table of Contents show
9 Dark And Untold Mysteries Of The Taj Mahal
1. A Black Taj Mahal was planned
2. Shah Jahan Did Not Build it!
3. The Unique Pillars Of Taj Mahal
4. The Cenotaphs Are Empty
5. Meaning Of The Name Taj Mahal
6. Removal Of Sanskrit Inscriptions
7. Optical Tricks Of Taj Mahal
8. The Mystery Behind The Water Outlet
9. The Monument Changes Colour Throughout The Day

1. A Black Taj Mahal was planned

A myth holds that Shah Jahan planned to build a Black Taj Mahal identical to the current one across the Yamuna river. The Black Taj Mahal would be built with black marbles. It was said that construction came to a halt after Shah Jahan was deposed by his son Aurangzeb and imprisoned for the rest of his life at the nearby Agra Fort.

The reason Shah Jahan wanted to build a Black Taj Mahal was for his burial. It is sad as Shah Jahan spent the last years until his death as a prisoner, gazing at the Taj Mahal from a window in the Agra Fort. Some people also add that Shah Jahan intended to connect the two tombs with a bridge across the Yamuna River, which would possibly be made of silver or gold.

2. Shah Jahan Did Not Build it!

It is believed that the Taj Mahal was a Hindu temple of Lord Shiva built by the Rajputs living in Agra, India. Shah Jahan conquered the temple when he won the battles against the Rajputs. It is believed that there are secret rooms and passages inside the Taj Mahal. Some corridors that lead to the secret room also have Hindu wall designs. These corridors are quite dark because Shahjahan had sealed all the riverside ventilators allowing no light and air. Some repair and maintenance workers claim to have seen Hindu paintings around the hidden parts of the Taj Mahal. Certain rooms and corridors are officially sealed by the Government of India.

This topic is quite controversial and can cause a lot of unrest, communal tension, and Hindu-Muslim riots in the Indian society and hence this topic is not supported or commented on by the Government of India and the Archaeological Survey of India (ASI). The government has also banned the book “The Truth of Taj Mahal”.

If the monument turns out to be a temple, then all the stories revolving around the monument and the love between Mumtaz Mahal and Shah Jahan will turn out to be false. It will also result in a huge loss for India on a global level.

3. The Unique Pillars Of Taj Mahal

The four minarets that surround the monument are not perpendicular to the surface. They are deliberately constructed slightly titled from the surface. It is done so to save the monument from natural disasters like earthquakes.

If an earthquake occurs and the minarets fell, they would fall away from the main structure which is the tomb. This way it won’t cause any harm to the magnificent piece of art. This shows that a lot of thought was put in by the architects while building this exquisite monument.

4. The Cenotaphs Are Empty

The whole world believes that Shah Jahan and his wife Mumtaz Mahal are buried beside each other in the Taj Mahal. But in reality, it is believed that the cenotaphs are like showpieces adorned with precious stones. The real coffins lie in a room that is closed for the visitors and cannot be opened. This room is probably never seen by anyone till now. Also, the cenotaph of Shah Jahan is uplifted more than that of Mumtaz. In ancient times, men had more authority so the male tomb had to be superior to the female tomb.

5. Meaning Of The Name Taj Mahal

The first glimpse of the Taj Mahal as you enter through the main gate will leave you almost awestruck. As the visitors walk closer to the monument, the Taj Mahal seems to get smaller in shape. And it seems to grow bigger as the visitors walk away from the monument. Many local tour guides of Agra say that when you are leaving, you are taking the Taj with you in your heart. The optical tricks used by the architects are remarkable.

8. The Mystery Behind The Water Outlet

9. The Monument Changes Colour Throughout The Day

At different hours of the day, you can see the Taj mahal in different colours. At sunrise, the beautiful monument seems to look light pink or grey. When the sun sets the colour of the tomb again changes to orangish bronze and it looks mesmerizing to watch. At night when the moonlight sparkles on the glorious Taj Mahal, the monument looks sparkling white just like the moon. These colours add to the beauty of the Taj Mahal.

The Taj Mahal historically has immense popularity in India as well as the whole globe. The breathtaking monument surely deserves a visit once in your lifetime. Let us know any hidden mysteries you know about the Taj Mahal in the comments below.

A lot of people don’t know this, but I spent a few of my high school summers in Germany with my aunt and cousins....
Read more

Pablo Escobar, popular as Robin Hood for the poor and an ambitious and violent Druglord to the rest; had, without doubt, grasped the world's...
Read more

One of the most significant factors that can be an indicator of overall health is your diet. What foods do you consume regularly and...
Read more
Previous article
15 Healthy Teas To Drink For Better Digestion
Next article
19 Exercises To Tone The Inner Thighs

Why Complete Stucco Remediation Is Essential For Your Home’s Health

Why is Mumbai more happening than Before?