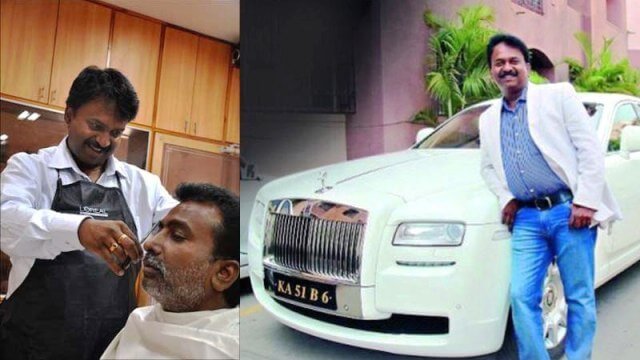 Have you heard of the Billionaire Barber Ramesh Babu from Bangalore?

He owns a fleet of more than 400 cars including  A Rolles Royce, Mercedes-Maybach S600,

BMW, and Jaguars.  This is just the beautifully ornamented external facade of his successful life.

Table of Contents show
His humble beginnings:
His journey

If one would dig deeper, his was a life of adversity and poverty which he won over with his strong determination and willpower.  Having lost his father at a tender age, he had a salon left behind by his father. His mother worked as a maid to bring them up. They could afford to eat just a single meal a day. He delivered newspaper every day from the age of 13, to supplement the meager income of the family. His life was indeed hard. Once, He was sent away from school because his trousers were torn but he couldn’t afford to buy a new one either.

After enduring the initial life of hardship, he purchased a Maruti van in 1993.   Nandini Akka, as he called her, a woman who had employed his mother, had asked him to rent his car which would help him earn money.

Thus, began his car rental business which flourished with time.  The path ahead was filled with several challenges and pitfalls. But that didn’t deter him and he only grew stronger. He had to shell out crores of rupees only as road tax for his luxury cars, but he continues to dream about more expensive cars. the best thing about him is that he hasn’t forgotten his roots. Ramesh Babu still gives his customers a haircut for Rs.150/-. He has also trained his children in the art of hairdressing.

This extraordinary success story of a simple barber reminds us of the fact that we can achieve whatever we want to if we have the courage and the conviction to work hard to achieve our goals.

Watch this Ted talk given by Ramesh Babu to delve deeper into his life:

Read also – Surprising Mysteries and Myths Behind the Titanic

Are you normal? It might seem like an easy question, but our brain is a complex organ. Human beings are yet to understand its...
Read more

Mukbang and ASMR eating has been the ongoing trend of this "new generation," which is usually on the phone screen, scrolling through social media...
Read more
Previous article
Surprising Mysteries and Myths Behind the Titanic
Next article
8 Dark Secrets of Modelling Industry

The secret to glowing skin unveiled- it’s in your own kitchen!