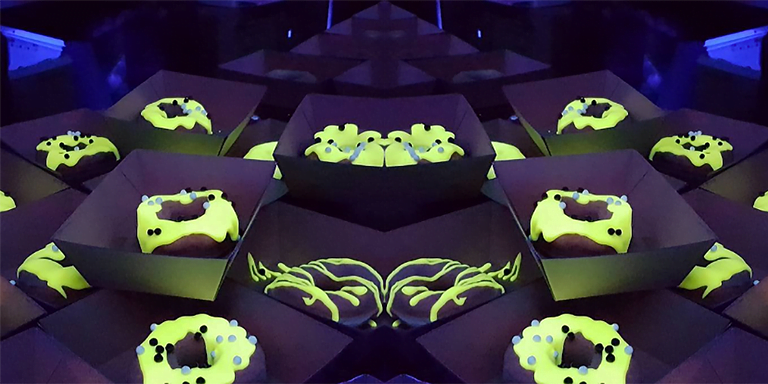 Let’s face it, that we’re all night crawlers. We wake up at night and search for food while everyone else is asleep. Yeah, we know late night snacking is unhealthy. But, how can one resist when one of our favorite food glows in the dark. There is just no ignoring it. The Black Star Pastry in Newton (AUS), founded by Christopher The, has developed doughnuts that glow in the dark and are called ‘GLONUTS’ and the social media is going crazy about them.

Black Star Pastry is famous for their Strawberry- Watermelon Cake and is a treat for the eyes. And now they have ‘Glonuts.’ The icing on the Glonuts doesn’t contain any added coloring or preservatives and is completely natural. It looks like it is radioactive but the owner of the Patisserie boutique confirmed that it is absolutely safe to eat as it is made from Riboflavin (or Vitamin B).

Riboflavin which glows under UV light and is completely natural. It is quite acidic, and the icing is made from Yuzu glaze, which is a  mandarin orange-lime hybrid. Glonuts glow under black light and this idea came to Christopher. The’s brilliant mind while he was walking around the Vivid festival which is an annual outdoor lighting festival with immersing light installations and projections in Sydney.

He was looking for ways to link the food with the amazing light installations around. He found the solution in Yuzu and Riboflavin, after much deliberation and experimentation. And this doesn’t end with the doughnuts. They bestowed us with glow in the dark doughnut balls and Dark sesame Yuzu cake and even drinks. ‘When food can capture the imagination like a glow-in-the-dark doughnut, it’s no wonder they have taken off!’ Christopher said. People are going crazy over these doughnuts, and if you’re a food enthusiast, you can grab these doughnuts for $7 at the Black Star Pastry in Australia.

Also, you can even make your own Glonuts at home. Check out this video!

In case you head to the salon for a facial cleanup or any other treatment whenever your skin feels dull, here's something that will...
Read more

A good backpack will complement your looks. However, other than the design, there are a couple of factors you need to consider, especially when...
Read more
Previous articleIntroducing The Rare Floating Post Office
Next articleDark Chocolate Miracles – Who knew dark chocolate can be this useful

Did You Know That Chimpanzees Are Smarter Than Humans?