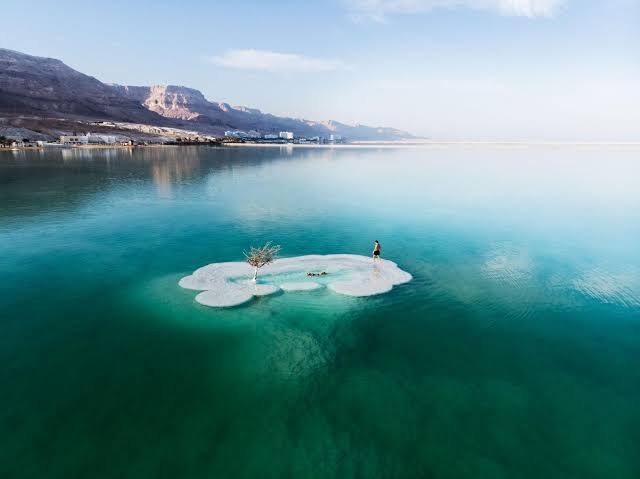 The Dead Sea is a salt lake located at the Jordan Rift Valley and is the deepest hypersaline lake in the world. It is one of the world’s saltiest bodies of water and this makes it harsh for the flourishing of plants and animals. It is also a supplier of a large number of products like asphalt and potash. The Jordan River is the only river that flows into the Dead Sea. There is a scarcity of rainfall in all the areas which are actually surrounding the Dead Sea.

Throughout the year, we can normally see sunny skies and feel the dry air in this place. It has higher oxygen content and the water affects the temperature and climate to a large extent. Sea temperatures are higher than the land temperatures during the summer season in this area. Animals like hares, foxes, jackals and leopards can be seen in the mountains surrounding the Dead Sea.

The main debate among the environmentalists has been the shrinking of the infamous Dead Sea. In the last few years, Dead Sea has been found to be shrinking to a large extent because of the diversion of incoming water from Jordan River to the north. Some officials are of the opinion that this might be happening because of the industrial activities around the Dead Sea.

The Dead Sea is also a place to find the treatment for various diseases in the dermatological, cardiovascular and pulmonary fields. The excessive salinity of the Dead Sea makes it home only for some bacteria and protozoa.

Some historians have also argued upon the fact that the lost cities of Sodom and Gomorrah are submerged inside the Dead Sea. It is also recommended that one should not try to swim in the waters of the Dead Sea. While swimming upside down, it is very obvious that the people are going to swallow water with a high amount of sodium that may cause lung damage and heart failure.

It has been observed from the last few years that salt crystals are piling up at the floor of Dead Sea and this has been a great help for scientists to understand the formation of large salt deposits. The salt layer has grown up to 4 inches thicker every year in the floor of the lake. A group of scientists have also said that it is the effect of the waves that create small salt fingers. During the summer season, heat from the sun warms up the lake and water evaporates from the top layer of the lake.

Recently, researchers from U.S. and Israel have solved the theory of sinking salt crystals and have said that this is the process that leads to the slow falling and enlargement of salt layers at the bottom of Israeli-Jordanian Lake. Overall, it can be said that the properties of the Dead Sea are both useful and harmful for human beings as a result of which, it remains one of the mysterious and known names among the list of small lakes and seas around the world.