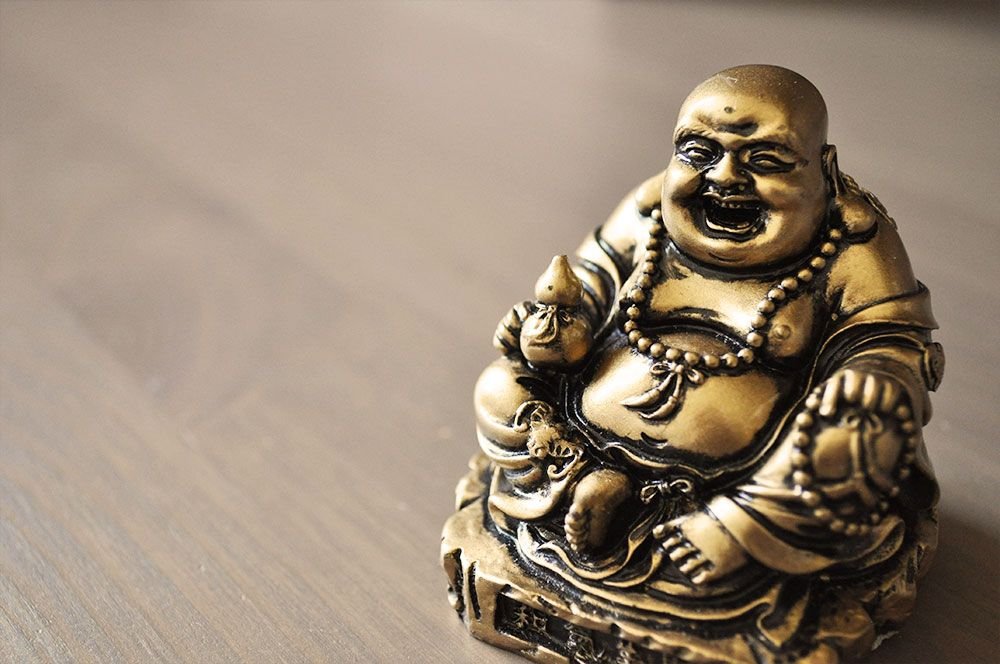 Table of Contents show
Laughing Buddha
Although, if you have seen the well-known Laughing Buddha, he is always jolly and fat. So which one is real?
Another possibility is that it’s a case of mistaken identity.
Image source

The story behind the real Buddha statue!

As I was watching a picture of a laughing Buddha on my desktop screen, it caught my interest, that how & why the Buddha became fat.

When you visit the Buddhist temples in Thailand, Korea, or North-East India, you get to see a lean statue of the Buddha with an average body build.

Although, if you have seen the well-known Laughing Buddha, he is always jolly and fat. So which one is real?

Originally, the Chinese introduced the laughing version of Buddha. Good health and fortune are associated with chubbiness in traditional China.

Earlier, when food wasn’t so ubiquitous, the ones who had a surplus to eat were considered well off.

Given this logic, why not show someone as ‘enlightened’ as Buddha being fortunate and wealthy. Of course, now that is not the case, as we associate being overweight with poor health.

Another possibility is that it’s a case of mistaken identity.

People have confused the Buddha with the deity of Budai. Budai was a monk of Chinese-Buddhist religion who lived in the 6th century. In Chinese Folklore, the statue of Budai represents contentedness. The name ‘Budai’ means ‘cloth sack’. The Budai carries a cloth sack that has all his limited possessions. He is content and happy even though he is poor.

The real Buddha (Gautama Buddha or Siddhartha), was a prince who left the city to go live in the wilderness for six years.

He renounced all extremes- such as eating too much or too little- to seek enlightenment. In the end, he was really lean, and there is no reason to think he was ever fat.

Different places depict Buddha differently. This is because there is no photographic record of the original Buddha.

Did You Know The Myriad Health Benefits Of Flaxseeds?

Flaxseeds or linseed or alsi as it is known in India has myriad of health benefits when consumed in right proportions and the right...
Read more

Monsoon has arrived with its freshness. We wait eagerly for the monsoon to come and the drops of water to refresh our mind. We plan...
Read more

Your body is an incredibly complex machine. There are still plenty of secrets regarding how some parts work, and research into these things is...
Read more
Previous article
Alfred Hitchcock Was One Of The Most Cruel Directors In The World!
Next article
Are You A Traveller? Read On To Know More About Hitchhiking