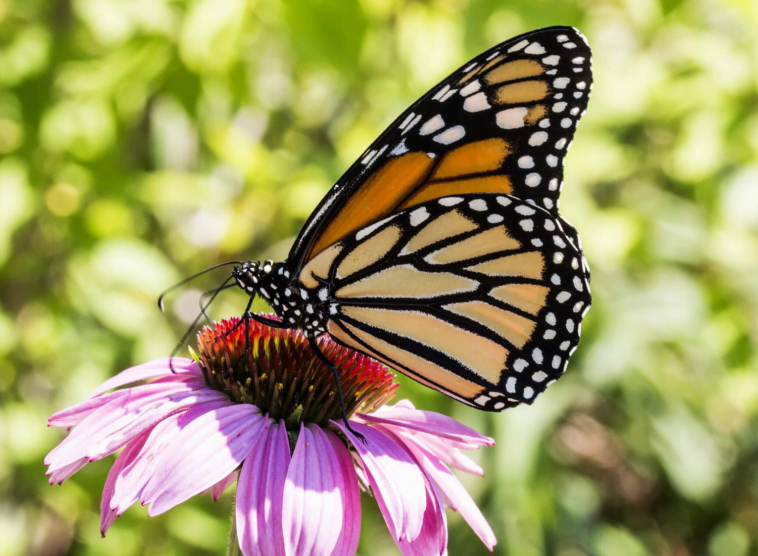 Have you ever wondered why one of the most beautiful insects in the world is like it is? Why are butterfly wings iridescent?

Table of Contents show
1 How does this happen?
2 Iridescence in butterfly wings
3 So how do you get iridescence?

How does this happen?

The pigment is the one that provides color in cells and tissues and it is the same in every angle, hence giving it the name ‘ordinary color’. So how does that happen? The pigment absorbs all colors except one, like chlorophyll which absorbs every color but green hence leaves are always green. Even melanin which is present in skin cells absorbs every color but yellow hence everything appears brownish. The more the melanin in your skin, the darker your skin tone will appear. Hence albinos lack that certain pigment. Did you know the people with red hair have an iron-based pigment present in their cells?

Iridescence gives the shimmery effect to the butterfly wings. It is some kind of spectacular glitter material present. And the color changes every time the wing is moved as it is relative to the color absorbed at that particular position. There are so many beautiful creatures who have this effect in their skin like fishes and their scales, peacock feathers, etc. Aren’t they just breathtaking? Also, peacock feathers led to the investigation of iridescence.

So how do you get iridescence?

Imagine an oil slick on a water surface in a tank. Now when a light source, say sunlight falls on it, some light is absorbed but the rest of it is reflected back. Now, there are two surfaces on which the light is bouncing, the oil and the end of the water tank, hence it gives an effect of 2 colors as their phases match or join at some point and hence iridescence is observed. Iridescence is obtained by constructive interference.

So if a white light hits a transparent object and if the object is multilayered like the oil and water or bubbles, some light will reflect off and some is going to go through and if the light from top and bottom are in phase with one another separated by many wavelengths, they will amplify one another and if it’s white light, then depending on the angle we get to see all the colors present in a rainbow (iridescence).

There are scales present in the skin and as the surface goes deep, each surface bounces light wider. But there is space in between and say space is about 200 nm and blue light is 400 nm in wavelength. Since 200 is half of 400, the blue light gets a better chance at reflecting back and the blue Morpho butterflies have this effect due to the space in scales. All of it depends on the angle of light and the way you’re looking at it. Butterflies get to fly with the energy provided by the sun.

Hence these things affect the color of the wings- pigment, and structural color build up. It is said that if you touch a butterfly wing, they die. But this is not true although if you touch it, their scales come to your fingers which appears as a powder- that is how fine and delicate they are. But if you break the wing, due to the veins present, they are bound to die. So you can graze against it but don’t break it. These beautiful creatures are meant to be savored with your eyes, hence, take care of them!