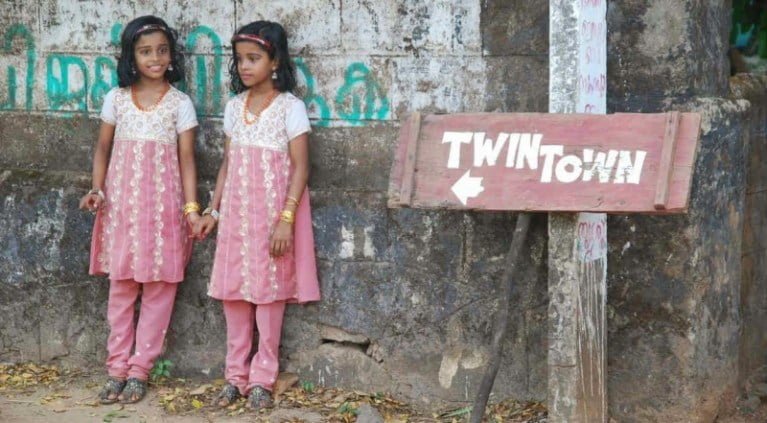 The world is a very complicated but amazing place. Bizzare and strange phenomena keep occurring around the world which baffles the ever-growing intelligent human beings. Most of the mysterious things are still unanswered. Among them is a village of twins in India which has left even the scientists scratching their head.

Kodinhi is a small village in Malappuram district, Kerala. A very peaceful and quiet place, Kodhini is home to about 2000 Malayali families.

When you get there, you will not notice anything peculiar at first glance. But, something extremely strange about the people living there will soon come to your notice.  You will notice twins everywhere, all ages, both identical and fraternal. Weird, right?

India has low twin birth rates in the world, but of course, this village has defied all statistics and not to forget the very rule and consistency of mutations and genetics.

According to a survey, there are more than 220 sets of twins born in these 2000 families. It is almost 6 times as many twins born as compared to the Global average.

Table of Contents show
1 More Fun Facts about Kodinhi
2 There is a vague Mystery!

The unusual birth rate of twins in this village is a real mystery. Villagers say that the twin phenomenon began at Kodinhi only three generations ago. That is, since the last 60 to 70 years.

To add to this oddity is the fact that the women from Kodinhi who marry in far-off places are also known to give birth to twins.

The local doctor and twins enthusiast, Krishna Sri Biju says that the rate is increasing in a steady manner. The registered pair of twins is 220, but the real number is supposed to be much more than that. And the good thing is that all the twins are healthy and free from any disabilities.

There is a vague Mystery!

Kodinhi is now a major subject of research for the International team of genetic resources from India, Germany, United Kingdom and other countries. All types of genetic, biological, molecular, hereditary and climatic factors are being observed but they’re yet to arrive at a satisfactory conclusion.

Some say that the secret hides in what they drink and eat but it is not yet clarified. In addition, people here are poor and lead a simple life. There is no chance of any Fertility Treatment or Artificial Insemination.

What’s going on in this village? Does it have something to do with science or is it a miracle? Why are scientists still unable to find out the right reasons behind the birth of so many twins? These questions are still unanswered.

However, Kodinhi is not the only village in the world with unusual high twin birth rates. There are two other villages like Cândido Godói in Brazil and Igbo-Ora in Nigeria.

If you get a chance to step into Kodinhi, keep your brain and eyes all-time active and be on the lookout for as many twins as you can find.

Read also- Do You Know About The Door To Hell?