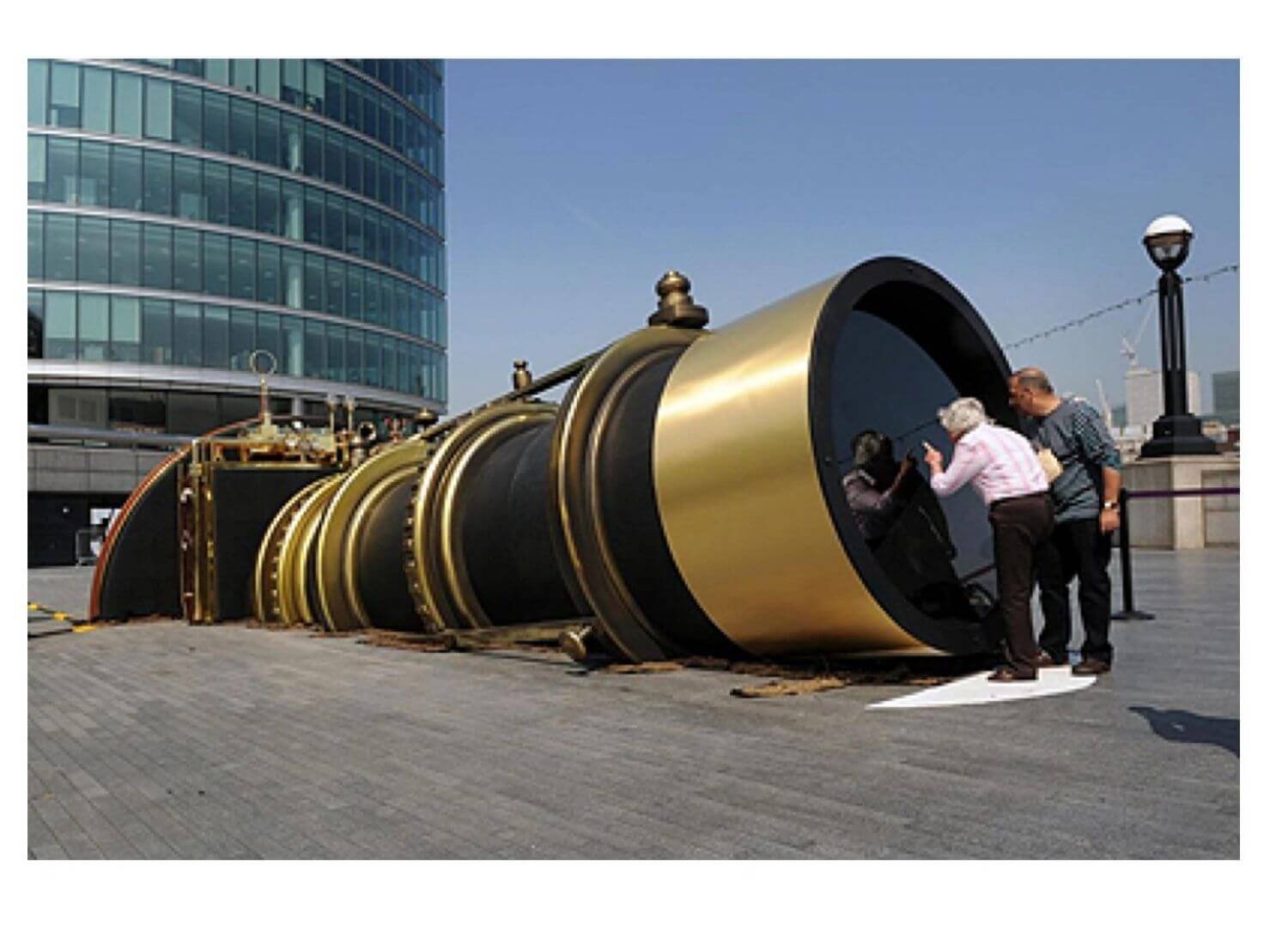 The Giant Telectroscope was a device that helped people see on the either side of Atlantic Ocean or places that are distant via broadband satellite facility. Amazing isn’t? Yes the world we live in does hold these types of technology and to our amusement one such type of technology has been used for connecting two distant places of the world. Let us dive in to know more!

Well as a child have you ever wondered what would it be like to dig a tunnel at one part of beach to any other part of the world? It sounds like a cartoon character’s gadgets but still this is true and thing like this does exists.

Since you have already thought about it at some point of time in life, if you wish to visit a place like this then head to either Great Britain’s capital city or Brooklyn to experience the dream you have watched turning into a reality!

The Giant Telectroscope linking two cities in the world makes it possible to see people on the other side of the ocean closely than ever before! Yes people at distant corners can see each others closely. And the distance is not little but vast distance.

Table of Contents show
Whose brain was it?
And This Telectroscope Is Simply One Of The Best Things To Happen To Mankind In The 21st Century!

Whose brain was it?

This Giant Telectroscope that links London and New York is the brainchild of Alexander Stanhope St George. He was the one who suggested this idea and made it happen. He was really very fascinated with illusion and reality. And hence, he decided to make two telectroscopes that would be operated with the help of optic fiber that was caste in brass material.

It is not a means of transportation but is an art project that allows people to see through two distant cities. People in New York while standing on Brooklyn Bridge could watch and talk with their friends, family, siblings, lovers or anyone who is standing in front of or near by Tower Bridge that is in England. People can communicate standing here they can call each other via cell phones and see each other. And feel that the are closer to each other. Technology actually has made the world small, not in geographical terms but in terms of communication. And the world now does looks small and near.

In terms of measurement, the giant Telectroscope is 11.2 meters tall. Even though it was Alexander who first had the vision of the Victorian style webcam, it was his great grandson Paul St. George, a British artist who brought his vision to life.

However, The Transatlantic Tunnel is not actually a tunnel!

It is a transatlantic broadband connection, handled by Tiscali, an Italian internet provider.

And This Telectroscope Is Simply One Of The Best Things To Happen To Mankind In The 21st Century!

Lots of British people could get a glimpse of a different life across the ocean, and it was probably one of the most beautiful things that had ever happened to them in their entire life.

And the Americans will surely second that statement. People could catch a sight of their friends and family living on the other side of the world, make new friends, propose their lovers and even flirt with each other!

One woman, working in London, could see her two-year-old daughter living in New York on her birthday.

And since verbal communication wasn’t possible through the Telectroscope, she used fancy placards to do that!

Science and Technology have surely made it possible for humans to face time or video chat with each other through their smartphones.

However, the joy of going to a huge telescope like equipment and having a super close look at your kith and kin is just an unrivaled experience. Isn’t it?

So whenever you get a chance do visit this place. and praise the technology that we have. It has made our large world a little small. Enjoy being a part of this global village.

And do remember to share this article with your friends and the loved ones to let them experience the same amusement you had. Stay connected!

Ever after 4 October 1957, 7:28 PM, when the first Satellite Sputnik1, was sent into space by the Soviet Union. Many Countries from all around...
Read more

What is Depression: The Signs, Symptoms and Solution

These days a word is very common among youth and other generations too which is DEPRESSION. We all must have heard about this, but do...
Read more

Turkey holds an eventful history since ancient times. But apart from this, it has also been rich in showcasing the wide range of cuisines...
Read more

Mukbang and ASMR eating has been the ongoing trend of this "new generation," which is usually on the phone screen, scrolling through social media...
Read more
Previous article
The Story of Boota Singh: A Lover Who Transcended Boundaries For Love
Next article
10 Unique Museums around the World!

Here Are Some Smart And Effective Management Of Sport Injuries

Have You Heard Of The Third Order Island ?