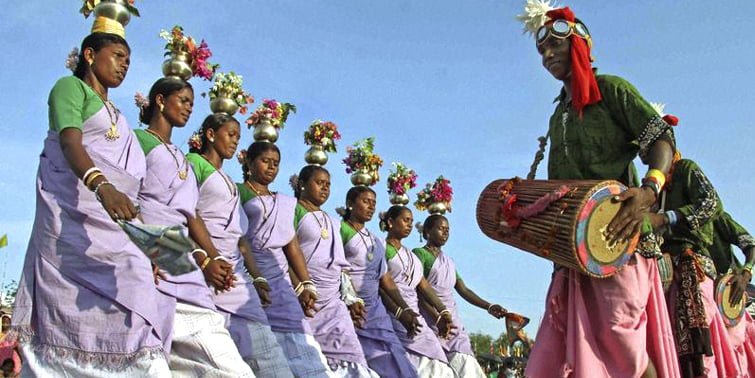 India is prominently known for its complex and diverse culture. The uniqueness of India lies in its distinct traditions and different groups of people. The tribes of India reveal a very interesting picture of the country. The word tribe is taken from the Latin word tribus which mean inhabited place. According to Risley, an Indian tribe can be defined is a group of families having a common name. This does not specify any occupation but their common descent from any historical or mythological families, especially animals.

The Maler practice several distinctive social customs. Forest influences the life of the Maler in many ways. Since the Maler live in the rough areas, hunting and food gathering supplement their resource to an excellent extent. Shifting cultivation is the main occupation of the Maler. Women usually collect the Mahua flowers and use them in multiple ways. Dried mahua flowers are eaten when processing and might be preserved for a long time. It’s a crucial economic supply. The main use of mahua flower is to prepare local liquor to attract local consumers. It’s needless to mention that the mahua liquor is a delicious drink.

The Chenchus are a semi-nomadic tribe of Andhra Pradesh, completely depends on the forest products. Hunting and gathering are the essential sources of their livelihood. The Chenchus do not stay permanently in one area in the forests.  The Chenchus live in nuclear families. As agricultural activities require a large number of human beings they keep away from cultivation. Such a way of life is embodied in their culture, hence nomadism rather than settled agriculture.

The Birhors migrate from one place to another when exploitation of the forest products gets over in a particular
place. Mostly they stay in the midst of the forests where they ought to get sufficient games for hunting. The Birhors are experts in monkey hunting and wander extensively in search of it. Sometimes the municipalities of South India invite them to hunt monkeys simply to put an end to the monkey threat in their localities.

Hunting and food gathering are the principal supply of their sustenance. Ropemaking is a subsidiary source of their livelihood. There are some other peculiar customs amongst the Birhors. Birhors devote their complete existence to secure immunity with the help of magical powers against these malevolent spirits as believed to be the reason of death.

The Kadars are generally in Trichur and Palghat districts of Kerela. The name Kadar is derived from the term ‘Kadu’ that means ‘forest’. This meaning suggests that the Kadar tribes closely associate themselves to the forest. The Kadars are a forest-dwelling wild tribe who stay in thick forests. Though the Kadars live in dense forests, they have had social contacts with other tribes in the locality, however, there is no case of inter-marriage. The Kadars are essentially hunters and food collectors. Collection of jungle products is the essential supply of livelihood. They accumulate roots, fruits, tubers and honey, hunt animals and go fishing. They barter forest products for rice, chilies, opium, tea, and cloth.

Digging stick is the principal tool for digging out roots and tubers. They also have stone and iron-headed sticks. They now use iron-head sticks frequently. Regarding the use of these iron sticks, the Kadars have a fable that there was a Golden Age in the past when the jungle was full of fruits trees and edible animals, especially black-monkey.

The Juangs are found in Keonjhar and Dhenkanal districts of Orissa. However, the higher concentration of the Juang population is in Keonjhar district. The Juangs are one of the aboriginal Mundari speaking Scheduled Tribes of Orissa. They are primarily hunters, food gatherers, and moving cultivators. Barter economy prevailed among the Juangs. The Juangs are rigid and culture-bound people. They trust in supernatural powers and spirits.

The Juangs have a strong belief in their religion, and it guides their social activities. Festivals, rituals, and ancestor worship are quite common. The institution of the priesthood is pretty strong. Unlike the Kadars, the Juangs have a strong clan organization. Every clan has a totem consisting of its members.

The Bhils are one of the biggest tribes in India. They have occupied a large territory in the states of Rajasthan, Madhya Pradesh, Gujrat, and Maharastra. The Rajputs gave due recognition to the Bhils. Earlier there were no village councils in the village and thus, the people approached the elders whenever required. They talk Bhilli which belongs to the Indo-Aryan the family of language. They also speak the language of their habitation. Being settled agriculturists they are better off and are in Government jobs. Some of them are agricultural laborers and factory workers.

The Indian Tribe definitely depicts a beautiful picture. It is very important for us to know and understand their culture and the way they live.

Read Also:  8 Literary Characters Every Millennial Can Relate To.

Do you love classical literature, the real literary gold? Then you must have found many characters that truly resemble you or the people around...
Read more

A temple is a place where people pray to God. However, we forget that temples are much more than that. Apart from the religious...
Read more

Mount Everest, which is also known as Sagarmāthā ( ‘forehead of the sky’) is located in Nepal Tibet-China border. Its peak is about  8,848...
Read more

Your body is an incredibly complex machine. There are still plenty of secrets regarding how some parts work, and research into these things is...
Read more
Previous article
Tomato Ketchup: The Red Elixir of SAUCY DRAMA
Next article
How Do Your Food Choices Help In Determining Your Personality?