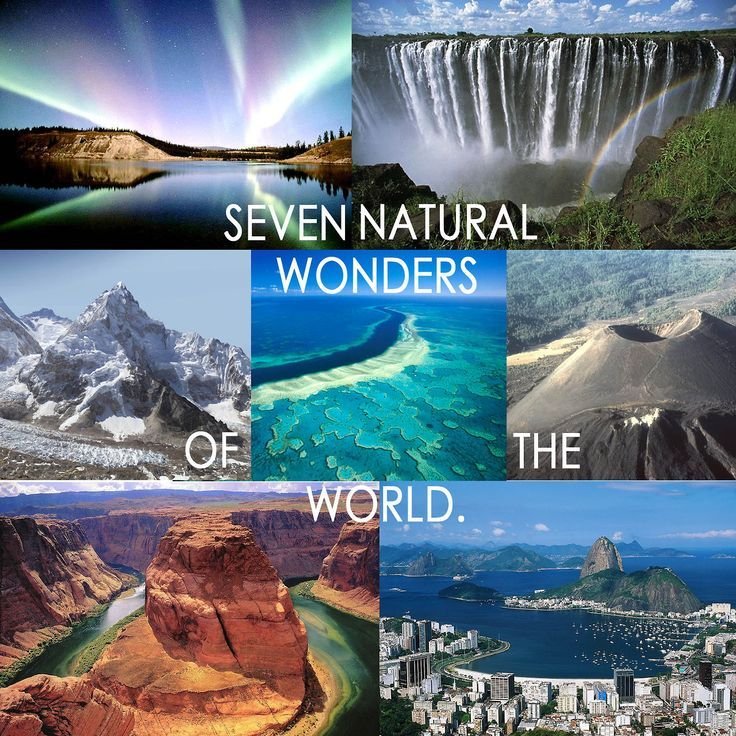 You might be acquainted with the Seven Wonders of the World, but ever heard about the Seven ‘Natural’ Wonders of the Earth? Well, Mother Earth has given a lot to us to wonder about! here are the best 7 sorted out for you!

Aurora is beautiful colored light seen around the northern and southern magnetic poles. The Aurora that is seen in the northern hemisphere is known as Aurora Borealis and the one seen in Southern Hemisphere is known as Aurora Australis. This beautiful phenomenon occurs due to the collision between gaseous particles in the earth’s atmosphere with charged particles that are released from the sun’s atmosphere.

The Harbor of Rio de Janeiro in Brazil was formed due to the erosion from the Atlantic Ocean. It is also known by the name Guanabara Bay. There are a number of islands in front of the Guanabara Bay including Governor’s Island, Fundao and Snakes Island. The bay is surrounded by beautiful mountains namely Sugar loaf mountain, Corcovado Peak and the hills of Tijuca.

The Grand Canyon in the state of Arizona, North America is a canyon with steep sides and the river Colorado flowing through it. It is managed by the Grand Canyon National Park. It is about 446 km long, 29 km wide and has a depth of about 1,857 meters.

Read Also – You Need To Know About the Russian Mountains, the Precursors to Roller Coasters

The Great Barrier Reef in Australia is the world’s largest coral reef. It consists of over 3000 coral reef systems and is immensely rich in marine life. It comprises of hundreds of beautiful and breathtaking islands which have some remarkably stunning beaches.

Mount Everest is the highest mountain peak on Earth known to mankind. It is about 29,029 ft above sea level and is 8,848 meters tall. It lies along the northern border of India.

This volcano emerged in the corn field of a Mexican farmer in 1943 and left him and all the people around terrified. It is located in the Mexican state of Michoacán. The cone of the volcano is 424 meter high. This volcano gave researchers the opportunity to study the complete life cycle of a volcano.

Victoria Falls located at the border of Zambia and Zimbabwe is also known as the greatest curtain of falling water in the world. It has a height of 108 meters and a width of 1,708 meters. It is located on the Zambezi River.

Read Also – What In The World? Artifacts That Stumped Experts

Sometimes when you are looking for an engagement ring, diamond necklace, earrings, etc., pre-designed jewelry at a store may not meet your requirements. You...
Read more

As we all know, many people might start their day with a cup of coffee to boost their energy and metabolism daily. But now,...
Read more

Peptides are supposed to be precursors to proteins that need a minimum of fifty bonded amino acids. Peptides are formed when two or even more amino...
Read more

One of the most significant factors that can be an indicator of overall health is your diet. What foods do you consume regularly and...
Read more
Previous article
Why Do People Cover Their Head During Worship? Know the Reasons.
Next article
Was Abraham Lincoln A Bartender?