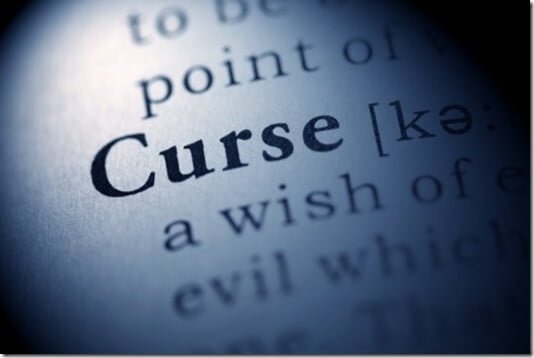 Since time immemorial, our magnanimous Gods have been known to bestow blessings and curses to humankind. Something which angered them often led to a punishment which one would suffer until they repent for their sins.  This right to curse was then bequeathed to the voices of Gods and then adopted by the religions. What God did in the mythological stories, can now be seen very much to be prevalent in the present times.

A series of misfortunes in your life convinces one to the presence of a curse placed on them by someone. We can regard it as a matter of what one believes and what not. This article does not claim to question or insult any religion’s – or any person’s- belief, for that matter.  This is wholly based on the research that was done did beforehand.

To be very honest, I do believe that curses exist and they really work. But, simultaneously, I don’t give it importance enough to create a phobia of them in my mind. Neither the happenings of my life are always ascribed to curses. What my viewpoint is that it all comes back to the person who might have once performed an unrighteous act.

Karma always gets you. This is what I consider the concept of curses to be. And isn’t this the more practical approach while understanding this simple notion of curses, instead of having and creating a phobia of the same? The term used for phobia of being cursed and fear of curses is DEPRECOROPHOBIA. There is no practicality of the curses, neither a scientific proof that they do exist. Therefore, some might argue the nonexistent nature of curses. Curses can be said to be resulting from the concept of cause and effect.

Role of Guilt and Regret

For example, if you kill someone, it is not always necessary that you are cursed, but the real curse is set on you in the form of guilt and punishment you deserve for doing that act. This guilt and regret makes you suffer, diverts your attention and focus ultimately resulting in misfortunes of large and small scale. Moreover, it’s all a play of one’s mind.

Say, I haven’t done anything ill or something which would make others curse me and still I am facing misfortunes in my life. If I believe that what I once sowed is what I am now reaping, I can validate the existence of the curse. But on the contrary, if I know I am innocent and right, I would not consider someone’s curse to be the reason behind my conditions. You agree on a fraudulent deal with someone, and ascribe it all to curses by someone you might not strike an equation with, is completely a fault on your part and no one else’s’. It is only when we do wrong to someone, is when we should be afraid of curses.

Curse or Boon is indirect karmic capacity you can transfer to another person. When you meditate, you start accumulating good karma. When it reaches a certain limit you get the capability to do certain things.Every time you curse or give away a boon, you would lose the corresponding amount of your good karma. I faintly remember a story of a person, who gained a certain amount of power after meditating in the forest. He then came back to live among normal people. He started giving blessings to people he liked and cursing people he didn’t. So unfair, isn’t it? The cursed might have just sat and waited because very soon all his good karma was exhausted and he was powerless. In the process, he also accumulated bad karma and had to suffer due to his recklessness. You see?

People do place curses on one another (although it is less frequent and not as scary as people might think). This is where the concept of curse energy comes into play. The expansion of energy into wishing ill of others is known as curse energy. When this curse energy is adopted and applied to the field and life, the curse starts working.  This mainly happens in two cases. First, as aforementioned, in the case of guilt and feeling that one deserves punishment. The sense of guilt and responsibility acts as a receptor for curse energy.

The other method is when you are afraid. The belief that something is all controlling and has a real power, you tend to succumb yourself to the energy leading the curse to work upon you.

Curses can only be removed and made power free. When one is not afraid and is confident enough of their righteous behavior, they need not fear. Everything’s a game of the mind. This concept of curse can either ruin you or can even raise you from your present position to a better one. Only if you get free of this fear, can you be free from the guilt and responsibility and ultimately of the curse.

Another example to prove it’s all that your beliefs say is when there’s a debate topic for e.g., “Mobile phone- a blessing or a curse”. It is what you believe in, which will help you convince the audience as well as yourself that mobile phone serves as a boon or a bane. This canonical aspect has indeed found its place in the modern sense. Convoluted in its sense, one finds hard to settle upon the quandary of the relevance of curse. The censure of Gods in mythological tales has however given license to some people to collect money in the name of God’s anger or curse upon people to be ultimately freed by only those selected persons. The only solution for this is to not do anything which would instill fear and doubt in us.

Living peacefully and without doing anything to harm others might be a way out of this. Not letting the money grabbers use it as their prerogative, and living guilt free is the best way to even let the concept of curse bother you.

So, live happily and peacefully.