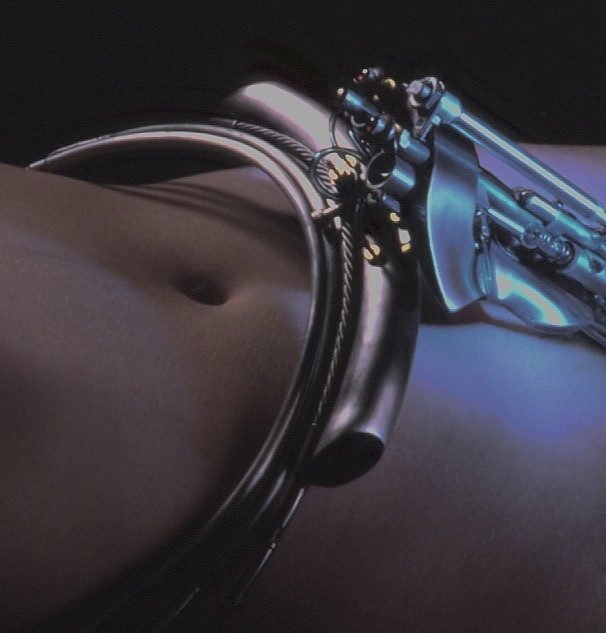 A woman is capable of helping herself in any adversity. But the mentality of some people today is still forcing society to become a bit more conscious when it comes to women. Still, there is a community of people who have narrow thoughts about everything actually. Those who feel that their lust and thirst are not satisfied and women are meant for them only. Here is a list of 10 Oustanding Anti-Abuse Devices for Women which particularly are meant for these small-minded people.

Nadja Bjork along with a group of other Swedish teenage school girls as their entrepreneurship school project designed this Anti-Rape Buckle. It requires two hands for removing this belt and thus makes it impossible for the rapist to attempt this ravish act of rape. The belt was sold for $50 in the united nations with future plans to produce more of its kind. These teenage girls have already succeeded in selling 300 belts to the people in Sweden.

These hairy stockings first appeared on a Chinese website named “China Smack” in the July of 2013. A model was seen wearing these hairy stockings/tights on her legs as their advertisement cover. People were totally startled by this idea of keeping the bad people away from being attracted by their legs. Later on, these become viral as an anti-abuse devices. Many companies then started to manufacture these stockings.

This device though looks like a cute toy piece but has a very big purpose with it. This buzzing device looks like a small keychain and has a rod with a drawstring.  When this drawstring is pulled off, it creates a sound of 90 decibels. This much loud buzz is enough to scare any attacker and further notify the people or cops around.

Nishant Priya and Shahzad Ahmad, two girls from the National Institue of Fashion Designing(NIFT), India designed this Anti-molestation Jacket. This is designed over the concept of the stun gun which works on the norm of momentarily shocking the person into a state of motionlessness by providing him with a low-voltage electric shock. What you have to do is to press a button embedded in your sleeve and this jacket will work as a huge stun gun. Pressing the button 5-6 times will immobilize the person for over 15-20 minutes, giving you a fair chance to escape from the sight.

SHE- The Society Harnessing Equipment, also known as the anti-rape underwear is designed in a way that it has a GPS as well as a mobile communication system harnessed in it. It includes pressure sensors and thus possesses the ability to shock a person for about 38 times whosoever attempts to touch a woman, by detecting the pinching and squeezing actions. Besides the shock mechanism, this underwear also alerts the police.

A South African Doctor, Dr Sonnet Ehlers invented these female condoms named ‘The Rape-Axe’. She explains it as a latex condom that needs to be inserted like a tampon. Whenever an attacker enters his male part inside this, the jagged rows of teeth-like hooks stab him. The person gets a fatal realization of what kind of brutal crime he was attempting. He won’t be able to remove the condom himself a will need complex surgery to get rid of this.

This anti-abuse device, The injector, is invented by Ira Sherman. She aimed at designing a device that would tag the attacker for his crime. So, it works in the way that whenever a woman wearing an injector is about to be getting raped or assaulted, the device will inject depressants into the attackers as well as the tattoo dye. This makes the rapist numb and he can easily be branded for his crime by identifying the ink.

The Anti-abusive device is one of the cruellest and most barbaric devices on the list. This is specifically meant for the cruellest attackers. Whenever they try to conduct the brutal act, this device senses the Tubular motion. With its spring-loaded stainless steel lasso and two very sharp prongs, it mutilates the attackers. So, anyone whosoever is thinking of taking advantage of a woman wearing Snear is risking unmanning/castrating himself.

This Anti-Abusive device is invented by a company named Robocopp. It looks small but this generates a very loud sound. It comes with a pin at the top. Whenever this pin is pulled off, it produces a sound of about 120 decibels. This sound is equivalent to the sound of an ambulance siren. This siren will keep on ringing for about 30 minutes or until the pin is put back in.

The Femdefence Tampon or the Killer Tampon was created by Jaap Haumann in the late 2000s. Looking at the rape incidents taking place in South Africa, this tampon was designed with a guillotine-like blade inside its hollow cylinder that is spring-loaded. Once, it is exposed to a man’s part, it can easily castrate a man. But, unfortunately, Jaap Haumann was criticized for his design and thus its sales never happened.

Wanna see the most stickiest attractions of America, The Bubble Gum Walls?

Bubblegums are like an all-time acquaintance of people in western countries. But the litter produced by these chewing gums is a very big problem...
Read more

First of all, I would like to discuss the disadvantages of lack of sleep.Have you ever thought about it-- I'm telling you - NOPE!It's...
Read more