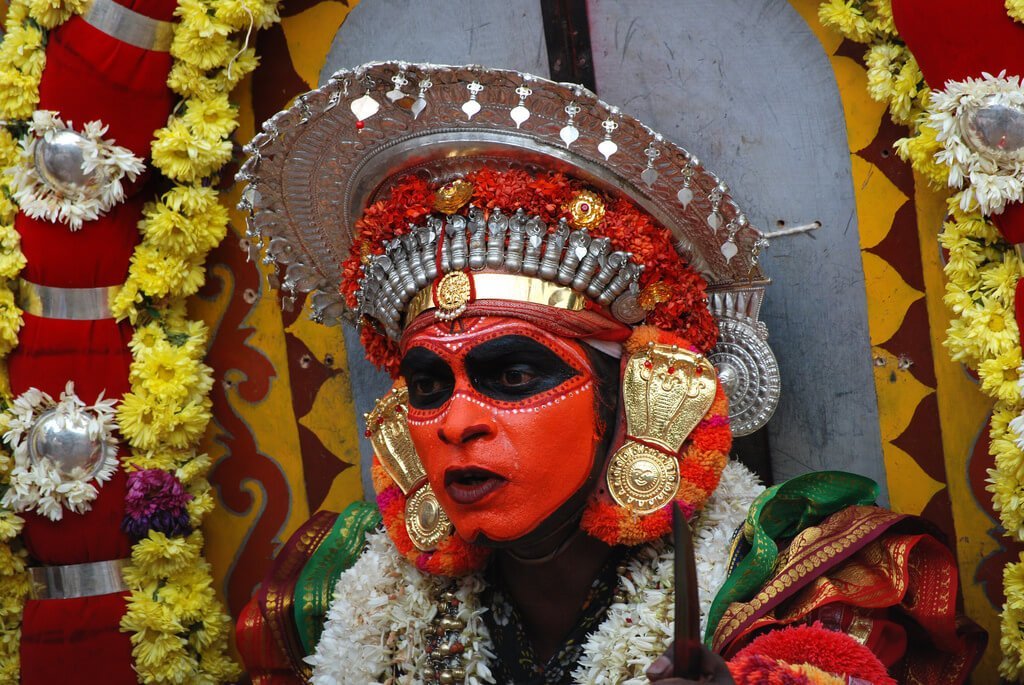 In the ancient world too, people believed that some of the Gods were too strict. However, pleasing them, brought a lot of prosperity and, on the other hand, hurting the sentiments of the God brought calamities. The above concept could still be seen in modern Indian believes which is shown in one of the rituals known as Bhoota Kola.

Bhoota means spirits and Kola mean “play” in Tulu language which is spoken in southern Karnataka. It is basically a spirit worship ritual celebrated by Tulu speaking people in southern Karnataka and some of the Kerala districts. According to these people, spirits are neither good nor bad. Each family has one spirit as their deity, and they do worship them annually by this ceremony. Kola is also called “nema” which means the ceremony. The hierarchy of the family heads sponsor these celebrations. They do believe that these spirits protect the village from calamities and make them prosperous and the anger of these souls could bring them bad luck. This is even similar to the African culture.

Read also: Get To Know About The Teeth Archer Of India

The Kola takes place in a pandal, where the deity’s idols cover one side, images and other objects of worship and the devotees comprise the other side. This ceremony goes from the dusk to dawn. It is actually a mixture or a complete package of literature, dance, and even theatrical elements. These Daivas or Bhoota or spirits are performed by professionals who belong to the lower castes of the society. They have experience in conducting Kola and are dedicated. They are paid for it too. The scheduled tribes’ people who invoke the Bhoota or spirit, is dressed in a very different costume and with a different makeup.

They dance thinking themselves as the spirits. It is believed that a soul actually enters the dancer’s body for a fraction of seconds which gives the performer the energy to perform till the dawn. They can foresee the future at that time. There will be singers with their instruments who will narrate the story of the spirit and its origin. These narrations have nowadays being sung to the tunes of the movie songs which makes it more pleasant. There are dances done by the invoker. Then there are role plays of incidents and all this goes on until dawn. It is said that these scheduled tribes who acts as the invoker may give boon or bane and can even expect any type of service from the family to keep the spirit calm and benevolent.

Read also: Do You Know About This Famous Man And His Long Name?

Costumes, makeup, and their preparations

The pandal is beautifully decorated with a variety of flora. The deity has to be placed in the shrine which is to be decorated with the plantain and coconut leaves and flowers. It also contains an altar made by the coconut palm leaves and tender banana plants. The performer of the Daiva or Bhoota or Bhuta usually wears a skirt of tender palm leaves which is easily flammable, which helps them to perform acts using fire. The person is also made to bath in plant extracts which will purify him before he acts as a spirit. The makeup done is also unique.

The spirits and folk deities worshiped and the dances performed in Kola can be classified into the following categories:

Being in the 21st century and hearing about these rituals, which are still in practice is hard to believe. This is still one of the central rituals of the Tulu-speaking community people. With the various changes in the economy like globalization and all other things, even these routines are being modified in many ways like the narrations are turned into songs by adding tunes. So will this ritual continue or not will only be decided with the passage of the time and mentality of the people of these particular communities.

Mindful Eating is the Best Way to Keep Yourself, Hale and Hearty When it comes to avoiding binge-eating, the most crucial factor is to eat...
Read more

7 Things You Should Know Before Botox Injections

Botox Injections are a popular way to reduce wrinkles and lines on the forehead, around the mouth, and between the eyes. Before any Botox...
Read more

Winter is Coming! Are you ready for Winter? A lot of things will change in the Winter. Now you can't wear shorts and t-shorts...
Read more

One of the most significant factors that can be an indicator of overall health is your diet. What foods do you consume regularly and...
Read more
Previous article
The Myths And Superstitions About Birthmarks
Next article
Why Do People Make A Wish On Their Birthdays?