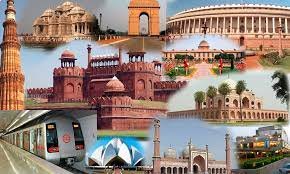 Delhi is a state that many invaders and emperors have ruled throughout history. Now it is the capital of India and a widely visited state by many tourists. The state has grown over the coming years and is the house of the most unique monuments across India. Listed below are places that you must stop by if you are visiting Delhi for the first time –

The Red Fort or Lal Qila is the most historic fort in Delhi, India. The name of the fort is red because of its colour. The fort was declared a UNESCO World Heritage site in the year 2007. The first Independence Day speech by the first Prime Minister of India, Jawaharlal Nehru, was given at the red fort. The architecture style of the fort is a mix of Mughal and Persian traditions. The place receives huge tourist footfall from all over the globe every day.

India Gate was formerly known as the All India War memorial. The memorial was made for the sacrifice of Indian soldiers who lost their lives between the years 1914 and 1919. The monument architect was Sir Edwin Lutyens, who designed several other war memorials. Visitors in Delhi can visit the monument any time of the day, but it looks stunning at night with lights on.

Qutub Minar is a massive minaret made of bricks that is 72.5 meters tall. It was built by Qutub-ud-Din Aibak in the year 1193. The minaret has a mix of Persian, Afghan and Mughal architecture. Visitors of Delhi were earlier allowed to enter the minaret, which has around 379 steps inside. The sandstone walls of the minaret have verses of the holy Quran carved on them.

Gurdwara Bangla Sahib is situated in Connaught Place in New Delhi. It is the most prominent Sikh worship house or Sikh gurudwara in the world. The place is also famous for langars which are prepared by the volunteers who work there. In langar, vegetarian meals are served free to anyone irrespective of their religion, age, gender, economic status, ethnicity or caste.

The Lotus Temple has a beautiful white open flower-like architecture. The monument has won several awards for its stunning architectural design. It is one of the most visited monuments in not just India but in the whole world. Unlike other temples, it has no religious pictures, religious symbols and no idols. The monument stands for the principle of the oneness of humankind.

Humayun’s Tomb was declared a UNESCO World Heritage site in the year 1993. The monument has very similar looks and designs to the Taj Mahal in Agra. The monument was built as a memorial by Haji Begam, wife of Humayun. The structure looks mesmerising at nighttime when it is illuminated with lights.

Jama Masjid in Delhi is the second-largest mosque in India. Shah Jahan built this mosque, and it was regarded as a symbol of Islamic power across India during the ancient era. The monument is surrounded by the famous Chandni chowk and Meena Bazaar. On Major festivals like Eid, the mosque is filled with people to offer prayers.

The Rashtrapati Bhavan, or the President’s palace, is the official residence of the President of India. The area of the place is 130 hectares, making it the largest residence of any head of the state in the world. The Bhavan consists of four floors and 340 rooms. It also has Mughal gardens, halls and offices that are used for important functions.

The meaning of the name Jantar Mantar is an instrument for measuring the harmony of the heavens. The place consists of 13 different architectural astronomy instruments. The place helps compile the astronomical tables and predict the moon, sun, and other planets in the solar system.

The National Rail Museum displays the history of rail transportation in India. If you are a train lover, you will love the enormous exhibition of vintage trains, old carriages and authentic locomotives. The most famous trains are the 1855 Fairy Queen, the oldest functioning steam engine in the whole world and the private saloon of Maharaja of Mysore from time back to 1899. A train ride inside takes the visitors for a ride around the whole site.

Delhi is indeed the heart of India! We hope you enjoy the grandeur of this city.

Psychology has always left us transfixed with its revelations. Until introduced to this science, who'd have ever thought that the color of your favorite...
Read more

5 Activities Guys should try before they Turn 30

There are two types of people: those who think that turning thirty is awesome and they can’t wait to settle down with their significant...
Read more

The Salt Cathedral of Zipaquirá is a roman catholic church which has been built 200 meters underground, in the tunnels of a rock salt mountain...
Read more

Sex chat with strangers can be an exciting and interesting experience. It's a great way to explore your fantasies, broaden your knowledge, and learn...
Read more
Previous article
15 Ways To Handle Anxiety Disorder
Next article
Why Community Care May Be Your Ideal Aged Care Solution

5 Ways to Stay Well in Change of Seasons