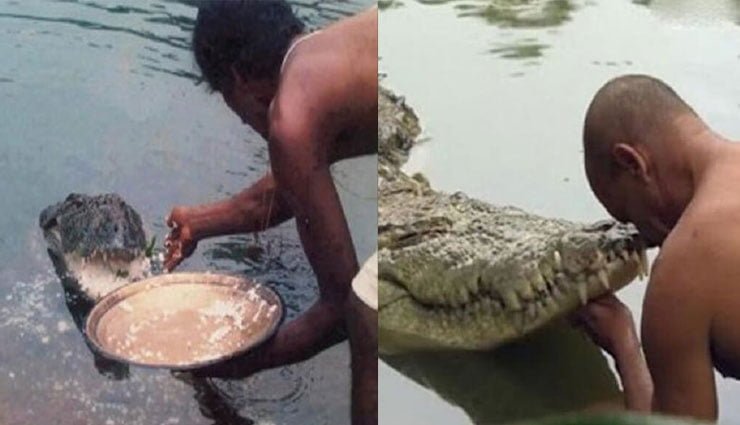 Does a vegetarian crocodile really exist?

To most of us, probably the answer would be no! For the above question because the question itself creates a lot of curiosity and questions in the mind, such as, an animal like a crocodile who eats its prey in a minute, how can it be called a vegetarian crocodile? Also, being vegetarian means this dangerous crocodile is not harming anyone, how could that be possible? Another question that zooms into is that how a crocodile can be a guard of someplace? Coming off these kinds of questions are very natural. Though its hard to believe, this is a big reality. And this reality exists in India, a country which is full of marvelous and mysterious stories that are hidden in its every corner.

A vegetarian crocodile as a guardian of a temple

One such example of a story is the story of a vegetarian crocodile who guards a temple, name, Ananthapura lake temple in Kerala. It is devoted to Lord Vishnu. The past history of the temple is still unclear but there are some legends attached to it.

Among them, the first legend says that the crocodile’s name is Babiya. She is the guardian of the temple since ancient times. It is believed that the crocodile is vegetarian and only eats the temple Prashad( made up of rice and jaggery) offered by the pandits and devotees. These devotees directly feed the Babiya by putting the Prashad into her mouth. Even devotees take bath into the lake and she does not harm anyone till date. Not only this she doesn’t harm fishes also.  According to the locals and temple pandits, “ Babiya is the real guardian of the temple and a ‘messenger of Lord Vishnu’”

Second Legend behind it:-

Another interesting legend says that once a great brahmin sage Sree Vilvamangalathu Swami was doing penance at this place. Then one day Lord Krishna in the form of a little boy appeared and started disturbing him. Swami was annoyed by his pranks and pushed the boy violently. Then boy immediately vanished into a nearby cave. Soon Swami realized that the boy was none other than Lord Krishna himself. The cave where that boy disappeared was still there near the temple. And since then Babiya guards the cave and the temple.

Another tale suggests that, when British soldiers were there in India, in 1945, one soldier shot dead the crocodile. A few days later, due to a snake-bite, that soldier died. Locals believed that soldier was punished by the serpent God Anantha. Soon after this, another crocodile appeared in the lake. It is believed that whenever one crocodile dies, another appears soon in the lake.

Every year many devotees visit the temple to see this magnificent guardian crocodile and give great respect to her. I think, for once everyone should visit this fascinating temple.

Read Also – What Are The Various Benefits Of Silver?

Body shaming is something that a lot of females throughout the world suffer. They are shamed for their physical appearance. The world decides to...
Read more

Have you ever noticed that after shaking your head like a rockstar, you would face a severe headache after some time? Ever wonder why...
Read more

Personal development plan, abbreviated as PDP, is a paper that a contemporary person will sooner or later need to write. This will be needed...
Read more

A good backpack will complement your looks. However, other than the design, there are a couple of factors you need to consider, especially when...
Read more
Previous articleUnexplored Wilderness of the North East which will Blow Your Mind
Next articleNikola Tesla : The Visionary Genius who Created The Future

Bizarre Phobias All Millennials Can Relate To