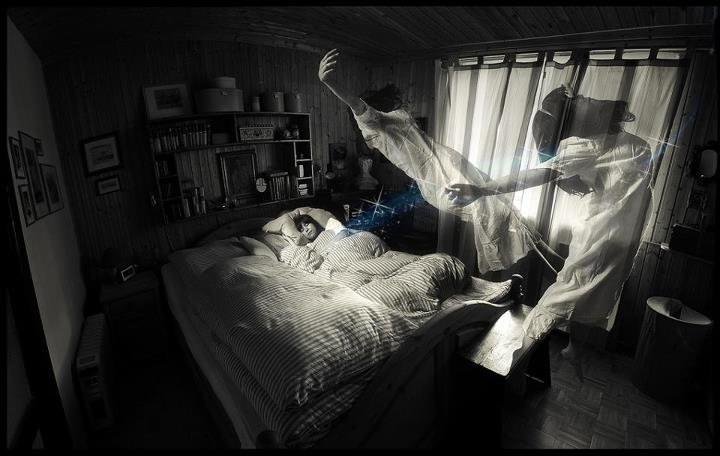 Have you ever gone to sleep, only to wake up looking down at yourself on the bed? Mindlessly drifted off during a peaceful Yoga session? Dreamt that you were consciously flying around in your own room able to touch the freshly painted ceiling? Well, don’t write off these incidents as hallucinations or weird dreams. They could be examples of Astral Projection.

Every Individual possesses an Astral body along with the Physical body in which we perform our mundane tasks of eating, sleeping, walking, and socialising with others. The Astral body, on the other hand, comes into action when the physical body is at rest or in a peaceful state. It is in such a situation that a person Astrally projects. In more specific terms it could be said that an Astral projection is an ‘Out of body experience’. It takes place usually when a person is asleep, under hypnosis, deep meditation, or upon higher awakening.

Experienced travellers describe it as an experience where the Astral body or Spirit leaves the Physical body and travels to a separate Realm or Dimension. A silver Umbilical type of cord attaches the Astral body to the Physical one, as has been reported by various Astral Projectors.

The Human body is a storehouse of several types of Energy. The Astral body is the closest Energy form to the Physical body. It detaches itself during sleep or meditation and allows a person to travel to any place they desire. The Astral plane or the Spirit Realm as it is referred to be is different for every Individual. Some people come across horrific environments, while others find themselves in more pleasant settings. There are no laws of the Earth applicable in such Dimensions.

Floating and flying are easy feats for experienced travellers. Space and time do not exist on the astral plane. What may seem like months or even years to a projector may, in reality, be only a few hours on the Earthly plane. Also though it seems like a rare phenomenon, the Astral projection is actually very common. 5-10% of the World’s population has astrally projected at least once in their life.

The history of Astral Projection began long ago when the people who had travelled to Asia and Africa reported the knowledge of a belief. It said that even after a body has been disposed of, the soul can continue its existence in another body. This gave the spiritual gurus the idea that there could be a way to detach the soul from the body and travel to other Realms, in search of Wisdom and learning. Almost in all cultures can a similar belief be found. This gave birth to the concept of Astral Projection.

Ancient Mythology dating back to the Egyptians also show signs of belief in such a notion. The ancient Egyptian Mystics believed that there existed a part of the soul called ‘Kha’ or ‘ka’, which floated above the physical form of a person while asleep. The ‘kha’ could partially or completely be visible to other people. Out of body experiences were considered an ideal part of an Egyptians life and can be seen in the artworks found in many temples. Many Buddhist Schools also taught people ‘dream Yoga’ which was said to teach a person how to develop consciousness or Awareness during the day, to be consciously awake during sleep.

Scientifically there has been no recorded evidence of the existence of Astral Projection. Scientists do not accept the idea that consciousness and awareness can exist outside the brain. They believe that a person is dreaming.

One of the various techniques to Astrally Project is the Psycho soma Stretching Technique. The key is to get comfortable in a relaxed position preferably in a place where one cannot be disturbed. Closing their eyes the projector must concentrate on their body. The second step is to focus on one part of the body, for example, the hand. The projector must command the Astral body to move a couple of inches away from the physical body. This stretching exercise should be attentively focused upon. The Astral hand should then be consciously brought back to the Physical side. This process must be patiently practised as many times as possible until the projector feels something. Novices report that their hand starts feeling larger. This process can then be repeated with other parts of the body which will eventually lead to the entire Astral body getting detached from the Physical one.

Many of India’s oldest epics and book give us accounts of how Indians have been one of the most progressive civilizations back in the...
Read more

How Roman Used Human Urine And Feces In Daily Life

Myth Behind Why Pencils Are Yellow In Color.

Pencils have been painted yellow as far back as the 1890s. What's more, that brilliant shading isn't to make sure you can discover them...
Read more

Although house flipping has proven to be a highly profitable venture for countless investors, it’s pure folly to assume that every flip will be...
Read more
Previous articleYou Need To Be Ridiculously Rich If You Want To Own Any Of These Paintings
Next articleTop 14 Mind-Blowing Myths Vs Facts