Around The World In 8 Unusual Pizza Toppings 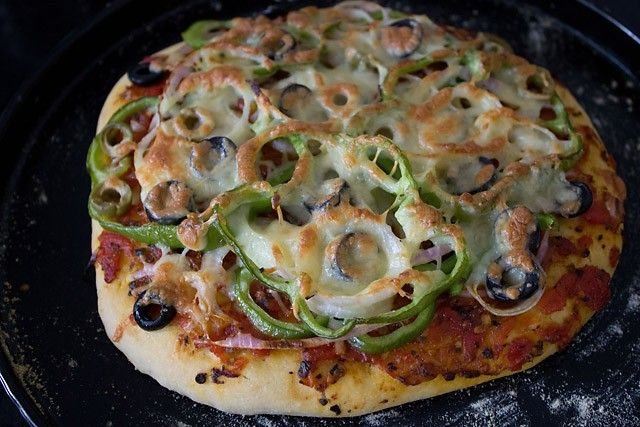 Quite possibly, the hardest challenge in the world would be for someone to keep their hands off a slice of pizza. Am I right or am I right?

Pizza has been a favorite for ages now. Even Pope Francis once got his pizza hand-delivered from a local pizzeria in Italy. The first appearance of the term ‘pizza’ dates back to 997 A.D., and modern pizza has its origins in 18th-century Naples, Italy. The first American pizzeria opened in 1905 in New York City. With chains like Domino’s expanding to over 72 countries, American-style pizzas have global reach.

The cheesy, decadent, and spicy Italian dish comes with a variety of toppings that one has the liberty to choose from. Apart from the usual toppings like meat, veggies, olives, and jalapeños, there is a multitude of atypical toppings that people like on their pizzas.

Here’s a curated list of 8 such bizarre and unusual pizza toppings:

Yeah, you read that right. This tropical summer fruit finds its way to the top of a pizza in Guimaras Island of the Philippines. A specialty of the Pitstop Restaurant is mango delicacies and its menu also features mango spaghetti. It is served with green bell peppers, cheese, cashew nuts, chili sauce, and, of course, mango slices. Want to know more about restaurant: click here

Listed as one of the classic pizzas in menus of Sweden, this pizza features whole grain tortilla bread, spicy tomato salsa sauce mixed with a unique curry powder, light mozzarella cheese, sliced banana and a few chopped walnuts. Some places even add chicken.

Yes, the world-famous Japanese dish is used as decor for pizza. Originating in Canada, it uses a slightly crispy yet chewy fried rice patty as the base and is topped with a layer of sliced avocado, a layer of sliced salmon, tuna or crab meat, a drizzle of mayonnaise, and wasabi powder.

The oldest licensed pub in Sydney called the Australia Heritage Hotel, serves some delicious Australian dishes with a twist. The in-house special pizzas are Pepper Kangaroo Pizza and the Saltwater Crocodile Pizza. Marinated in native peppers and served with roasted capsicums and native berries, the Kangaroo pizza has a slightly sour/sweet flavor combination which complements the kangaroo meat. The Saltwater Crocodile Pizza is made with Thai herbs and spicy coconut cream. Want to know more about restaurant:  hclick here

Known as the ‘Thunfisch Pizza’, this pizza is so famous in Germany that it can even be ordered at pizzerias like Dominoes and Pizza Hut. Seafood pizza also makes a feature in Russian menus where they top it with mackerel, salmon, and sardines.

What is better than having pizza for breakfast? Topped with breakfast ingredients like bacon and spinach, poached eggs, avocados and potatoes, these unusual pizza toppings might be a newer invention, but they are definitely scrumptious. The fried egg pizza is most common in France. The egg is served yolk up. Sometimes it’s baked on top of the pizza, and sometimes it’s fried separately to be added later. Either way, it’s a fried egg pizza.

It might look like shredded cheese but is actually coconut. It is consistently one of the favorite unusual pizza toppings in Costa Rica along with shrimp.

Japan is known typically for its unusual pizza toppings. Eel is one of them. It is usually baked or fried before being used in a pizza. Other cringe-worthy Japanese toppings that might not be your first choice are squid ink, Shira ko (cod milt or fish sperm), and mayonnaise.

Change is an inevitable part of our life; as they say. And everything that has to improve requires change. This is what we often miss...
Read more

The distance from Mysore to the romantic hill station of Madikeri is 120km. It is a very beautiful valley surrounded by plantations of coffee...
Read more

Big events need strategic planning for smooth implementation. Weddings are one such event which could go awfully wrong if not planned well. Patient analysis...
Read more

Mukbang and ASMR eating has been the ongoing trend of this "new generation," which is usually on the phone screen, scrolling through social media...
Read more
Previous article
How The World’s Most Expensive Coffee Is Made From Cat Poop!
Next article
This Rescued Blind Owl That Holds The Universe In Its Eyes!

What Type Of Faucet Is Best?