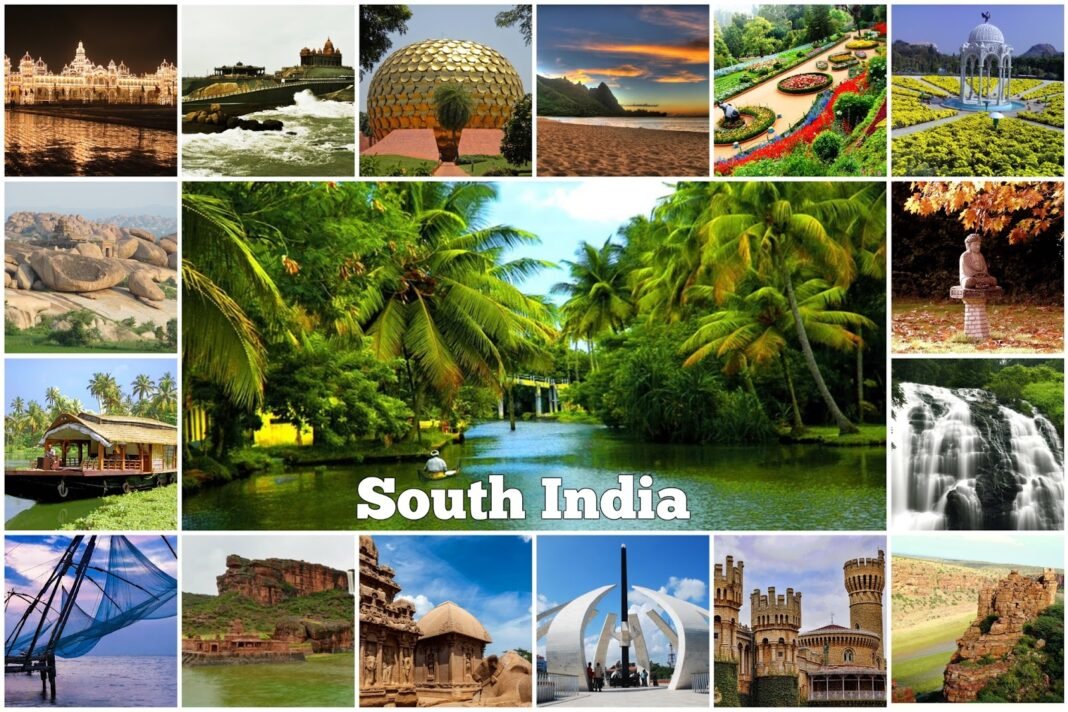 If you plan to visit South India for the first time, you should check out these gorgeous places listed below!

Munnar is one of the most popular and beautiful hill stations situated in South India. The hill station is located 1,600 meters above sea level. The place is aptly called The Kashmir of South India for its breathtaking beauty. Munnar is filled with lush green carpets of tea plantations across terraced hills. It also has the famous Tata Tea museum established in 2005 to share the legacy of hardworking tea planters and give the visitors insight into how the tea is processed. Other popular attractions include Salim Ali Bird Sanctuary and Eravikulam National Park.

Ooty is also known as Udagamandalam; it is a small hill station town located in the Nilgiris Hills. Ooty has the most extensive rose garden named The Government Rose Garden in India. The garden is situated at an altitude of 2200 meters. It has more than 20,000 roses, including the hybrid tea roses, Ramblers, Floribunda, and roses in unusual colours like green and black. Other attractions include the Nilgiri Mountain Railway, Stone House, St Stephen’s Church, and The Ooty Tea factory.

Alleppey is also known as Alappuzha. The Alleppey backwaters are the most popular tourist attraction across the globe, located in our very own South India. Different houseboats sail across the backwaters that can be rented by the tourist hourly, overnight, or for a day. There is also an annual boat race held during the festival of Onam. Alleppey is also famous for relaxing Ayurvedic resorts and homestays.

Coorg is also known as Kodagu, and it is a hill station famous for its coffee plantations. The place is filled with beautiful green hills and unique cultures. Coorg has the famous Abbey Falls, which has a hanging bridge constructed just opposite the waterfall. Talakeveri is a holy place for Hindus as it is the place where the river Kaveri originated. Other popular attractions in Coorg are the Iruppu Falls, Tibetan Buddhist Golden Temple, and Nagarahole National Park.

Mysore is a city in South India that is famous for the tourism and IT industry. Mysore is also known as the ‘City of Palaces’ as it has seven palaces. The most famous tourist attraction in Mysore is the historical Mysore Palace. The palace is located in the centre of Mysore and is the residence of the Wadiyar dynasty. More than 6 million tourists annually visit this palace. The architecture style of the palace is a blend of Rajput, Hindu, Mughal, and Gothic styles.

Kasaragod is a town filled with green hills, beaches, forts, and coconut trees. The Bekal Fort is the largest fort in Kerala that is situated just next to the seashore. The Bela Church is the oldest and the most beautiful in Kasaragod. It was built in 1890 and had gorgeous gothic-style architecture. Other tourist attractions include the Hosdurg Fort, Govinda Pai Memorial, Edneer Mutt, and Chandragiri Fort.

Hampi is situated on the banks of the Tungabhadra river, and it is a UNESCO World Heritage Site. The place is also called The Temple Town because it has remains of ancient rocky temple structures. The area has famous tourist attractions like Nandi Statue, Vithala Temple, and Virupaksha Temple. The best time to visit Hampi is during a 3-day long festival held around October – November annually.

Coimbatore is the second-largest city in Tamil Nadu. It is popularly known as the Manchester of South India and the Textile Capital of the South. The town is located on the bank of the Noyyal River and surrounded by the Western Ghats. The place is famous for broad ghats, beautiful waterfalls, and lush green hills. Popular tourist attractions include the Kovai Coutralam, Valparai Hill station, and Aliyar Dam.

Vishakapatnam is also known as Vizag. The town is popular for its beautiful beaches and green hills. There are many beaches to explore, like Rushikonda Beach, RK Beach, Bheemili Beach, Yarada Beach, and Appikonda Beach. The RK beach is most visited during  New Years’ as the annual beach festival is head. The Appikonda Beach has its yearly beach festival on the Mahashivratri. Other tourist attractions include Visakha Museum, Araku Valley, and Submarine Museum.

Let us know if there are other places in South India that you would recommend to first-timers!

What Are Emotions? Emotions are biological conditions that are linked with the nervous system. Emotions play a significant role and have substantial clout on human...
Read more

Apple cider vinegar has a wide range of health benefits; it is full of antioxidants and has antimicrobial effects. It is a healthy and...
Read more

Let’s be honest -not all of us enjoy sweating it out at the gym. While some people are able to wake up at 6am...
Read more

Sex chat with strangers can be an exciting and interesting experience. It's a great way to explore your fantasies, broaden your knowledge, and learn...
Read more
Previous article
5 Dreamy Master Bedroom Ideas
Next article
15 Ways To Handle Anxiety Disorder