Shani Shingnapur – Where The Houses Don’t Have Doors 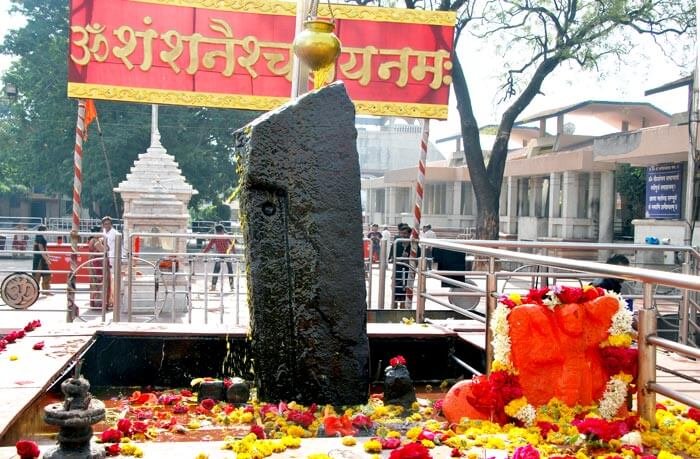 Shani Shingnapur is a small village in the district of Ahmednagar, in the state of Maharashtra. It’s hard to believe that even in this era when crime rates are increasing day by day, the houses in this village have no doors or locks.
The story as passed on from generation to generation says that many years ago, probably since the beginning of Kalyug (Age of downfall), the deity, Lord Shani self-emerged from the earth in the form of an imposing black stone. A group of shepherds found it. When one of them touched the rock with a pointed rod, the stone started bleeding. Word of this soon spread to the entire village, and everyone gathered around to see the miracle.

That very night, Lord Shani appeared in the dream of the most devoted shepherd in the village and told him that the black stone was his swayambhu form. When the shepherd offered to build a temple, Lord Shani declined to say the whole sky was his roof. He instructed the shepherd to do a pooja every day and Tailabhishek on Saturdays. He promised him that from now on he was going to protect the village and there would be no fear of thieves or dacoits.

Read also: All Weird Facts About Sneezing You Need To Know

Till date, this statue of Lord Shani, a five and a half feet high black rock is seen in the open yard without any roof. It is said that the temple is a ‘Jagrut Devasthan’ (alive temple) which means that the deity resides in the temple and protects the village and its people from burglars. To this day, most houses do not have doors. It is said that whoever attempts to steal, faces a horrible fate, like a long, painful physical illness or a mental illness, accidents, or something terrible happens to his family.

It is also said that in case of snakebite, the male member of the family, dressed in white, should do a pooja and pour water on the idol. This water is then given to the victim to drink who supposedly recovers within in a few minutes.
This temple gets thousands of visitors daily, more on Saturdays, Saturday being the favorite day of Lord Shani.

Changes in the last few years

Since the beginning, women were not allowed in the inner sanctum of the temple, but now according to the judgment passed by the Bombay high court, women are allowed.

Read also: Does Anyone Know Why Do We Ring A Bell In Temples?

A few cases of theft were reported in 2010-2011, making the people a little apprehensive. Some people started installing doors to their houses, but many people still believe in the power of Lord Shani and keep their homes open.
As times change, so do beliefs. As the literacy rate goes up, there is no room for blind faith. But still, there are people who have complete faith in Lord Shani, probably because they themselves have experienced his greatness.

Guess you have to see a miracle to believe it!

From fire to wheels in the history, to everything around us in our present, basically, it won't be wrong to say that Man is...
Read more

It's hard to imagine a cemetery or a gravesite without flowers. We have grown up seeing people placing flowers on graves, either in our...
Read more

Mukbang and ASMR eating has been the ongoing trend of this "new generation," which is usually on the phone screen, scrolling through social media...
Read more
Previous article
Top 5 Amazing Health Benefits Of Bermuda Grass Juice!
Next article
Here Are Some Timeless Wardrobe Choices That Will Never Fail You

Getting Into Exercise: 6 Tips For First-Time Fitness Moms