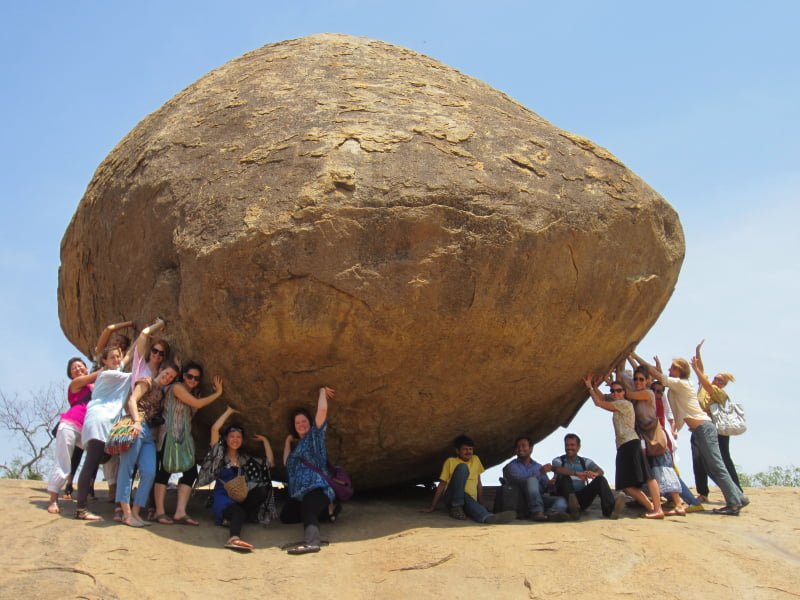 Krishna’s Butterball also called Vaan Irai Kal, which in Tamil means “Stone of the sky” and Krishna’s Gigantic Butterball. This is a great tourist’s attraction at Mahabalipuram, Chennai, purely a tourist town. People visit this place to see the magnificent rock carvings, temples, cave sanctuaries, giant open-air reliefs such as the renowned ‘Descent of the Ganges’, and the temple of Rivage, with thousands of sculptures to the glory of Shiva. This balancing rock is seemingly defying all the laws of physics. According to Hindu mythology, Little Krishna has an unsatisfying appetite for butter. And this rock boulder is believed to be the bolus of butter that Krishna would steal from the other houses.

A giant boulder of granite, frozen on a slight 45-degree inclination in the historical town of Mahabalipuram in India. The boulder is 6 meters in height with the width of 5 meters, weighing around 250 tons. It is balanced on an approximately 1.2-meter base on a slope and is said to be at the same place for 1200 years. It is listed as a historical monument by the Archaeological Survey of India. Mahabalipuram is a UNESCO World Heritage Site.

Read also: Did You Know About These Best World Heritage Sites In India?

In 1908, there was a rumour that the stone might fall, keeping in mind the safety of the people, then-governor of Madras, Arthur Havelock tried to move that boulder of rock with the help of seven elephants, but all goes in vain. Long ago Pallava king Narshimhavarman has also attempted to dislocate the rock, but he too didn’t succeed.

Once the South Indian king Raja Raja Chola was inspired by the balance of this massive rock boulder. This led to the creation of Tanjavur Bommai, a never falling mud dolls (image below) having a half-spherical base. Tends to return to its original position every time one tries to make it fall. The rock is half spherical as the part of it has been eroded. If we compare this rock, the boulder is bigger and heavier than the monolithic structures of Ollantaytambo and Machu Picchu of Peru.

The science behind this balancing sculpture is the centre of gravity and friction. Friction prevents the rock from rolling down. On the other hand, the centre of gravity allows the rock to balance on the small contact area. The rock’s awkward position and incredible balance make it quite famous. Local and tourists are attracted towards it as they can take whacky photographs by placing their hands on the stone. This looks as though they are holding it up.

Read also:  The Lands That Sank Into The Underwater Is Something That Can’t Be Forgotten

Game of Thrones (2011-) has now become a fictional world we all desire about being a part of! Words aren't enough to describe the...
Read more

Did You Know About These Bizarre Ways To Burn Calories?

God bless whoever thought of the idea of a supermarket! A one-stop shop is no less than a dream come true for the women...
Read more

Mukbang and ASMR eating has been the ongoing trend of this "new generation," which is usually on the phone screen, scrolling through social media...
Read more
Previous article
Did You Know That Lemons Are Man-Made And Pineapples Are Berries?
Next article
The Structural Framework Of The Human Body

5 Ways To Implement Mindfulness At Your Place