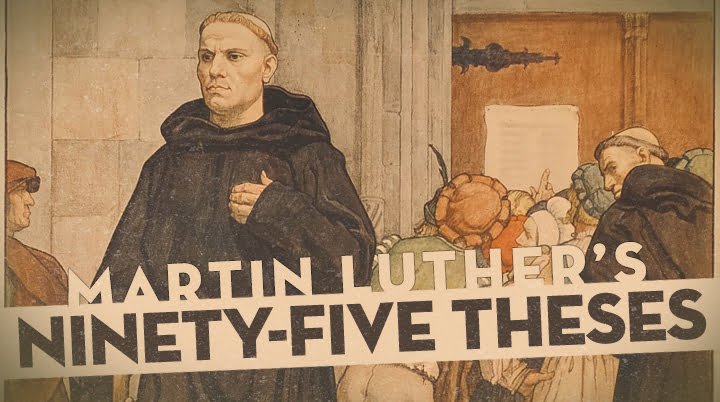 Martin Luther (1483–1546) born in Eisleben, Germany (previously known as Saxony). Luther’s father, Hans was a prosperous businessman and mother was named Margaretta. Martin Luther becomes one of the Western history’s most significant and most influential figures through his writings. One of them was his 95 theses.

In 1517, Luther penned a document – “95 theses”, a list of questions we debate, striking the Catholic Church’s corrupt practice of trading “indulgences.” Indulgence was a piece of paper or a certificate which ensures a direct entry of an individual to the heaven by reducing the time in purgatory. A donation or charity acknowledged the sale of indulgence. His theses were questioning rather than accusing. According to Catholic Churches, if you have committed sins then you have to first finish the atoning of your sins by crossing a kind of way station which is called purgatory. Then only you will be allowed to enter the heaven. These indulgences were sold by Pope Leo X to raise money for the renovation of St. Peter Basilica in Rome. At that time Luther was a professor of Theology at Wittenberg, and he was well acquainted with the financial transactions happening in the church in the name of the entry to heaven. This was not only the reason of Luther’s disagreement from the Catholic churches.

In addition to criticisms of indulgences, Luther also reflected renowned sentiment about the “St. Peter’s scandal” in 95 Theses:

Why does not the pope, whose wealth today is higher than the wealth of the richest Crassus, build the basilica of St. Peter with his own money rather than with the money of poor believers?

The invention of printing press in the middle of the 15th century and translation of Bible into the other vernacular languages led people to read Bible directly rather than listening to its molded version from the priests of churches. For the first time in the history, Bible was available outside the church, and hence anyone can read it without relying on the church. It was like unmediated and direct relation with the god.

Luther decided to question the teachings of Roman Catholic Church. Luther believed that the salvation is reached only by one’s own faith and by God’s grace, and not by buying indulgences from the corrupt church officials. He wants to emphasize the primacy of the holy book Bible rather than that of the Church officials. He nailed his 95 theses to the door of the Wittenberg Castle church, which propounded two central beliefs — one was that the Bible is the only central religious authority and other was that the humans could reach salvation only by their faith and not by their deeds. These theses spark the beginning of Protestant Reformation and religious reformation in the West. It was emerged and shaped by Luther’s ideas.

In 1518, Pope condemned the writings of the Luther as they were opposing their teachings. They found Luther to be Heretical and his writings to be “scandalous and offensive to pious ears”. In 1521, Pope Leo excommunicated Martin Luther from the Catholic Church, and an edict was passed ordering to burn Luther’s writings. Luther hid his work in Eisenach for one year and began to work on his major life project which took him ten years to complete.

Luther died on February 18, 1546. Luther is recalled as a controversial figure, not just because his writings led to significant religious reform and division, but also because of his later life where he took on radical positions on many other issues.

10 Places you Must visit when In Mumbai

Mumbai is indeed a city that never sleeps. It is the capital of Maharashtra and also the financial capital of the country, India. Mumbai...
Read more

Melbet Is The Best Sports Betting App For Phones And Tablets

Download the free Melbet client program to your Android, iOS device. Enjoy all the advantages of a modern program, place bets in the application...
Read more

Charles Babbage  (26 December 1791 – 18 October 1871) was an English polymath. A mathematician, philosopher, inventor and mechanical engineer, Babbage originated the concept of a...
Read more

One of the most significant factors that can be an indicator of overall health is your diet. What foods do you consume regularly and...
Read more
Previous article
Dermatologically Tested Tips To Help Your Skin Look Beautiful
Next article
Technologies In World War I