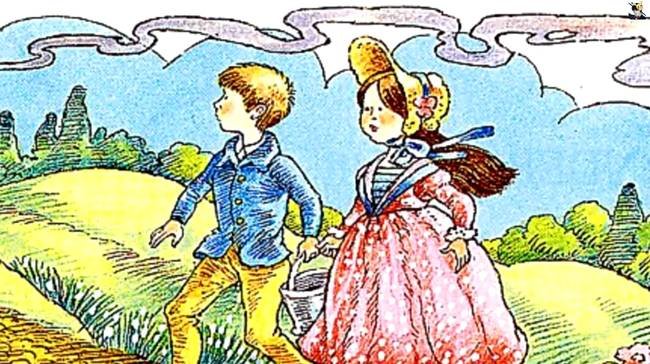 Origin of Jack and Jill Rhyme

Jack and Jill went up the hill

To fetch a pail of water.

Jack fell down and broke his crown

And Jill came tumbling after.

Such a beautiful nursery rhyme, isn’t it? But every literary work is deeply rooted in a historical ground.

And this easy to sing rhyme is no different! Many theorists believe that the Jack & Jill rhyme was based on the French Revolution.

The last two lines of the poem have been the subject of a lot of assumptions. And if we were to have a closer literary look at the French Revolution (1793), the first image that comes to our mind is King Louis XVI’s head on the guillotine.

Jack fell down… (King Louis XVI’s head was forced on the guillotine by the commoners) and broke his crown (With the head, the crown hit the ground as well, thereby ‘breaking’ into pieces). And Jill came tumbling after…(Remember Queen Mary Antoinette? She was the next to be beheaded. Her head ‘tumbled’ following Louis’ head).

This explanation fits the bill. Until we realize that the French Revolution took place in 1793… while the first printed version of the poem was found in 1765.

So, if the poem wasn’t based on the French Revolution, what was it all about?

The story is as follows: King Charles I tried to increase the taxes on liquid products to pile up more wealth in his treasury.

To assert his power, the King passed a rule that reduced the value of Jack (1/2 pint), but the taxes were just the same.

That meant that ½ pint of beer does not remain the same in volume, but the cost of the beer would be the same as before. This meant more tax and more wealth to the King’s treasury.

Thus the line: Jack fell down and broke his crown. Crown refers to the image of a crown on the beer glass.

‘Gill’ means ¼ pint. So, when Jack fell down, Jill came tumbling after. .. ‘Gill’ was later modified to ‘Jill’.

Jack & Jill isn’t just a nursery rhyme, it is a rhyming retelling of a dark historical past. How interesting does the nursery rhyme sound now?

What are your views on the origin of Jack and Jill rhyme? Let us know in the comments below.

Hawaii is known for its striking natural excellence, with the segregation of the islands bringing about a scene like no place else on earth....
Read more

In today’s world, various trends are ever changing. The most significant of these has been food trends in the last decade. We have witnessed...
Read more

These Toxic Habits Hold The Power To Damage You From Within

Toxic Habits - More Harmful Than Fatal Diseases! It is widely believed that nervousness and anxiety are serial killers, standing in the queue just behind...
Read more

Planning a wedding is an exciting time. You’ve probably been excitedly chatting about an abundance of ideas you’ve both has since the engagement, and...
Read more
Previous article
Have You Heard About The Baader-Meinhof Phenomenon Before?
Next article
Tsutomu Yamaguchi Is The Luckiest Person On Earth! Here’s Why…