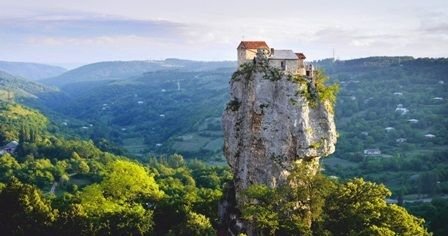 We have always heard or read about hermits lost in prayer on top of the Himalayas. Devoid of life’s pleasures and every other luxury, they strive to earn salvation. But all these are tales of the ancient, right? WRONG!

In this 21st century, there DOES exist a man who lives the life of an ascetic; living in a place that is literally closer to the seven Heavens. Before you think I am narrating just another fictional story, let me tell you that THIS IS TRUE!

After deciding upon his new place of abode, Maxime Qavtaradze had to sleep in an old fridge to shield against the weather. The 59-year-old monk makes a 20 minute descend via a ladder to pray at a small monastery. The ladder is not more than 131 feet high. He survives on the food delivered through a winch by his supporters on the ground. His nearest neighbour is the collection of 600-year-old bones of the last person who lived there.

Qavtaradze resides on top of the Katskhi Pillar. A natural monolith made of limestone, the Pillar is approximately 40m high. It is located at the village of Katskhi in western Georgian region of Imereti, near Chiatura. The rock overlooks the small river valley of Katskhura, a right affluent of the Q’virilla.

A peek into its history tells us that the Katskhi Pillar was the symbol of the God of fertility for the local population. After the advent of Christianity, a church was built on top of the rock.

The 18th-century Georgian scholar Prince Vakhushti first mentioned the Katskhi Pillar. He reports, “There is a rock within the ravine standing like a pillar, considerably high. There is a small church on top of the rock, but nobody is able to ascend it; nor know they how to do that.”

The Pillar remained unknown to the world until 1944 when a team of climbers ascended the monolith to find the ruins of the church. It was more deeply studied from 1999 to 2009. The ruins were of an early medieval hermitage from the 9th century.

The church of St. Maximus the Confessor is just one element of the Katskhi Pillar complex. It shares the space with a burial vault, a wine cellar and also, three hermit cells. The locals look up to the Pillar as the Pillar of Life and a symbol of the True Cross. A state-funded program has helped revive the monastery building by 2009. A chapel, named after the first Stylite, St. Simeon, lies at the base of the Pillar. Twice a week, the monk climbs down the ladder to pray here.

Maxime Qavtaradze, a native of Chiatura, shifted here in 1993, after taking monastic vows. Due to his arrival, religious activity started gaining speed by 1995. Also, he now has a cottage and a bed to sleep on. In addition, Qavtaradze feels closer to God. This has helped him forget his hideous past.

“When I was young I drank, sold drugs, everything,” he said. “When I ended up in prison I knew it was time for a change. I used to drink with friends in the hills around here and look up at this place, where land met the sky.” He also added, “We knew the monks had lived up there before and I felt great respect for them.”

Qavtaradze is keeping alive the ancient tradition of the Byzantine men called Stylites or Pillar Saints. These people have strong faith in the fact that temptations are done away with by residing atop pillars. These pillars are the best escape from worldly pleasures and provide scope for meditation. In Soviet times, Qavtaradze worked as a crane operator. So, he was never afraid of heights. He believes, “It is up here in the silence that you can feel God’s presence.”

The monk intends to remain at his present dwelling till his last breath. He wants his remains to be placed along with the relics of the last Stylite who lived there before him. At present, he utilizes his time to guide men who had a troubled past and aspire for a peaceful future.

Read Also – Want To Dine With The Dead? Then You Can Head Here!

Temples are the places where people find themselves closer to the God. Beautiful shrines across the world are God’s medium to depict power. People...
Read more

Relationship goals, squad goals, these goals, those goals, are quite common these days. One among these is mustache goals. Once puberty hit, all you...
Read more

Fixed Deposits (FDs) allow you to fully utilise Section 80C, which allows you to deduct Rs 1.5 lakh from your taxable income. It also...
Read more

A mommy makeover is a popular cosmetic surgery procedure that many women choose after pregnancy and childbirth to restore their pre-pregnancy body shape. The...
Read more
Previous article
Sudan: A Traveler’s Dream Lost In War
Next article
Its High Time These Laws Should Be Done Away With

7 Thoughtful Gifts for the New Mom in Your Life

6 Airports with Awesome Features Around the World

The Best Bedroom Decorating Trends in 2019