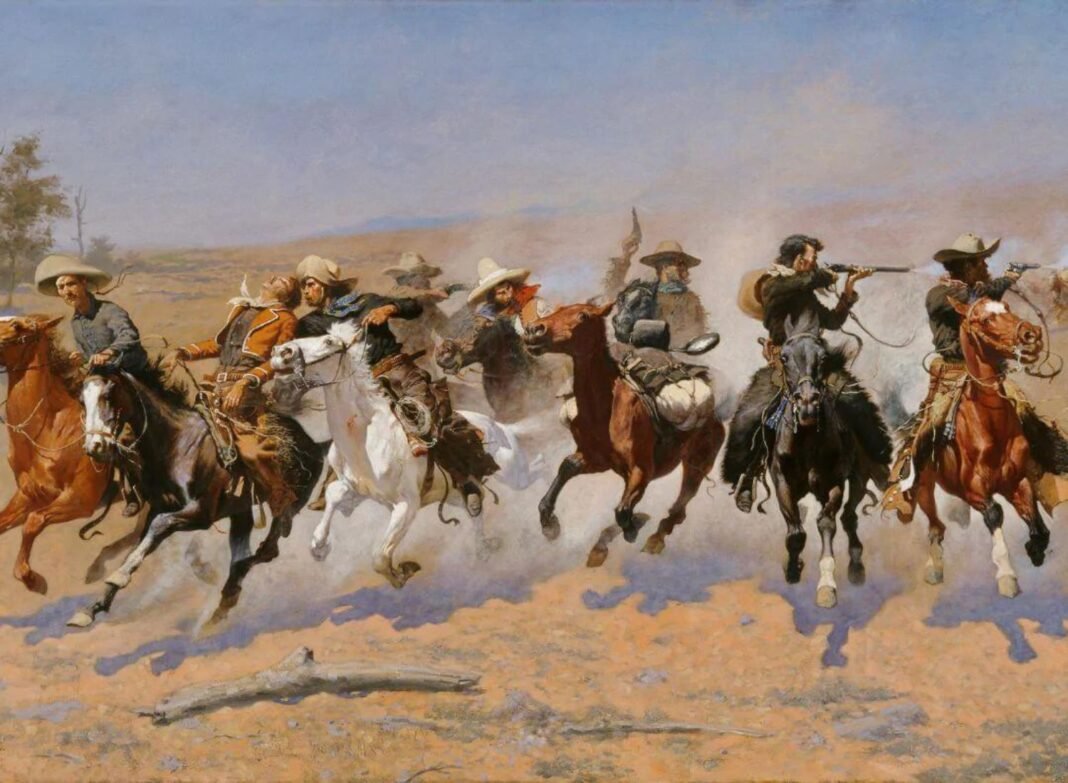 For art lovers of the Cowboys and Indians theme, there is no better painter out there than Frederic Remington. His iconic masterpieces depicting life during the American Wild West period are some of the most significant and historically accurate ever made.

As well as being a successful painter and illustrator, Remington was also an accomplished sculptor and novelist. Frederic Remington’s work differs from other painters because he lived the life depicted in his paintings.

Whether it was a painting of a life or death gunfight, a run-in with Indians, or simply a long trek across the American frontier, Remington had experienced it all. As a result, it is one of the best sources of Wild West history there is. Let’s look at five of the most famous Frederic Remington paintings that every art lover should know about.

As mentioned above, famous artist Frederic Remington actually spent many years working as a cowboy, rancher, and war chronicler. This hands-on experience granted him an intimate point of view of how life on the American frontier really was. He completed several military campaigns through California and Mexico and had built a name as a leading authority on the areas and their affairs.

The title of “the cowboy artist” was one the painter was very proud of, and there can be no denying that he loved his job. Traveling around America, chronically the various people, landscapes, and historical events, was a great joy for Remington. This joy of his work really comes through in his paintings.

The Lookout is one of the most iconic paintings in Remington’s entire painting collection. One of the most profound cowboy symbols is a lone soldier surveying the sweeping landscape around him. It perfectly symbolizes the soul of cowboy life and the nation’s heart during this time.

A Dash For The Timbers

When imaging images of the Wild West, the first thing that no doubt comes to mind is either epic gun fights or exhilarating chases on horseback. Frederic Remington’s gripping painting, A Dash for the Timbers, expertly combines the excitement of both scenes into one phenomenal painting.

This epic painting is like something straight out of a Hollywood blockbuster. The painting itself glorifies eight cowboys galloping in retreat as a gang of irate Indians are hot on their tails. The air is filled with smoke from the fire of the cowboy’s weapons as they attempt their daring escape.

This piece of Remington’s art is one of the paintings responsible for many of the Wild West movies that followed. Remington’s skill for portraying horses, one of his signatures, is also on show here, as each one has their own distinct character. This is one Remington painting art lovers should definitely check out.

Fight For The Waterhole

Life on the American frontier was difficult, and long life wasn’t guaranteed. So many things could kill a person trying to make the unforgiven land their home. These threats included dangerous animals, attacks from Native Americans and Bandits, or even just the ruthless landscape of the Wild West itself.

Frederic Remington’s renowned painting titled Fight for the Waterhole takes some of these all too real threats as the inspiration for the work. In the painting, a small group of cowboys is taking cover in a crevasse of a waterhole as they prepare their rifles to defend it.

Although Romanticist in its theme, the painting nevertheless showcases a real-life occurrence of life in the west. The cowboys are literally fighting for their survival, not just from attackers wanting the water for themselves, and the water also symbolizes survival in the harsh desert climate itself. The painting is a chilling reminder of people’s lengths to survive.

A large portion of Remington’s collection of paintings also consisted of work depicting the Indian tribes and their role in events. Remington’s authentic art of the Native American people and their customs shows that he respected their brave culture and was empathic to their plights.

Towards the end of his life, Remington dedicated dozens of paintings to showing the true complex Native American culture and not the image of them simply being the uncivilized brutes that the mainstream media depicted them to be.

Remington’s beautiful rendition of The Buffalo Hunt is one of the best examples of him depicting the Native Americans in a positive light. Their courage and bravery as warriors are almost superhuman here as they attempt to take down a muscle-bound buffalo with little more than their primitive weapons.

As Remington aged, his fascination and respect for the native people increased, at least from an artistic standpoint. As a result, he spent more and more time commemorating works of art to the unique lifestyles and varying cultures of the Native American tribes.

As a United States cavalry painter, he was present for several major military battles against the Natives. He even witnessed the massacre of Wounded Knee, which saw over 100 Native American women and children killed in the crossfire.

As a result, many of his Indian paintings are somber or take place at night. Ridden Down is perhaps the best symbol of the plight of the Indians. In the painting, a single native warrior looks on silently in the desert after the destruction of his tribe. Critics have praised the painting as a symbol of the death of the native way of life and the birth of the new age in America.

To Frederic Remington’s delight, being an artist was a hands-on and exciting occupation. His epic paintings are both a fitting tribute to life in the Wild West as well as being an excellent historical source also. These are just a few examples of his best artwork; there are so many more for art lovers to discover and enjoy.

For many horse racing fans, the only time that we are likely to watch the equine stars in action throughout their career is when...
Read more

Top 7 Unusually Weird Designs of Heels Heels only the word is enough to make a girl or woman happy or at least bring a...
Read more

One of the most significant factors that can be an indicator of overall health is your diet. What foods do you consume regularly and...
Read more

Although the Marvelbet India betting platform has only been around since 2017 and was created for fans of casino games, the platform currently has...
Read more
Previous article
How much does a mommy makeover cost?

The Key to Making Your Home Workouts not Boring