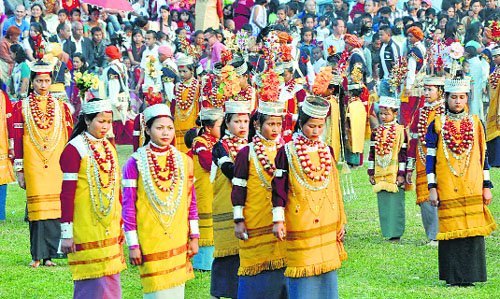 We all know that in almost all of India the society in nature is Patriarchal. Even most state governments follow the patriarchal form of inheritance. People in our country have since a long time given first preference to male heirs and male family heads. This is not a surprising or unknown fact but it would be highly inappropriate to say that all of the Indian states have such mindsets.

Even in today’s time there survives and thrives a society that believes and follows the mindset of Matriarchy. This Matriarchal society of India is found in the North-Eastern region of the Garo-Khasi-Jaintia Tribes. States such as Meghalaya even has separate laws of land inheritance that only allows the daughter to inherit.

Even in today’s time there survives and thrives a society that believes and follows the mindset of Matriarchy. This Matriarchal community of India is found in the North-Eastern region of the Garo-Khasi-Jaintia Tribes. States such as Meghalaya even has separate laws of land inheritance that only allows the daughter to inherit.

The Garo’s are the indigenous people of Meghalaya, Nagaland, and Assam. They call themselves A-chik Mande literally meaning “hill people”. It is the second largest tribe in Meghalaya after the Khasi and comprises of third of the local population. They are also one of the last surviving matrilineal societies in the world as the individuals take their clan titles from their mothers. Traditionally, the youngest daughter aka nokmechik inherits the property from her mother. The Sons in the family have to leave the parent’s house at puberty and later train in the village Bachelor Dormitory (nokpante).  After marriage, the husband has to live in the wife’s home.

The Garo society is only matrilinear not matriarchal. The men still govern the community and domestic affairs even if the women own the property. The property ownership acts as a security blanket for the Garo women. Christianity has greatly influenced the modern Garo culture.

This tribe is also indigenous to Meghalaya as well as Assam and few parts of Bangladesh. The Khasis call themselves the Ki Khun U Hynniewtrep which means “The Children of the Hut” in their language. They are famous for their design and building of the Living Root Bridge of Cherrapunjee region. They are also known for following the matrilineal system of descent because they feel that since it is the “woman are the ones who help continue the lineage of the family they deserve more shares to help run the households”!

The Jaintias or Pnar people of the North-East of India are also part of the society in Meghalaya that is matrilineal towards the working of society. In this tribe, the care of children is the responsibility of the mothers and mother-in-law and also holding the pivotal role of providing welfare for each member of the family while inheriting the ancestral property. Phew! So much work!

What is impressive to see is that the thought process of this matrilineal society is so socially advanced and gender equal! They allow women a lot of freedom same as men while still following acceptable social etiquettes!

Women in these tribes are allowed to have pre-marital sex and relationships while adultery is still punished. This gives the same acceptance and expectations of women like all other men in patriarchal societies. No preconceived ideas about body-purity whatsoever!

So, readers, I welcome you to leave comments and discuss this unique form of society at work.

“Sale!” Oh, what joy this word brings us! And not to forget the partial personality development associated with it. Focus, determination and speed are...
Read more

Selfies refer to self-portraits taken by oneself using a digital camera or a smartphone.  When taking a selfie, individuals can view how they look...
Read more

Hiking in the mountains is a wonderful kind of outdoor activity. It immerses you in the world of inspiring landscapes, gives you a great...
Read more

Your body is an incredibly complex machine. There are still plenty of secrets regarding how some parts work, and research into these things is...
Read more
Previous article
The Obscure History Of Three Most Famous Tongue Twisters
Next article
Ninjas and Geishas – The Truth Behind Japanese Cultural Icons

Pros And Cons Of A Ketogenic Diet