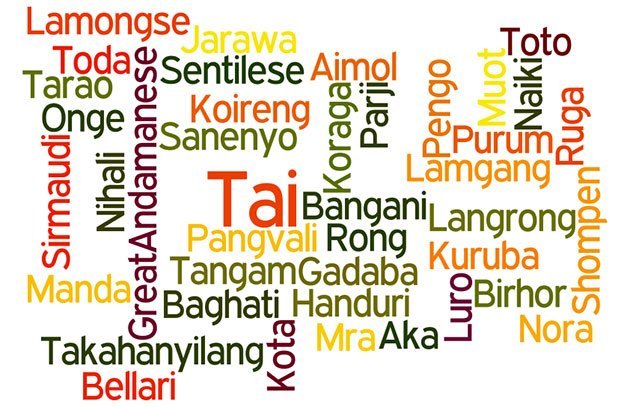 India is a country whose linguistic richness plays a key role in maintaining its social and cultural diversity.

As per the Census of India of 2001, India has 122 major languages and 1599 other languages. Unfortunately, many rich languages of India are on the verge of extinction. While the other 191 languages are classified as vulnerable, definitely, severely or critically endangered languages. Here are 8 Critically Endangered Languages from different corners of the country which need to be saved from extinction.

Aimol or Aimal is the language spoken by the Aimol tribe of Manipur, India. It has less than 3,000 speakers worldwide. Aimol is spoken primarily in the Chandel, Churachandpur and Senapati, districts of Manipur. Aimol is mutually intelligible with Kom.

As per reports, all the old Kuki languages, including Aimol, are merely dialects of the same language. There are almost no written records of this language. Younger generations have based their linguistics on the Latin script, while others have based it off of Manipuri written in Bengali script. As per 2001 census with 2,700 native speakers, Aimol language is critically endangered.

This language belongs to the Austro-Asiatic language family particularly to the South Munda subgroup of the Munda branch. With approximately 40,000 speakers, the Gutob language is considered to be critically endangered. The hydroelectric projects in the area have displaced Gutob people from their traditional villages.

Jarawa is a descendant of a parent language known as Proto-Andamanese. It belongs to the Organ language family. It is the language of the Jarawa tribe of the Andaman Islands, especially the hunter-gatherer communities.

The ancestors of the Jarawa are believed to be part of the first successful human migrations out of Africa. The Jarawas have no system of writing and only drawings and gestures are used as a means to communicate. Currently, with a population of only 270, the community, as well as the language, is a threat. Jarawa is an official language in India, specifically the Andaman Islands and is considered vulnerable.

With about 900 native speakers in the Nilgiri hills of Tamil Nadu state of India, Kota language is under threat due to the greater social status of the neighboring languages. It belongs to the Dravidian language and may have originated from Old Kannada and has a close relation with Toda language.

The origin of the name Kota is derived from the Dravida root word ‘Ko’ which means Mountain. It is spoken mainly by the tribal Kota people. The language is critically endangered with a Kota population of only 2500.

Recorded as Langrong by UNESCO, Ranglong language is also known as “Riam Chong”. It belongs to Sino- Tibetan language family and is a Kukish Kuki-Chan language of India and Burma. It is spoken in Northeast India in the region of Tripura, Assam, and Mizoram.

Ranglong language is a tonal, monosyllabic, contextual, agglutinative, and an ergative language. The Ranglong speakers as per G.A. Grierson in 1904 were 6266, in 2017. Ranglongs at present are about 15000 in number and the language has officially been declared as a critically endangered language.

Mahasu Pahari which is also known as Mahasui or Mahasuvi is a Western Pahari language mainly spoken in Himachal Pradesh. It is estimated that the speaking population is about 1,000,000 as per 2001 census. It is primarily used in home and for religious purposes.

The language has developed several dialects as per different locations. It is understood and spoken by people of vital age group. It is considered critically endangered as the number of people speaking it is constantly going down.

Nihali, also known as Nahali is a moribund language spoken in west-central India (in Madhya Pradesh and Maharashtra). It is a language of the Nihali tribal people of the region. It had approximately 2,000 speakers in 1991 out of an ethnic population of 5,000.

There are no other surviving monolingual speakers of the language making it a critically endangered language. Currently, people who are well versed in modern Nihali are likely to speak varieties of Hindi, Marathi or Korku as well.

There are many more languages which are critically endangered and vulnerable. In future, many more are going to join the list if proper preservative measures are not taken on time.

Read Also: Five Dead Languages you should Know about

Norway’s Tallest Ice-Cream Cone That Will Blow Your Mind.

Which tallest ice-cream cone did you eat lately?  Maybe a cornetto or a biscuit cone. It is very surprising to know that an ice-cream...
Read more

Anyone can fear anything. But really is it so? Means really the fear could be anything? Can it be a fear of Female and...
Read more

Do You Know About Australia’s Biological Warfare Against Rabbits?

Rabbits are by far one of the cutest and most cuddly animals around. But did you know that in Australia, wild rabbits are a...
Read more

Sex chat with strangers can be an exciting and interesting experience. It's a great way to explore your fantasies, broaden your knowledge, and learn...
Read more
Previous article
Kinds of Stuff You Can Legally Do In These 5 Nations!
Next article
How to Handle Protein Deficiency in a Vegetarian Diet?

7 Oils That Can Change Your Beauty Game

A Chronicle About Living With The Disorder ‘Albinism’