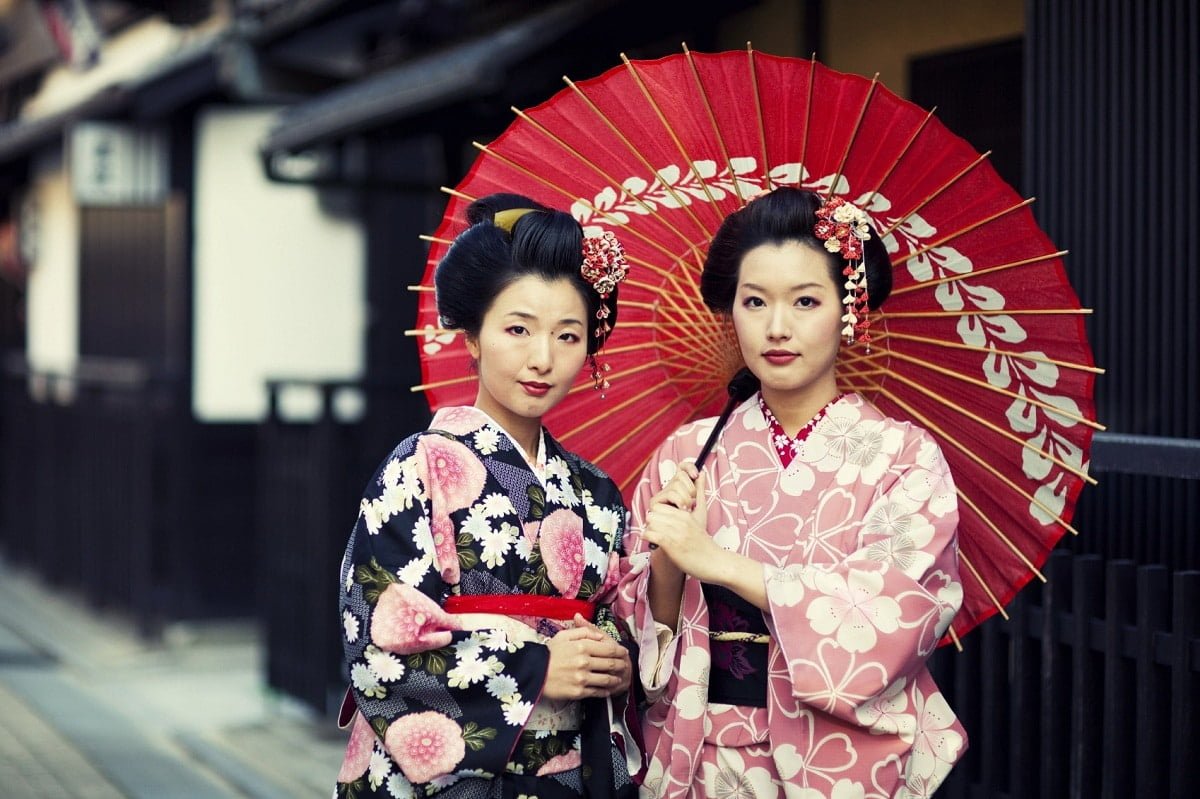 The tiny island nation of Japan has been a stronghold of popular culture since the early 1990s. Home to Pokémon, Nintendo, sushi, beauty regimes, bullet trains, stellar social manners and the ‘kawaii’ movement, Japanese entertainment, culture, fashion, and products form an important core of the modern international culture.

But before all this, two symbols of Japan epitomized widespread perception about the country. The dark and mysterious side of war and martial arts represented by Ninjas, and the stunning and artistic world of beauty and elegance represented by Geishas.

Much of what we think we know about ninjas come from legends and favorite stories rather than reality. The black clothes, samurai swords, shurikens, martial arts and control of natural elements are all mostly exaggerations. This does not mean, however, that ninjas had no skills. Originally called shinobi, ninjas were mercenaries and spies who specialized in espionage, guerrilla warfare, and infiltration. Very few were actually assassins or trained martial artists. The earliest shinobis existed around the 15th century during the Sengoku (Age of Warring) period. The samurais, another traditional class of Japanese warriors, had a stringent code of honor, which meant that they were not willing to fight dirty. Increasing conflicts between factions combined with social upheaval meant that elite nobles called Shoguns needed people who were ready to use tricks and deception to secure the victory. Ninjas were the answer.

Willing to commit deeds disreputable for traditional warriors, ninjas were terrorists, arsonists, scouts and surprise attackers. Rural areas were ninja strongholds, and they often dressed up as peasants (instead of in black pajamas) to blend in. Swords were the birthright of samurais, and ninjas mainly used a peasant sickle with a chain attached to it. Shurikens existed, but many historians believed that ninjas did not use them. In the remote areas of Iga and Koka, villages dedicated to the training of ninjas were eventually established. The breed of ninjas that emerged from these schools was the basis of legends – highly trained, and extremely deadly. They were trained in survival skills, teamwork, sabotage, disguises and martial arts.

Born and bred for war, the ninja community declined with the ushering of peace. When Japan finally united under the Tokugawa Shogunate in the 17th century, Ninjas faded into obscurity. So, how did spies and dishonorable troublemakers become legendary warriors?

Many of the myths and legends surrounding ninjas emerged from Japan itself. Thanks to their secretive ways, ninjas were said to have shapeshifting abilities, control over the five natural elements, the powers of invisibility and flight, and amazing martial art skills. Some such information was disseminated by ninjas, to instill fear and awe. In the Edo period (17th century), Japanese arts and literature flourished again, and many folklores starred ninjas. This cultural depiction continued even as the Edo regime crumbled to give way to the Meiji Restoration. These romantic stories became the basis of Western adaptations and native animes, and thus the fanciful characters today known as Ninjas became a part of popular perception. Storm shadow, Naruto, the Ninja Turtles, Psylocke, and Kasumi are all the products of history and reality embellished by fiction and imagination from both the East and the West.

When I was studying for my exams in the ninth grade, I stumbled upon a movie. Much later, I read the book it was based on. Though both The Memoirs of a Geisha and the film it inspired are problematic for their reasons, they remain among my favorites. This is mainly in part due to the matter of subject.

Read also: This Is The Secret Behind The Long Life Expectancy In Monaco And Japan!

Even today, some mistakenly believe that Geishas are glamorized prostitutes. They aren’t, but their history is rooted in the sale of sexual pleasures. Displaced by wars and fighting, the earliest geishas emerged around 600 BCE. While girls from the higher class served drinks and entertained people, the lower class women often had to resort to selling their bodies to make a living. This system remained unchanged until the 16th century when walled pleasure places were built within which these women resided. Some of them combined acting with prostitution, performing risqué dances, which also formed the basis of the theater form of Kabuki.

By 1800s, this changed. The gaudy and disreputable element of prostitution fell away as the society became more elegant and sophisticated. The modern geishas began to sell their skills, not their bodies. Their first circle became tea-houses, where elite men would escape from harsh reality into a world made beautiful by geishas. They sang, danced, poured drinks and facilitated conversation. Wages from tea-houses was their primary source of income, and occasionally geishas received patronage from rich men (Danna) in the form of money, kimonos, and gifts. In exchange, they provided companionship and facilitated socialization. Where wives were supposed to be modest, submissive and responsible, geishas were to be carefree, flirtatious and proudly display their skills. It might seem that the life of a geisha was ideal for its beauty and freedom, but this was not really the case.

Read also: Know Why This Japanese Soldier Continued To Fight Even After The War Ended?

Young girls were usually sold to okiyas or geisha houses. It was not uncommon for a poor peasant girl to turn into a celebrated entertainer. They started learning their skills from a very young age, undergoing rigorous training from mentors and teachers. They wore layered clothes, elaborate hairstyles and heavy makeup day in and day out, and walked the fine line between being provocative and vulgar. Still, many women, including geishas, consider the women-centric society to be very feminist.

Men had no role in the world of geishas- women ran everything. It was a way for girls to be independent and earn money, and geishas were the only class of women who could remain unmarried yet respectable. They chose their own clients, terms of a contract, and tea houses. Successful ones could even retire and live comfortably. Some married rich men are retired, as married women could not be geishas.

The Memoirs of a Geisha, the book I mentioned earlier, caused a great uproar in the karyukai (the flower and the willow world) of geishas as it spilled many of their secrets. The chief charm of the geisha world lies in its mysteries. It is an entirely separate world, detached from reality, where everything is beautiful and pleasant. Despite this, the world of geishas still remains so enchanting and alluring because the women hide behind their white masks, and only their skills are available for view, not their personal life.

Having survived the World War and allied invasion, the geisha world continues to thrive even today. Many geishas still entertain tourists in Japa and live successful lives. They have once again shed the prostitution associated with their name, caused due to women who dressed up like them to attract soldiers. Since their dubious origins way back in the seventh century, geishas have stood the test of time to become symbolic of Japanese, and even Asian, culture, art and heritage.

Did You Know About Kelly- The Smart Dolphin?

Humans aren’t the only intelligent being on Earth. Animals, too, can be surprisingly, and impressively intelligent. Frans de Waal, a primatologist at Emory University,...
Read more

The Connection Between Beauty And Self Enhancement.

They say "beauty is in the eyes of the beholder". Now, this saying might sound clichéd, but it's quite true. We often see and perceive...
Read more

People have always been considered about their looks and what they wear. What if someone will put restrictions on your dress up? Have you...
Read more

Sex chat with strangers can be an exciting and interesting experience. It's a great way to explore your fantasies, broaden your knowledge, and learn...
Read more
Previous article
One Of The Last Existing Indian Matrilineal Societies
Next article
The Funniest Sledging In Cricket: The Miandad-More Saga

Some Fun Facts You Need To Know About Animals

People From Chhattisgarh Love Their Red Ants Chutney. Would You Dare To Eat It?