Educating Children From The Back Of A Donkey 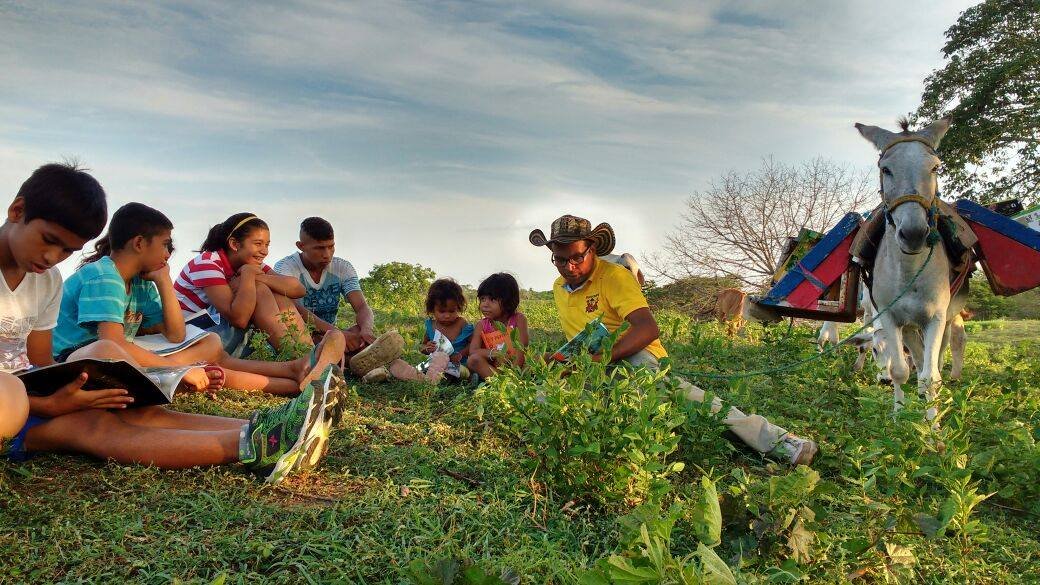 Table of Contents show
1 DO YOU KNOW A HERO?
2 ON THE ROAD WITH LUIS
3 IT’S NOT EASY TO TRAVEL THROUGH THE VALLEYS
4 LITERATURE IS HOW WE CONNECT THEM WITH THE WORLD
5 FOR THE LOVE OF BOOKS
6 Leave your vote

DO YOU KNOW A HERO?

To the unaccustomed eye, a man toting 120 books while riding a stubborn donkey would seem nothing short of a circus spectacle. But for hundreds of children in the rural villages of Colombia, Luis Soriano is far from a clown. He was an unemployed Spanish teacher in rural La Gloria Colombia Concerned that his students had no access to books at home, he decided to do something about it. Soriano developed the idea after witnessing the power reading had on his students, most of whom had lived through conflicts at a young age.

Starting in the late 1990s, Soriano traveled to communities in Colombia’s Caribbean hinterlands with a portable library. This began with 70 books.  With the help of his two donkeys, Alfa and Beto, Luis created a makeshift mobile library and set off to take his books to children who didn’t have access to reading materials. With that, the word ‘Biblioburro’ was born.

ON THE ROAD WITH LUIS

Teacher Luis Soriano takes books to remote areas of Colombia on the back of a donkey! “There was a time when many people thought that I was going crazy,” said Soriano. “They’d yell, ‘Carnival season is over.’ “I saw two unemployed donkeys at home and had the idea to use them in my biblioburro project because they can carry a heavy load,” Soriano said.

To help bridge the learning gap, Soriano decided to personally bring books to the children. Taking its name from the Spanish words for the library (“Biblioteca”) and donkey (“burro”), Biblioburro began more than two decades ago. “I visited each of their homes and I realized there was a real lack of books,” Soriano says.

IT’S  NOT EASY TO TRAVEL THROUGH THE VALLEYS

When he began operating in Colombia’s mountainous Magdalena Province, in 1997. The area was difficult to access by car, so donkeys were an ideal solution.

Using specially designed saddlebags, mobile libraries carried on the steep and narrow paths in the region on each sturdy donkey can carry up to 150 books. Luis’s territory is also that of armed rebel groups. But according to him, the media coverage of his initiative has received has meant that he is relatively safe from attacks.                                Soriano asked Gossain, a Colombian Journalist for a copy of his book to be distributed on the Biblioburro.

The response created a flood of book donations and Soriano’s collection soon expanded to 4,800 volumes. In addition to the biblioburro program, he and his wife built the largest free library in Magdalena next to their home. The library has 4,200 books, most of which are donated — some from as far away as New York City. They also run a small community restaurant.

LITERATURE IS HOW WE CONNECT THEM WITH THE WORLD

Children’s adventure stories have remained one of the most popular items distributed by the Biblioburros. In addition to encyclopedia volumes, novels, and medical texts, other items distributed by the Biblioburro include Horacio Quiroga’s animal fable Anaconda, the Dictionary of the Spanish Language of the Royal Spanish Academy and a number of Time-Life travel pictorial books.

At each village, some 40-50 youngsters await their chance to get homework help, learn to read or listen to any variety of tall tales, adventure stories and geography lessons Soriano has prepared. More than 4,000 youngsters have benefited from Soriano’s program since it began in 1990.

FOR THE LOVE OF BOOKS

Colombian documentary filmmaker Carlos Rendon Zipagauta has made a film that tells the story of Soriano and the Biblioburros.

Soriano has spent nearly 4,000 hours riding his donkeys, and he’s not traveled unscathed. In July 2008, he fractured his leg when he fell from one of the donkeys. In 2006, he was pounced on by bandits at a river crossing and tied to a tree finding out he had no money. Despite these injuries, which left him with a limp, Soriano has no intention of slowing down. In June 2012, Soriano had a leg amputated after an accident. But as of January 2013, he continued committed to his work.

With the help of several NGOs, Luis expanded his traveling library to 22 “Biblioburros”, led by a team of volunteers. His initiative reaches well beyond his home province. His sudden fame notwithstanding, Luis continues to cover eight country schools near his hometown himself.

Read Also: Have you seen the “Rat temple of Rajasthan”

8,359FansLike
2,100FollowersFollow
224FollowersFollow
Previous articleHave you seen the “Rat temple of Rajasthan”
Next articleLet’s Float In The Floating Island Of Loktak Lake

14 Inch Curly Wig- Useful To Give You Natural Look