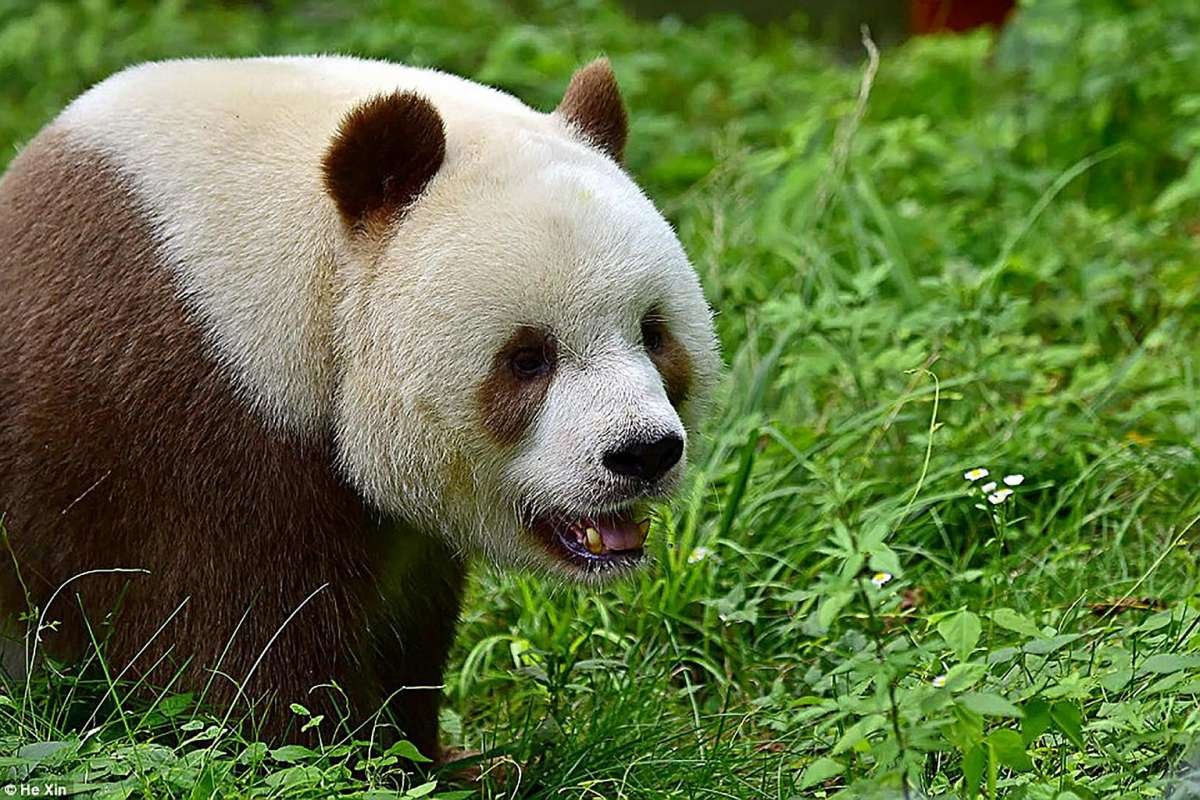 The first brown pandas were found in the 1960s in the Quinling Mountains, but it was not until 2005 that they were recognized as a subspecies of pandas.

When researched on, scientists came up with the conclusion that the brown fur could be a consequence of either environmental effects or recessive genes. This was on the basis that when black and white pandas were mated with the brown and white ones earlier, the offspring that they produced was black and white.

These are a very rare species and only 7 brown pandas have been discovered so far, out of which 6 couldn’t make it long enough.

This is Qizai. He is the seventh brown panda to be ever seen and is also the healthiest out of all of them. The literal translation of his name is “the seventh son”. Residing in the Foping Panda Valley in Shaanxi province, he is known to be the only brown panda in the world at present.

Qizai was abandoned by his mother when he was only two months old and was also bullied by other pandas as a cub, which would eat his bamboo. He had an upsetting early childhood which was very unfortunate. However, his friends at Shaanxi Rare Wildlife Rescue rescued him when he was 2 years old, where he was provided medical treatment and was fed on panda milk obtained from other pandas. About two years ago, Foping Panda Valley adopted him and have been taking utmost care of him ever since. He is now 7 years old, and a celebrity around the world and is totally adored by one and all.

He also has a personal caretaker named He Xin who is at constant service of Qizai from 6 am till midnight, making sure that all the needs of the panda are met and that he gets a good night’s sleep. Mr. He says that Qizai is a very happy and calm little one who loves to feast on bamboo. That he might be a little slow compared to other pandas with processing words while responding to his name, and also in eating, yet is the cutest of all.

He is given five meals a day and weighs around 220 lbs today. He eats about 44 pounds of bamboo, and a lot of milk and Chinese buns throughout the day.

A mate is being searched for him so that he finds company and can reproduce. It is expected that brown pandas can be understood better by studying the off-spring of Qizai.

Mr. He also tells us about the varying colour of different pandas which belong to different regions of China. Pandas belonging to a province in central China called “Shaanxi” have a lighter fur colour when compared to the ones from south-west China’s “Sichuan” province. Some of them are said to have brown colour fur around the belly area. However, Qizai is the brownest of them all.

Isn’t he just a fine example of cuteness overload?