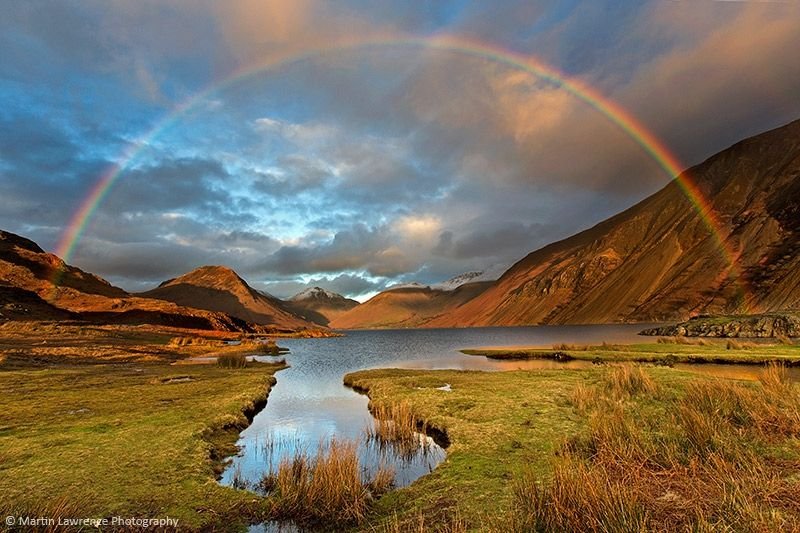 Everyone knows what a rainbow is. Most have even seen it multiple times. But, have you ever seen an upside down rainbow?

A rainbow is formed as a result of reflection, refraction, and dispersion of light on striking water droplets. What this means is that white light splits into its constituent colors (VIBGYOR) in the form of an arc. Rainbows formed due to sunlight appear in the direction opposite to the sun. Although rainbows can be full circle, most only tend to see an arc.

In a primary rainbow, the arc shows red on the outer part and violet on the inner side. This rainbow is caused by light being refracted when entering a droplet of water, then reflected inside on the back of the droplet and refracted again when leaving it.

In a double rainbow, a second arc is seen outside the primary arc and has the order of its colors reversed, with red on the inner side of the arc.

This is all about rainbows. But what about an upside down rainbow?

Halos and Upside Down Rainbows

Firstly, upside down rainbows do exist. They aren’t that common though. Secondly, they aren’t rainbows. Well not technically. This is because both are a product of different phenomenon. Upside down rainbows or circumzenithal arms are actually a type of halo. Halos are a family of optical phenomenon produced by the interaction of light with ice crystals suspended in the atmosphere. In fact, the upside-down rainbow is one of the brightest and most colorful members of the halo family. Additionally, its colors, ranging from violet on top to red at the bottom, are purer than those of a rainbow! Due to its arc-like appearance, the circumzenithal arc is also referred to as a ‘smile in the sky’. Contrary to popular belief, the circumzenithal arc is not a rare phenomenon. It just tends to be overlooked since it occurs so far overhead.

Another example of a halo is what is called a ‘sun dog’. A sun dog is an atmospheric phenomenon. It consists of a bright spot to the left and/or right of the Sun. A pair of sun dogs often flanks the sun. They can be seen anywhere in the world and during any season, but they aren’t always obvious or bright. Sun dogs are best seen and are most conspicuous when the Sun is close to the horizon.

It is noteworthy, that it is worthwhile to look for a circumzenithal arc when sun dogs are visible since the same type of ice crystals are responsible for both phenomena. So be sure to keep a lookout!

Read Also: This Is How You Can Heal Yourself Easily Through Solfeggio Frequencies!

The life of a soldier is attributed to diligence, hard work, sacrifices, orderliness, and discipline. They carry themselves in a sophisticated manner, and it...
Read more

Mukbang and ASMR eating has been the ongoing trend of this "new generation," which is usually on the phone screen, scrolling through social media...
Read more
Previous article
Do You Know About Australia’s Biological Warfare Against Rabbits?
Next article
Why Do People Cover Their Head During Worship? Know the Reasons.