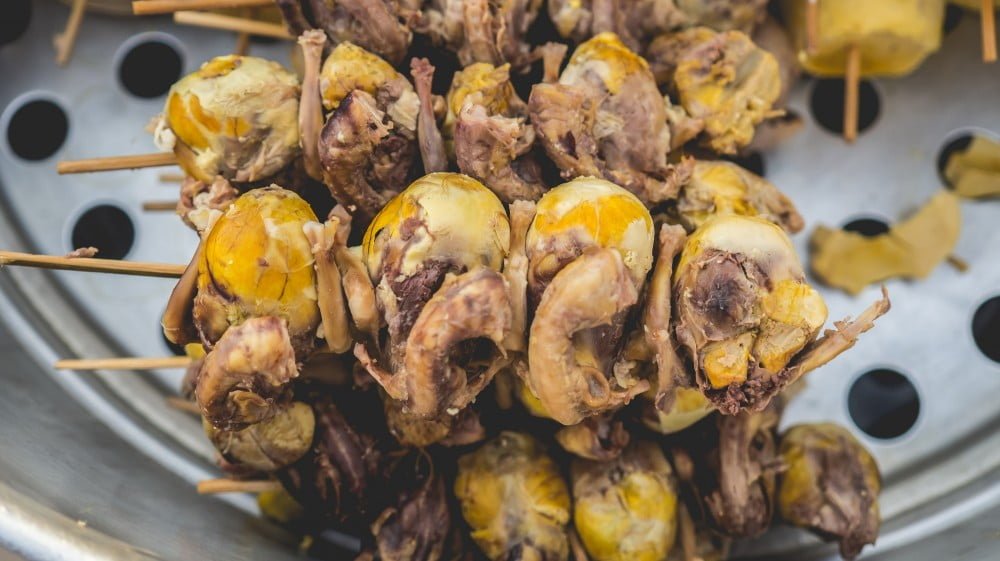 Have you tried all the well-known dishes in every country? Or have you ever thought of the weirdest dishes that are served across the globe? Yes, you guessed it right! All we are going to read in this article is about 15 of the most unbelievable and weird dishes that you sure wouldn’t have known before. So let’s get started!

It tastes somewhat similar to a squid. These can be found in most Japanese stores and will not cost you more than a pound. You might find it quite awkward but in reality it is quite tasty as it is surrounded by fish fat.

Did you know about the mopane worms that feed on the leaves of the mopane trees during the summertime? These fat worms are cooked and served with some added chili sauce to add flavour. However, these can also be eaten dry and crispy. Must give it a try I suppose.

Bird’s nest soup can also be used as a form of medication that can be used to cure digestion. The soup is made out of the hardened bird saliva. SO basically it’s a bowl of spit that should best be taken on an empty stomach. And to your surprise, this has also proved to be a good supplement for growing children.

This may sound weird but it is a healthy choice especially if you want something that is low in fat and high in protein. This meat can be from any of the species of kangaroo and may taste you something in between a venisson and buffalo meat. go for it!

So do you have the heart of seeing a little, poor, old creature’s heart taken out right in front of you? And not only this but that heart being placed in a glass and you have to sink it in?

We all love cute little puppies but only when it’s not the case to eat them up. This may sound uneasy but dogs are not only served as food in China but in Korea and also in Vietnam. Dog meat is believed to provide you warm in winter and is also good for the liver. This breaks my heart!

This is a duck embryo that is boiled alive when it is in its shell. It is a common street food and is quite pleasant and in fact tastes somewhat like chicken. It is similar to the way an egg is boiled, balut as well should be boiled for 30 minutes before eating.

These are the larvae of the ant species that lay their eggs in the roots of maguey plants. Of course, it’s harvesting is not as easy as one takes it to be. These are tiny, white and shiny. These are generally eaten the same way as an omelette and are rich in fat and protein.

Muktuk is the traditional meal in Greenland that is made of frozen whale skin. It is deep-fried and served with soy sauce but can also be eaten raw. It has also proved to be a good source of vitamin C, Vitamin D but it also contains PCBs.

Thought of eating these chocolate covered locusts with honey? This may sound awkward to many but so was the idea of eating a grasshopper. So Israelis have been putting an end to locusts by doing nothing but eating up them.

We all have eaten boiled eggs, in fact, many of us love boiled eggs but have you ever eaten a rotten egg or have you ever thought of eating one? Well, many in China do!They store the eggs under the clay for several months after which the yolk becomes dark green and stinks sulphur.

Chicken feet are often considered waste when farming chickens, because most people don’t consider them an edible product.  In many Chinese dishes, chicken feet are fried and seasoned, or marinated and simmered, and referred to as “phoenix claws.”  The Koreans stir-fry chicken feet with hot chili sauce, while Jamaicans make a soup with the feet as a delicacy.

Among France’s national delicacies are frog legs. Despite being a staple of French cuisine, the dish is most popular in Eastern France.  Butter, garlic, and parsley are traditionally used to cook frog legs in France.   Many Asian and European countries also enjoy eating frog legs. A Cantonese dish made with frog legs is served in Sichuan, where frog legs are deep-fried.

Native Canadians consume Jellied Moose Nose as a delicacy. Native Americans ate moose frequently because it was abundant in the region. Utilizing the entire moose, including its nose, is enough to keep a family fed for weeks. The hair on the moose nose is removed by skinning or burning it. After the nose is boiled, it is sliced into small pieces.

Next time you’re on vacation, will you try these weird foods?

Learning about cultures is best done through food, but there are many other ways to learn about the world. It is possible that the food you love has been passed down from generation to generation and these weird foods are a result of years of history.

The human body is much complex than we can ever decipher. There is so much immaculate detailing on every inch that no amount of...
Read more

At the first glance, James Harrison would seem just like any other ordinary guy, who loves his daughter and grandchildren, collects stamps, and travels...
Read more

Planning a wedding is an exciting time. You’ve probably been excitedly chatting about an abundance of ideas you’ve both has since the engagement, and...
Read more
Previous article
Add Curry Leaves in Your Diet to get Amazing Benefits
Next article
The Biggest Trend in Interior Design: Say Hello to Concrete!