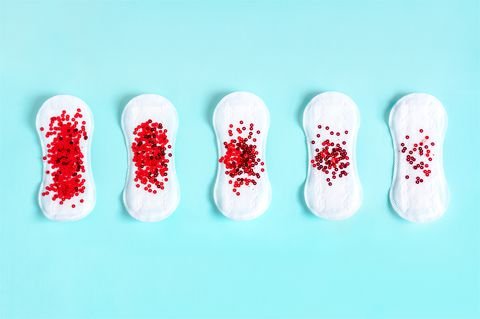 womenhealthmag.com
Can’t touch plants on your period? Shouldn’t wash or cut your hair? Shouldn’t indulge in coitus because it can kill your partner? Or baking bread during your cycle is a good idea? Menstruating women have been told these things time and again.
In many historic cultures around the globe, periods have been considered sacred and powerful whereas, in some other cultures around the world there are customs that restrict menstruating women and consider menstruation as an impure act.

Let’s have a quick sneak peek on the weird and wacky menstruation practices around the globe.

Table of Contents show
1 1. First menstruation? It’s a call for celebration in South India.
2 2. Menstruation is considered impure in several cultures.
3 3. Slaughtering of goat in South Africa
4 4. The weird culture of The Philippines
5 5. Honoring menstrual blood to the Bauls of Bengal
6 6. The very strange and wacky culture of Ghana towards periods.

1. First menstruation? It’s a call for celebration in South India.

The first menstruation of a girl is celebrated by the whole family and the celebration is usually as big as a marriage. It is considered a sacred day because this day marks her transformation to a woman.
On the last day of her periods, she is given a bath by her mother and other women. She gets new clothes and ornaments to wear as per the rituals. She is given a lamp and the griha pravesh ceremony is performed. It is considered to be an important event in the girl’s life.

Menstrual Isolation is a common practice in India, Nepal and Bali. The girls are not allowed to enter the kitchen or to enter the house. This is one of the major reasons why these women do not feel comfortable talking about the problems they face during their periods. In some tribal cultures, menstruating women are asked to live inside of “Special Huts” during their periods.

3. Slaughtering of goat in South Africa

Some nomadic tribes of South Africa have a very weird and special ritual for the girls who starts menstruating. She is secluded from her friends and a goat is slaughtered. The next day she is smeared with red clay after thorough bathing and the other tribal women gives her lessons on womanhood.

4. The weird culture of The Philippines

During her first period, the mother soaks the bloodstained underwear in water, and later the same water is used to smear the daughter’s face.

5. Honoring menstrual blood to the Bauls of Bengal

A group of mystic minstrels, Bauls from Bengal, includes a group of people who sing Baul songs and beg for a living. They have a very different view about periods and menstrual blood.
Having intercourse with a menstruating woman is not taboo for them. Their ideology also includes ingesting menstrual blood. For these people, menstrual blood is a regenerating substance which brings love, prosperity and happiness.

6. The very strange and wacky culture of Ghana towards periods.

When a girl gets her first period, she’s asked to swallow a hard boiled egg and if she fails to do so or simply takes a bite of that egg then it is considered to be a very bad omen for her future children.
How many of these beliefs have you come across? Do you feel that the wacky attitude of people towards menstruation has changed with time?
Read Also: Period Superstitions from around the World